One day Mr. Gilbert came to Japan for his business trip, he had a very valuable opportunity.
It was a dinner with a professor who was studying the smart grid and power network innovation at a famous Japanese university. He had never thought about the power network and the power supply mechanism before, however he was interested in the latest professor’s study and learned the power network was becoming surprisingly smart.

Mr. Gilbert asked the professor what the "smart grid" is because he had never heard about it. The professor answered "Smart grid” is also called the “next generation power transmission network”. It is a system that aims to improve the electricity supply system by integrating and controlling power regulator devices between the supply and destination source.

Currently private power generation with renewable energy such as the photovoltaic (solar) power systems are increasing. Now the direction of power control in the smart grid is not only one way from the electricity transmission network to the supply destination. It also utilizes the electric power generated by the private power devices. It is now necessary to consider both directions of electrical flow.
Furthermore when controlling the power regulator apparatuses throughout the power generation network they must be synchronized with each other while operating independently or the power becomes unstable. Time synchronization of each power control apparatus throughout the system is very important to ensure overall network accuracy. 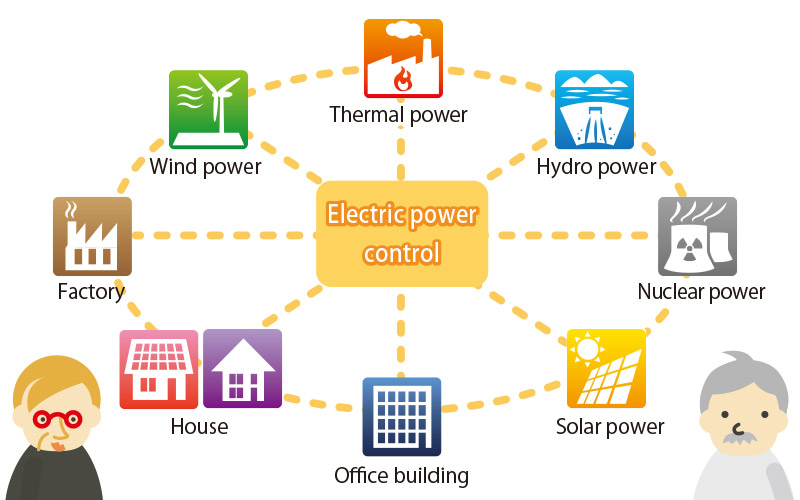 "How do we ensure accurate time synchronization between power devices at remote locations?"
Mr. Gilbert wondered, as the professor continued that when using GNSS/GPS it was possible to realize time synchronization with microsecond or nanosecond precision. The GNSS/GPS is typically known for car navigation systems and smartphones. The GNSS satellites are equipped with very precise atomic clocks. This means that by using the GNSS receiver it is possible to acquire Coordinated Universal Time (UTC), which is the world's high accuracy absolute time. Each power control device operates using this universal time to achieve time synchronization and stable power control throughout the power grid.

Power and GNSS. The professor continued explaining further to Mr. Gilbert who was curious about the surprising combination. "However when relying only on GNSS/GPS, if the signal cannot be received for some reason such as jammed or multi-path signals, a GNSS/GPS antenna failure due to a lightning strike, etc. the GNSS/GPS will stop synchronizing the system. GNSS/GPS receivers with an additional function for continuing to output high precision time are necessary for smart grid infrastructure systems."

The function was called “Holdover” and was incorporated in equipment called GNSSDO (Disciplined Oscillator).
Mr. Gilbert thought "In the future, GNSSDO units equipped with the holdover function are likely to expand in power infrastructure equipment". He asked the professor more about the smart grid.

The GNSSDO previously mentioned above is an oscillator that can output high precision time pulse (1 PPS). The reference frequency is controlled by an OCXO that ensures GNSSDO high accuracy time. That is why it is called GPSDO (GPS Disciplined Oscillator) or GNSSDO (GNSS Disciplined Oscillator).
Today GNSSDO units are widely used for systems requiring accurate time, reference frequency and timing synchronization. These systems include social infrastructure, terrestrial digital broadcasting station, mobile phone base station, various wireless communication systems and grand master clock applications. FURUNO Multi-GNSS Disciplined Oscillators are also approved for the various social infrastructure facilities mentioned above. By simultaneously receiving multiple GNSS (GPS / GLONASS / QZSS / SBAS) signals, you can acquire more accurate timing information and more stability. In addition the holdover function that outputs timing information with high precision even when the GNSS signal cannot be received also achieves the world's highest class performance. Our GF-8805 achieves a time pulse accuracy of 1.5 μs / 24 hour. We have a complete and large range of products including different size, scalable footprints and cost for all customer requirements.