* GNSS (Global Navigation Satellite System)
A GNSS receiver is a system receiving signals from several constellations of global navigation satellites to provide position, velocity and time data.
GPS of USA, GLONASS of Russia and Galileo of Europe are all GNSS.

Network timing synchronization by GPS/GNSS timing receivers; is it essential for day traders?

Mr. Gilbert is a day trader. One day, he suddenly came across with a question to himself.
"Trade prices can change so quickly, like within a second. As a day trader, a loss of time could crucially affect my business.
So it is not acceptable at all if there is a loss of time caused by poor networking. Now I cannot stop chasing the reality.
Does the security brokerage company I am using has a solid network system?"

Mr. Gilbert started by himself an investigation into the loss of time in security trading systems. After a while, he found out that such systems are capable enough to host super high-speed and heavy calculations, even down to a millisecond order, which surprised and also relieved Mr. Gilbert. In fact some of the security brokerage companies feature their significantly short latency in their promotional materials. Latency is usually referred as a criterion to show how durable the system is in terms of a loss of time.

Mr. Gilbert got deeply fascinated by the fact that day trading systems have been running in a significant way, which can support millisecond order transactions.
When he continues to study further on the way of managing the day trading systems, he found a very interesting article saying that GPS/GNSS technologies are used to determinate the system latency in the millisecond order or even less.

How come GPS has something to do with establishing the time and detecting latency with such accuracy?
Mr. Gilbert learned that GPS/GNSS satellites have a highly precise atomic clock and therefore a GPS/GNSS receiver gets the UTC time information from the satellites, which is an universal and absolute time information. In fact most of the security brokerage companies, as well as banks, obtain UTC information by the mean of GPS/GNSS receivers. Integrating the UTC time with time synchronization systems enable these firms to supervise the latency at sight.

Knowing what is behind the day trading system he relies on, Mr. Gilbert is relieved to know that the system has been running very safely.

The key element of PTP: the Grand Master Clock (GMC)

The most suitable GPS/GNSS Disciplined Oscillator for the GMC

The time information source implemented in the GMC should be one specially designed for timing application. As long as the GMC can properly synchronize with the GPS/GNSS satellites, it can receive highly precise time information and it is not required to perform a time calibration on a regular basis.

Furuno GF series offers a wide range of disciplined oscillators. GF-8801/8702/8703, the low cost models of the GF series, also have the industry's smallest size. GF-8805 is featured by its highest quality of holdover performance as well as its very low noise-phase. Furuno provides the best suitable options to those who have different types of requests in terms of size and performance. The GF series typical applications for are the GMC, wireless communication infrastructures and broadcasting equipment. They are also suitable for those who consider replacing atomic oscillators with a more cost effective solution.

We provide technical white papers for each of the typical failures caused by GNSS receiver. For each failures, our experts in time synchronization explain details about countermeasures on receiver side, using diagrams to show the effectiveness, and how to select products. If you are considering a GNSS receiver for the first time, please take a look. 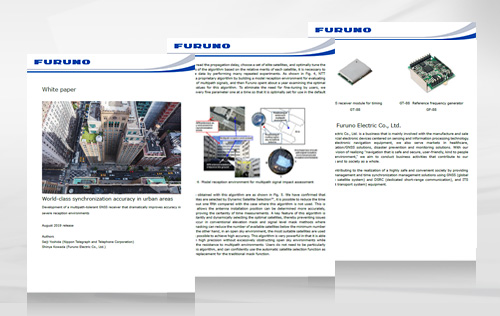