Articles for ITS market Japan’s automated driving project "SIP-adus" will be a large demonstration experiment.

This year’s international conference of autonomous driving attracted 400 people from around the world. 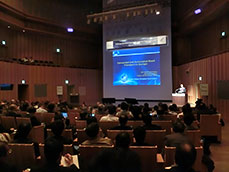 It was the third time that the workshop has been held. There were about 400 participants. 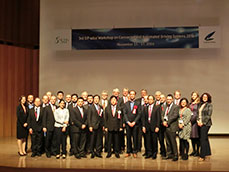 Stakeholders who took part the events such as Japanese government officials and invited foreign visitors. 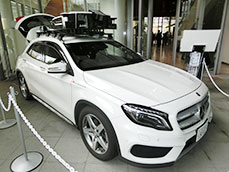 The Japanese government is promoting the strategic innovation and creation program (abbreviated as SIP) as the core strategies growth and development for the next generation’s science and technology.
SIP has ten sectors, one of which is autonomous driving. The project name is called SIP-adus (automated driving for universal services). Many private enterprises including automobile manufacturers, automobile parts manufacturers, cartographer companies and educational institutions such as universities are cooperating with related administrative ministries and agencies.
The four relevant ministries and agencies are discussed below.
The Ministry of Land for infrastructure and transport of vehicles and roads, the Ministry of Economy for trade and commercial side of automotive industry, the National Police Agency for traffic laws and the Ministry of Internal Affairs and Communications for the vehicle's communication. It is the Cabinet Office who controls this industry-academia-government collaboration.
Since 2014, SIP-adus began research and development of cooperative areas that should be tackled jointly by industry, academia and government for autonomous driving. In addition, from 2016 they have been developing an intensive discussion and examination regarding the following five issues as very important technical topics. High precision 3D digital map (commonly known as dynamic map), Human machine interface (HMI), Information security corresponding to cyber security, Reduction of pedestrian accident and Next-generation urban transportation.
Also the Cabinet Office is holding a SIP-adus workshop every year in Tokyo as a place to discuss trends of SIP-adus to the world from 2014 to current. For the outline of the meeting it is stated as "an international conference to discuss tasks for sharing and solving issues with Europe, the US and Asia Pacific experts in order to realize the autonomous driving system."

Details of large demonstration was announced. 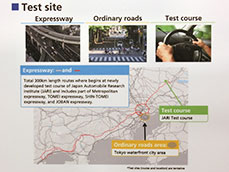 The SIP demonstration test will be conducted in the Tokyo capital highway, the new Tomei highway and a part of Joban expressway and the Tokyo coastal area. 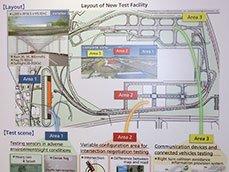 A schematic diagram of the experimental facility for the autonomous driving newly established at the Japan Automobile Research Institute in Ibaraki prefecture.

This year's workshop was held from 15th to 17th November and I covered the entire discussion onsite. The topic that attracted the most attention was the announcement and outline of large demonstration experiments to be implemented during the next fiscal year.
Accordingly, from the end of November 2016 to May 2017, the technical specification of the experiment will be summarized and it will be discussed by stakeholders. Registration for participation will be held around June 2017 and the verification experiment will be conducted for about two and a half years from September the same year until March 2019.
The area of the verification experiment is about 300km including the Tokyo capital highway, the Tomei and the new Tomei highway and a part of Joban expressway. Moreover there are general roads around the Tokyo coastal area and the simulated urban area test courses that are newly established within the Japan Automobile Research Institute in Ibaraki Prefecture.
Government-led demonstration experiments that use such public roads in a wide area are rare in the world. In the United States makes exceptions where the presence of fully automated Google car stands out. Local governments, such as California State and Arizona State, have responded to individual regulations concerning the autonomous driving.
In September this year, the US Department of Transportation just released guidelines for having a common recognition of autonomous driving in the United States however is still time consuming to coordinate with local administrations. Among them, the implementation of the autonomous driving demonstration, "smart city" will be held in Columbus, Ohio as a national project from next year. However, details are still undecided.
In addition in Europe, both British and Norwegian governments are showing a positive attitude towards the practical application of the autonomous driving. The large demonstration using Volvo's SUV will begin in Gothenburg City, Norway from next year. Also, in China, Baidu, Alibaba and Tencent which are major IT companies will conduct their own verification experiments. In collaboration with BMW and car manufactures in China but the actual situation is not yet disclosed.
Therefore at present it can be said that Japan's SIP-adus is an important step for leading the world in technical development concerning autonomous driving. 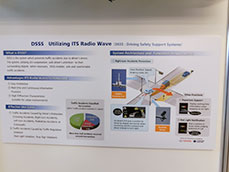 A system outline of V2X utilizing the 700 MHz band being processed by the National Police Agency. 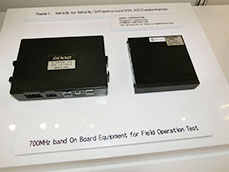 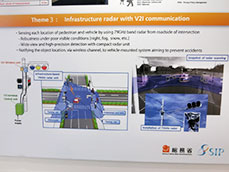 A monitoring system for intersections using the 79 GHz band that the Ministry of Internal Affairs and Communications is processing.

In Japan the spread of car navigation systems is the fastest growth in the world. Practical use of communication related to automobiles such as VICS of road traffic information system and ETC of charging system on expressway continues to advance.
Such fields have been called ITS (Intelligent Transport Systems) so far and Japan has taken a central role at the International Conference's ITS World Congress.
However, another kind of discussion in the ITS industry has been needed in recent years because the movement towards the practical application of the fully autonomous driving by the IT industry and startup companies in the US. Also the ride sharing system is expanding very rapidly. In fact even the SIP-adus, some European automotive manufactures and the US Department of Transportation mentioned "In the near future of the automotive industry, the uncertainty factors would be larger due to the influence of ride sharing".
Under these circumstances in order to upgrade the basic technology of ITS, that we have cultivated to the practical stage, Japan must strengthen the promotion of V2V (Vehicle to Vehicle Communication), V2I (Vehicle to Infrastructure Communication) and V2P (Vehicle to Pedestrian Communication).
In order to demonstrate such situations there was a booth at the poster session in the SIP-adus workshop and there were detailed descriptions, movies. And the devices used that actually concern the five important topics in the autonomous driving I mentioned above.
Specifically the 700 MHz band V2X that the Metropolitan Police has partnered with Toyota, DENSO and others. They will be collaborated with the Global Navigation Satellite System (GNSS) including the QZSS. This is what Toyota announced as "ITS Connect" in October 2015 and now are installing transmitter and receiver equipment in Tokyo, Nagoya and Toyota city and so on. In the case of the 700 MHz band, the Japanese government thinks that the radio wave is bigger than 5.8 GHz band and 5.9 GHz band used by Western countries and it is suitable for communication in urban areas surrounded by tall buildings. That is why SIP-adus will proceed with the Demonstration experiment aggressively.
Also the present state of a development was introduced in detail. It was the system that informs the cars position to a pedestrian's smartphone in the form of keeping the inter-vehicle communication by monitoring the traffic situation at the intersection with the 79 GHz radar conducted as it is operated by the Ministry of Internal Affairs and Communications.

After the completion of the SIP-adus demonstration experiment in March 2019, the Japanese government will be set to roll out a full-scale next generation V2X practical stage with the Tokyo Olympics and Paralympic Games.