Articles for ITS market Rapid development of sharing economy 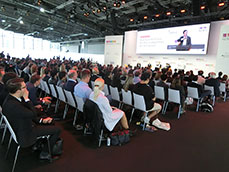 The 2nd New Mobility World was a great success.
A panel discussion on sharing economy companies was held on the main stage. 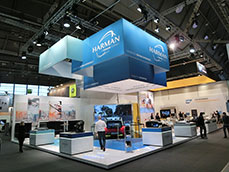 The integration of EV, AV, CV and MaaS advances cooperation between the automobile industry and the communication industry. Samsung Electronics in Korea acquired Harman, a major automotive component company in March 2017. The newly acquired Harman had an exhibition booth at the show. 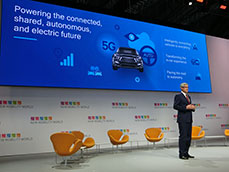 Keynote lecture by Steve Mohrenkov, a CEO of QUALCOMM at New Mobility World.

The New Mobility World Show, which is being held jointly at the IAA (International Auto Show: Frankfurt Motor Show) in Frankfurt, Germany, was a great success. New Mobility World is an event to introduce the fact that industry, academia and government are talking about the next generation of transportation and automobile industry to the people in the automobile industry who visit the show. The first meeting, held at the Frankfurt Motor Show two years ago, did not meet the expectations of the organizer because the number of visitors was quite small. However this year was a great success as there was much higher attendance and the flow of people was strong during all the days of the Show. Those changes reflect the influence of time and the change that the automotive industry is now facing.

In the IAA, so-called German three (Daimler, BMW and VW) announced their Production Model and Concept Model about the Electric Vehicles (EV), Automated Vehicles (AV) and Connected Vehicle (CV). These three "V’s" are trends in the worldwide automobile industry and major automobile manufacturers such as Bosch, Continental, and Delphi are rushing to develop products. There is also the service area that closely cooperates with the three "V" and it is called “MaaS” (Mobility as a Service). Under such circumstances, major IT, electronics, and communications companies also expanded the business related to the three "V" and at the second New Mobility World. An example is that the major semiconductor company QUALCOMM, had their CEO, Steve Mohrenkov, presenting the opening keynote lecture.

From the ride sharing (Passenger) to the commercial sharing (Logistics)

The concept of MaaS covers a very wide business area, but the most of the attention was given to sharing.
The sharing business has rapidly increased in recent years such as “Air B&B’s” which rent private owned houses to the travelers and the “Ride sharing” which uses private owned vehicles as taxis like the Uber and the Lyft in the Western countries, China and Southeast Asia. In the second New Mobility World, lots of ride sharing companies launched their own booths like the European and the US ride sharing companies as well as the Chinese bicycle sharing company which has been rapidly growing since last year in China.
Under such circumstances, “Commercial sharing" is expected to be the future trend.
"Commercial sharing" here means “Logistics sharing”, not “Passenger ride sharing”.
As an example of a demonstration experiment that has been carried out up to now in the commercial sharing, Audi cooperates with DHL, a major logistics company, and doing the demonstration. Specifically said, they try to use an individual owned car for the delivery and testing a system that can lock and unlock the trunk of an individual owned car by an electronic key.
However, the commercial sharing is unlike C to C (customer-to-customer) business such as private houses and ride sharing. It is basically built in B to B (between operators) business model. In the C to C, the commercialization could be completed quickly because it is mainly up to the development of smartphone applications. However, the B to B model needs long term efforts because of the balance and negotiation between existing operators or administrative organs is required.

What will the Logistics Sharing be like in the future? 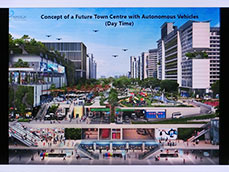 A state of urban transport in the future introduced by the Singaporean government lecture. Buses and commercial vehicles run underground. 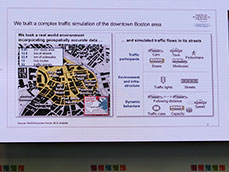 An illustration of a demonstration test on traffic related in Boston City, introduced in the announcement by the World Economic Forum.

There are two cities which have had good case studies on promoting advanced plans for the Logistics Sharing, one is Singapore, and another is Boston, Massachusetts.
At the second New Mobility World, officials from the Singapore Ministry of Transportation and an officer of the World Economic Forum who is an Advisory on Boston City's transport policy, provided lectures and explained the Logistics Sharing in the future.
What I was interested in the most was the plan of Singapore. It makes all the traffic in the city built underground. Commercial buses and taxis will be arranged on the first basement floor and passenger cars will be restricted from that level. The second basement floor will be used for logistic distributions, for example, an exclusive transportation to the back of large shopping malls. Furthermore, several stores in the malls will share the services of logistics service. Singapore is a small country, the total area is less than Berlin in Germany, but five million people live there and numerous types of companies are doing their business there. Therefore the traffic is always an important issue. In response to such circumstances, the Singaporean Government will proactively utilize the latest technologies of EV, AV and CV, and promote the practical application of MaaS including new logistics service.
I am expecting that many cases of MaaS involving Cars, IT, Communications and Logistics industries will be developed in Japan as well.