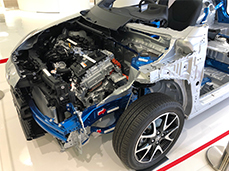 Technological exhibition of Prius. Much of the equipment related to the driving performance of the car is controlled by the software of the in-vehicle ECU.
Photographed by the author at the Toyota Hall in Toyota City, Aichi Prefecture

Toyota will start a new phase with the connected cars.
In KINTO subscription models, the challenge is to develop cars that evolve along with people.
This refers to Toyota's initiative and periodic renewal of software for various in-vehicle systems.

In-vehicle systems here are those related to the vehicle's driving performance, such as "driving, turning, and stopping," and reflect the latest software in line with technological innovation.
Generally, car driving performance is mainly composed of car body (Platform), suspension and powertrain which are the skeleton of the car, and aerodynamic effect by the body shape also affects driving stability and fuel consumption (Electric consumption).

Then, the driving performance which can be changed by the software programming includes output characteristics and torque characteristics of the engine, transmission shift timing, four-wheel drive system by electric motor, ESC (Electronic Stability Control) which controls the attitude of the car in the cornering, and weight (Resistance Force) in the power steering operation.
There are many product strategies in which car manufacturers change their models to new models in five to six years. In the meantime, additional minor changes in appearance and interior about two times, and there are cases in which in-vehicle software upgrading is also carried out.

However, if a new car is sold from the dealer to the customer the car manufacturer will rarely update the software of the existing car to the customer unless there are technical defects, such as recalls, or other issues.
Toyota intends to use KINTO to dramatically change the process of new car sales. 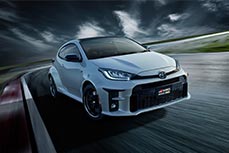 The first step in updating and customizing data in KINTO is the GR-Yaris Morizo selection, a high-performance model. Source: Toyota

Why is it introduced in the GR Yaris?

In the current announcement by Toyota, the high-performance model of the limited production GR Yaris is the initial vehicle.
Regarding the reason, Toyota Executive Officer, who held an online conference, explained, "Because they adopted the agile development which Toyota achieved through various racing activities.".

Agile development is a method of development that aims at achieving the goal while continually modifying the process in short periods of software development trial and error.
In racing activities, to shorten the lap time it is necessary to increase vehicle durability in a short period of time through changes in weather conditions, changes in the performance of major components such as tires, and feedback associated with racer experiences, while adhering to regulations.
Therefore, agile development, in which software changes are carried out in a short period and results are produced, is required.

Agile development is naturally carried out in the top categories of global racing such as Formula 1 (F1), World Endurance Championship (WEC), and the World Larry Championship (WRC). But within Toyota, in recent years, Mr. Akio Toyota has been regarded as an important part of Toyota's internal team, Rooky Racing, in which the President of Toyota acts as a driver. Recently, Rooky Racing took part in the 24-hour endurance race held at Fuji Speedway in May 2021 with the world's first hydrogen-powered race engine-mounted vehicle.
Based on this racing experience, the company decided to develop full-scale agile software for the mass-produced GR Yaris high-performance model vehicle with a strong emphasis on driving among mass-produced vehicles.

Regarding the update of the data, customization is also carried out according to features of the driver's driving as is done in the race. This is the "Personalization integration."
The GR garage in various parts of the country is scheduled to begin responding by the spring of 2022.
Toyota officials say, "We want to incorporate software update techniques included in the GR Yaris for all Toyota vehicles in the future." 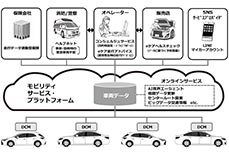 A schematic diagram of a data management system using in-vehicle data communication module (DCM), which Toyota has been introducing in earnest since 2017. Source: Toyota

Why will the new businesses be carried out and limited to KINTO?
This is related to Toyota's "Ease of data management."
For KINTO, the new car shipped from Toyota's final assembly plant is owned by Toyota's subsidiary KINTO, and KINTO signs a contract with customers to use the car.

At that moment moving forward, KINTO will obtain the driving data from the vehicle to be used on the assumption of protecting personal data. KINTO notifies customers in advance and then updates the software. In addition, customization of data will be carried out after full discussions between KINTO and customers.
Toyota's new cars are currently equipped with a DCM (Data Communication Module) that transmits driving data to a Toyota-dedicated cloud system at a pace of about once per minute. The system for managing the driving data of the existing cars will be established in stages.
Nevertheless, the system does not provide Toyota with the opportunity to talk directly to customers about in-vehicle data in the commercial distribution, where Toyota manufactures new vehicles and sells them wholesale to dealers, and then the dealers retail them to customers.

In the research and development of the next generation automobile, discussions on collection and analysis of big data and monetization (Commercialization) based on big data will continue for long periods of time.
As evident in the new-business concepts of this KINTO, ownership of cars is a major key to the monetization of big data for cars.