Articles for ITS market Tsuneishi Shipbuilding's building and DX, an exclusive visit to the main factory 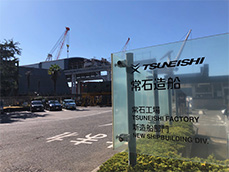 The entrance to Tsuneishi's main factory. Photographed by the author. 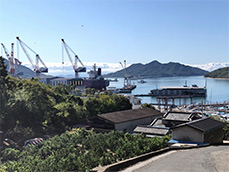 View of Tsuneishi's main factory in Fukuyama City, Hiroshima Prefecture, from Bella Vista Spa & Marina Onomichi in Onomichi City, an affiliate of Tsuneishi Group and adjacent to the main factory. Photographed by the author.

There are a number of reasons why the company has attracted a lot of attention from various industries.
The most recent and most significant impact has been the signing of a capital alliance with Mitsui E&S Shipbuilding (Merchant shipping business), announced on October 1st, 2021.
Mitsui E&S Shipbuilding is one of Japan’s leading shipbuilding giants, having its origins in the former Mitsui Shipbuilding & Engineering's Ship & Naval Business Division.

Since May 2018, Tsuneishi Shipbuilding and Mitsui E&S Shipbuilding have been discussing joint research and development, mutual cooperation in parts procurement activities and personnel exchange in the field of merchant shipbuilding.
In recent years, the Japanese shipbuilding industry has seen a growing number of partnerships, joint ventures and acquisitions. Both in Japan and overseas, as the industry focuses on strengthening its competitiveness in terms of manufacturing costs with foreign companies such as China.
Through this capital tie-up with Mitsui E&S Shipbuilding, Tsuneishi Shipbuilding is expected to make great strides in the field of advanced technologies, such as automatic ship operation.

In terms of carbon neutrality, on September 30th, 2021, an official announcement was made by related companies, including Tsuneishi Shipbuilding, about ships that will be equipped with electric power units.
According to the announcement, Tsuneishi Shipbuilding, in collaboration with Nippon Steel Corporation, NS United Coastal Shipping, Kawasaki Heavy Industries and others, will build a hybrid coastal coal carrier that will utilize a natural gas engine.
The hybrid vessel will measure approximately 93.8m in length, 19.2m in width and 9.9m in depth, with a deadweight capacity of approximately 5,560-ton, and is scheduled to enter service in February 2024 from the port of Shiriyamisaki on the Shimokita Peninsula in Aomori Prefecture to the port of Muroran in Hokkaido.

The author visited Tsuneishi's main factory, the heart of the company, on his own. 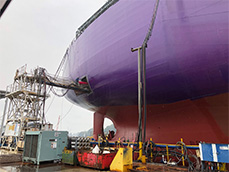 KAMSARMAX undergoes the final manufacturing process at the shipyard. Photo by the author. 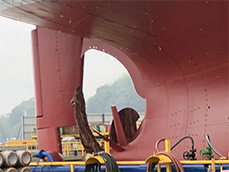 KAMSARMAX’s propeller and rudder, designed by Tsuneishi Shipbuilding. Photographed by the author. 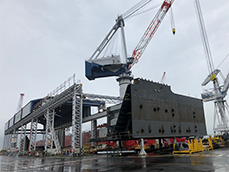 A large module is lifted by crane and moved by a large cart. Photographed by the author. 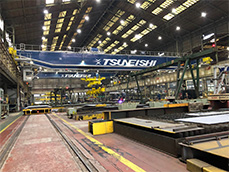 Panoramic view of the factory, where steel plates are sheared and welded. Photographed by the author. 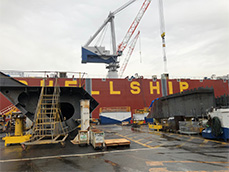 Large welded modules are lined up. Photographed by the author.

Shipbuilding of bulk carriers. What I saw and heard at the site

In the second half of October 2021, I left JR Fukuyama Station for the Seto coast by a rental car.
The first stop was Tomonoura, known as the model for Hayao Miyazaki's Studio Ghibli film "Ponyo on the Cliff by the Sea".
From there, we headed further west along the Numakuma Peninsula, where the road entered a mountainous area, and further on, a shipbuilding area with huge cranes suddenly appeared.

This is Tsuneishi.
Tsuneishi Shipbuilding's head office and factory covers an area of about 500,000 square meters including the surrounding area. It is slightly larger than Tokyo Disney Sea, or about 10 times the size of Tokyo Dome.

We were welcomed by Mr. Takuma Ashida, Exclusive Managing Director of Tsuneishi Shipbuilding Co. Mr. Ashida is the Factory Manager of Tsuneishi Shipyard and is in charge of the factories in China and Philippines. Everyone from various departments joined us for this site visit and an exchange of opinions.
The first thing we saw during our tour of the factory was the ship's berth.

This is the facility where the hull, the main body of the ship, is finally assembled and the completed ship is launched.
At the time of the visit, shipbuilding was being carried out on Tsuneishi's flagship product, the 82,000-ton KAMSARMAX bulk carrier.

The name KAMSARMAX comes from the fact it is the largest size vessel that can pass through the Panama Canal and enter the port of Kamsa in Guinea. It is the global standard for bulk carriers and the best seller in the shipbuilding industry, with some 340 ships having been built here since 2003. The whole shipbuilding process takes 10 to 11 months. Tsuneishi shipbuilding designs the propellers which are propelled by the engine power, and the rudder which controls the ship.

Next, we visited the internal factory (Dock).
The flow of work in the factory is as follows: first steel sheets delivered from steel manufacturers to NC shearing machine to produce materials for parts; and then large press machines to press and bend parts; and finally welding parts and painting processes in a separate building.
In some parts of the bending process, the workers still heat and deform the parts by hand, so that the craftsmanship is still preserved.
Each bulk carrier, such as KAMSARMAX, consists of about 300,000 parts, of which about 100,000 are steel plate related parts.

The structure of a merchant vessel, such as a bulk carrier, is made up of three main elements: the hull which is the main body of the ship; the engine and machinery plant; and the accommodation area where the people involved in the operation of the ship stay.
The hull is manufactured in about 80 modules, which will be raised and assembled by a crane. Some modules are sent to Tsuneishi Shipbuilding's overseas factories to be assembled and then returned back to Tsuneishi Shipbuilding's main factory.

Tsuneishi Shipbuilding currently manufactures about 50 vessels a year at its three factories in Japan, China and the Philippines, with Japan accounting for less than 20% of the total, and the rest being manufactured overseas in view of the production costs. 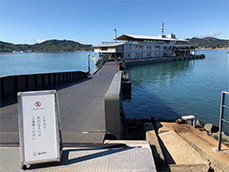 Many people may think that merchant vessels, such as bulk carriers do not undergo frequent model changes like cars do.
In fact, however, even bulk carriers undergo a full model change at a relatively fast rate of once every four or five years.
The reason for this is the constant requirement and update requests from customers.

In recent years, the competition of fuel efficiency has become more demanding, but in terms of development and design, a system for numerical calculation of fluids has been established. And the speed of development has increased, making it easier to change models.
Tsuneishi Shipbuilding is promoting DX (Digital Transformation) not only in such basic design requirements but also in the area of overall management from design to manufacturing.
Exclusive Managing Director Mr. Ashida says, "The effects of DX are definitely appearing." And the company is determined to make effective use of DX within the company to further strengthen its cost competitiveness, and to develop new technologies such as automatic ship operation and hybrid ships.

One of the things that surprised me during my visit was the fact that the price of a new ship is the market value at the time of the sale contract. Moreover, the range of price fluctuations is quite large.
As the global market is moving from "with Corona" to "after Corona", I realized that the key to success in the shipbuilding business is to grasp the changes in supply and demand in the ship market in a timely manner. In addition to the sharp rise in material prices.
We will continue to cover shipbuilding and other ship-related areas on a regular basis.