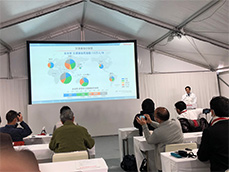 Keiji Otsu, president of Honda R&D, gives a presentation to the press. Photographed by the author. 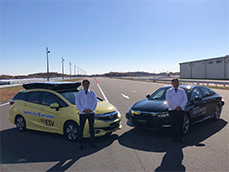 At the end of November 2021, the author participated in “Honda Safety Vision and Technology Report Conference” held by Honda at Sakura Test Course (Sakura City, Tochigi Prefecture).
While there participants were able to experience the various safety technologies that have been introduced to the market in recent years and those currently under research and development.

Honda's safety philosophy is "Safety for Everyone".
Keiji Otsu, president of Honda R&D, reiterated Honda's founder Soichiro Honda's desire to "respect life" and "proactive safety." "We want to create a society where everyone on the road can be safe and not be involved in accidents.”
“Proactive safety” is a concept that aims to create a safe traffic society in which traffic participants do not take a passive stance toward safety, but still enjoy free movement.
This is Honda's corporate principal. "Let your curiosity lead you outward and enjoy the real world with all your senses and sensibilities" (President Otsu).

Now, looking at the social reality, the number of deaths worldwide due to traffic accidents is about 1.35 million per year (WHO, 2018). 392,000, or about 30% of the total death, are related to four-wheeled vehicles, and 378,000, slightly less than four-wheeled vehicles, are related to motorcycles. This is followed by pedestrians at 310,000 and bicycles at 41,000, with the remaining 229,000 classified as other accidents.
By country and region, India has the largest number at 300,000, which is addressed by a high proportion related to motorcycles, at around 40%.
The second highest country was China of 256,000, with pedestrians accounting for up to 30% of the total deaths.
It is clear that the large population of India and China, both in excess of one billion has contributed to the high number of traffic fatalities, but at the same time it is assumed that these are consequences related to the inadequate development of transport infrastructure and responsible safe driving.
Excluding India and China, the rest of Asian regions accounted for 155,000, with a high proportion of traffic fatalities among both motorcyclists and pedestrians.

In developed countries, 85,000 people in Europe and 42,000 people in North America were killed in four-wheeled traffic accidents, accounting for more than 60% of the total number of fatalities in these countries.
On the other hand, the number of Japan is 0.5 million (2,839 in 2020), which is relatively small.
In 1970, the number of traffic accident fatalities in Japan reached a record high of 16,765, due to the spread of private cars as a result of the country's rapid economic growth after WWII. The number showed a rapid downward trend in the 1970s as the Japanese government began to reinforce its traffic policies. Although the number of traffic fatalities continued to increase again in the 1980s, but from the 1990s, the number decreased thanks to the development of collision safety technology and the evolution of preventive safety technology since the 2010s. 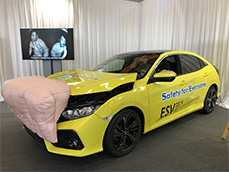 Enhanced collision protection function. An airbag system outside the vehicle (under development). Photographed by the author.

In the midst of these social changes, Honda has declared that its future goal is "to achieve zero traffic fatalities involving Honda motorcycles and automobiles worldwide by 2050.
This is an extremely high target that covers not only new car sales, but also all of Honda's vehicles in the global market, with an intermediate target of halving the number of traffic fatalities in the global market by 2030.

In order to achieve this goal, it is suggested that three areas of mobility performance, transport ecosystem and human capabilities should complement each other and also create synergies.
In addition, since there are significant differences in the traffic environments of countries and regions, safety promotions need to be customized locally.
Particularly in developed countries, 62% of the fatal accident scenes in 2020 will be covered by the technological evolution and increased integration of Honda Sensing, an advanced driving support system. The remaining 38% will be covered by enhanced collision protection function for pedestrians and advanced automatic notification system for accidents.
Meanwhile, in emerging countries, Honda Sensing and the evolution of motorcycle safety technology will contribute 50%, and the remaining 50% will be covered by safety education activities and safety promotion by government agencies. 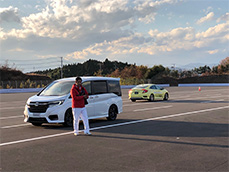 A demonstration of V2P, which connects vehicles and pedestrians through direct communication. Photographed by the author. 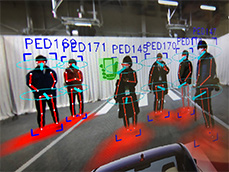 At Sakura test course, we test drove a prototype equipped with Honda Sensing 360, an upgraded version of Honda Sensing that is already in mass production.
The detection capability of each sensor has been improved, especially the use of millimeter wave radar for medium range in the forward diagonal direction.
In recent years, other automakers have introduced advanced safety technologies that use millimeter wave radar mounted on both sides of the front bumper to help prevent collisions at intersections with poor visibility. In most cases, millimeter wave radar uses 24GHz frequency band, and the detectable distance is about 20 to 30 meters. It is installed at both ends of the rear bumper to detect vehicles approaching from diagonally behind lane and to detect the movement of surrounding vehicles when reversing.
Alternately, Honda Sensing 360 seems to use the “70GHz band millimeter wave radar", but the technical details were not disclosed.

In addition, what caught the author's attention was the use of AI (artificial intelligence) to predict the behavior of people and bicycles etc.
The image recognition camera detects the movement of human's major joints and the direction of their faces and predicts the direction they will move. Currently it is difficult for image recognition camera technology for automobiles to detect small/short animals, but in future the developing technology can be improved to predict the movements of small animals.
The research on human behavior using brain science findings was also very interesting.

By 2030, the company aims to halve the number of traffic fatalities from the 2020 level Beyond that from 2030 to 2050, it aims to create a V2X world in which cars and society as a whole are connected through communications.
For example, in V2P (Vehicle-to-Pedestrian) communication, an in-vehicle image recognition camera detects human movement. Using edge computing technology at a 5G base station, it sends an alert to a pedestrian's smartphone to warn them of an approaching vehicle. This technology is being tested jointly with SoftBank and is expected to be put to practical use in conjunction with the social implementation of 5G.
Honda's role is to provide appropriate information according to each traffic participant's condition and traffic scene.
However, as for the method of providing the information, "standardization through public-private cooperation is necessary.”

In this context, Prime Minister Fumio Kishida held the first Temporary Digital Administrative Investigation Committee on November 16, 2021 at the Prime Minister's official residence. At this meeting, Prime Minister Kishida stated that he would formulate "digital principles" by the end of the year and specify the reform items necessary for the digital transformation (DX) of society.
At the beginning of next year, he would "promptly start systemic reforms for what can be done". And that in the spring of 2022, "compile a comprehensive regulatory review plan to create an economic and social structure appropriate for the digital age.

Discussions on the "linkage" (cooperation) between mobility and society will be in full effect among industry, academia and the government.
When will Honda's vision of "an era in which all transportation participants are connected" be realized in Japan?
Let’s keep a close eye on the future moves of the automakers, as well as the Digital Agency, which is the command center for DX in Japan.