Articles for ITS market ETC Version 2.0 is coming soon. A new service was announced at the Tokyo Motor Show and the possibility that is could be used as a device for older drivers. 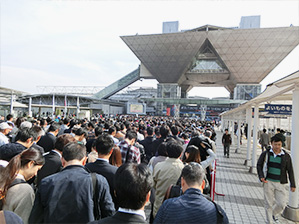 A long line of the people who were waiting for the opening of Tokyo Motor Show on weekday morning, around 10am.

The 44th Tokyo Motor Show (October 30th to November 8th 2015) reached 812 thousand visitors in total and ended with a big success. I thoroughly covered the “Smart Mobility City” at the 2nd floor of West Exhibition Hall. The booths there were mainly about the next generation car such as a driverless car or a fuel-cell car etc, but I paid particular attention to the ETC2.0. 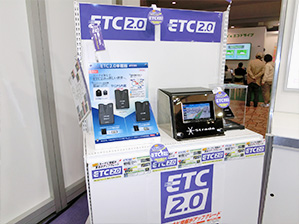 ETC2.0 is the second generation ETC, (Electronic Toll Collecting System). The differences between the first generation and the second generation are that ETC can measure the position as it has GPS function and furthermore, it is fully equipped with many kinds of support systems like Congestion Avoiding System, Safe Driving Support System and Disaster Information System. These support systems have been called “ITS spot” in Japan. ETC2.0 is the fusion of ETC and ITS spot.

My experience before the introduction of “ITS spot”

I would like to introduce my experience of “ITS spot” in order to talk about ETC2.0.

I joined the “ITS spot information session” which was held by Ministry of Land, Infrastructure and Transport for the press in the second half of 2010 and 2011, twice in total. Also I joined the tour and inspected the Traffic Management Department of Metropolitan Expressway Company Limited and then I watched every kind of service on the monitor while riding a bus and running metropolitan expressway. I was introduced to specific examples like a simulation of the reminder of traffic accident at the black spot on metropolitan expressway.

When I joined the tour, the Japanese government said they had started building ITS spot from autumn in 2009 and would complete building 1600 ITS spot at all areas in Japan till March in 2011. However, when I asked a person of Ministry of Land, Infrastructure and Transport in this Tokyo Motor Show, he answered it had not increased more than 1600 spots in expressway.

I also realized that the selling point of ITS spot was that VICS(Vehicle Information and Communication System) could be used across the prefectures. In fact, I viewed that ITS spot drew the optimum route on the monitor based on the analysis of VICS and the latest information from each road transportation company. Furthermore, a person of Ministry of Land, Infrastructure and Transport said they had a plan to increase the functions of ITS spot, for example, wifi would be available in the rest area or the electronic payment would be available in the drive through etc.

Japan has been leading the ITS field for a long time with the achievements of the public infrastructure for ETC and VICS etc, and as the normal evolution, people had a big expectations for ITS spot.

However, the world’s trend definitely was not a tailwind for ITS spot, because Smartphone and Cloud became popular very quickly. Detailed traffic information and navigation have been provided at a very low price or free by the application in smartphones and it involved to the sales of in-vehicle navigation units directly. The trend had changed. Previously, it had been a performance improvement and high price, but especially around the young people, the demand of lower price navigation products increased and also many people started using smartphones on a cradle instead of in-vehicle navigation unit. Automotive equipment manufacturers embedded the ITS spot into their high value and high price navigation units, that is why the smartphone had a very big impact.

Also regarding one of the selling point of ITS spot, the electronic payment, NFC (Near Field Communication) cards which use a short wave 13.56MHz spread very quickly. It is very possible that drivers use NFC cards without getting off the car when they receive a product in the drive through service. Based on these points, it was necessary to verify a future direction of electronic payment by ITS spot. 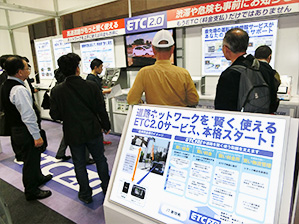 This time, in the brochures of Ministry of Land, Infrastructure and Transport which were distributed in Tokyo Motor Show, there were several new additional expansions in matters of driving support service.

The possibility of the device for older drivers

By the way, I always think ETC2.0 should be very useful for older drivers. The other day, I pointed it out in the live TV show.

On the day before of closing 44th Tokyo Motor Show, from 8:15am to 9:28am on November 7th (Sat). I was on one NHK’s TV program for 45 minutes, and I discussed with other speakers about the topic “How to reduce the traffic accident of older people”.

A 73-years-old man with dementia went out of car control, killed 2 people and injured 4 others. It happened in Miyazaki on October 28th . In recent years, The traffic accidents of older people like driving on the wrong side of the road, hit-and-run etc have been increasing. In the TV program, based on these kinds of cases, I discussed about “How to reduce the traffic accidents of older people” with the guest entertainers and doctors who are studying dementia in the atmosphere of “chat session”.

In this discussion, I mentioned that Utilization of ETC2.0 for the reverse run prevention was being studied”. ETC2.0 currently in the case that the automatic toll collection system emits 5.8GHz frequency signal as per 4 meters width and in case of data transmission in old ITS spot service area, it also emits 5.8GHz frequency signal as per 20 meters width. Based on a person related laboratory of Ministry of Land, Infrastructure and Transport with whom I had an opinion exchange, it is possible to inform reverse run to driver as well as other general driver by emitting different width of 5.8GHz frequency signal when the reverse run happens. However, it cannot remove the possibility that reverse run’s signal interferes other general driver, that is why it needs studying more.

As my opinion, the Japanese government should provide ETC2.0 to over 65 years old drivers by free. I think they should inject tax money into this kind of matter which is directly linked to safety rather than each kind of subsidies that do not have any effectiveness.

Besides, the transmitters supported ETC2.0 are established at 1500 national route spot at all area in Japan and Japanese government is collecting the probe data on condition of anonymity. I think they should discuss the matter what they grasp abnormal driving in advance by opening the anonymity tracking data of over 65 year old drivers with their agreement.

The images of Tokyo Motor Show 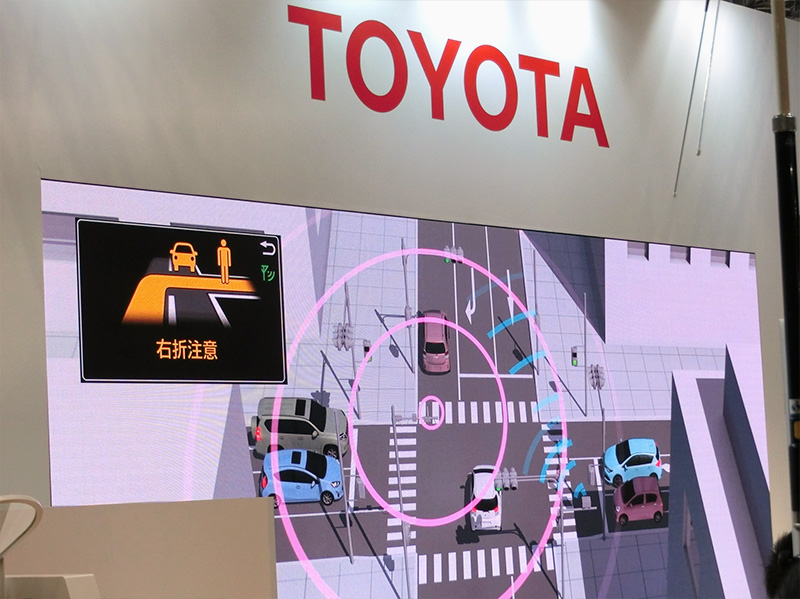 ITS connect announced by TOYOTA 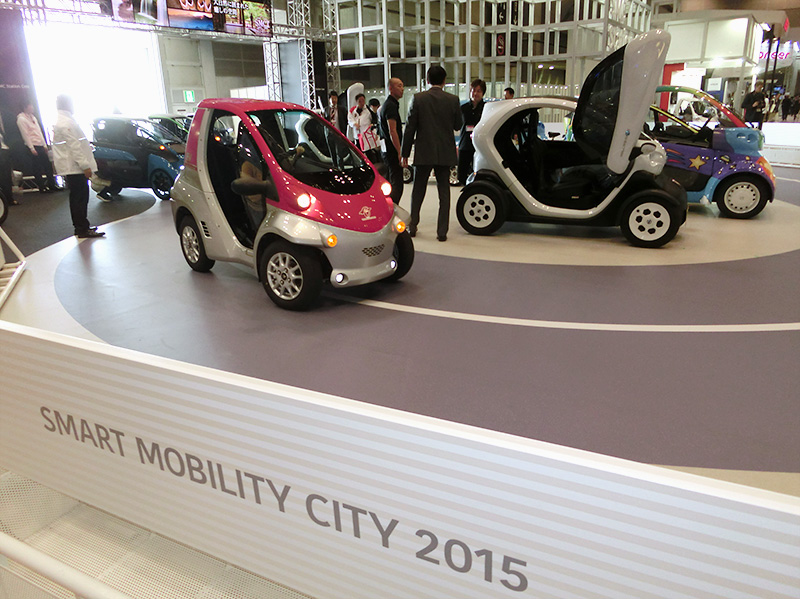 “Smart Mobility City” at the 2nd floor of West Exhibition Hall. As last time, this time also was carried out the demonstration drive of ULV (Ultra Lightweight Vehicle).