Articles for ITS market Fusion of ride sharing and fully automated driving is advancing in the USA. 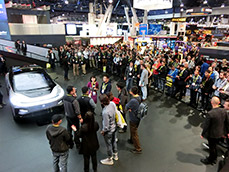 Many parts of the CES Show were very much like a large motor show. The US EV venture, Faraday Future, attracted a large attention. 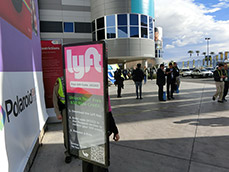 Outside the CES venue, Lift, a ride sharing giant company was advertising.

CES (Consumer Electronics Show), the world's largest show for IT and consumer electronics, was held in Las Vegas, USA in early January this year.
Literally, here is a place where global manufacturers exhibit the latest products related to IT and electric machinery. Among them, the presence of automobiles is increasing recently. One Japanese television news program reported that "There is an atmosphere like a motor show".
From the United States, Ford and FCA (Fiat / Chrysler / Automobiles) participated. Daimler and Volkswagen from Europe, Hyundai and Kia from Korea did as well. From Japan, the largest companies such as Toyota, Nissan and Honda gathered together. In addition, major automobile parts manufacturers, Denso, Hitachi Automotive, American Delphi, France Valeo and others also exhibited.
Automated Driving was the core exhibit of each manufacturer, but the exhibitions focus on the ride sharing was also conspicuous.

The US government is currently proactively promoting legislation for the automated driving.
In September 2016, the Department of Transportation's Road Traffic Safety Administration (NHTSA) announced guidelines on the automated driving. Also, in December of the same year, they announced rules on so-called connected cars such as a communication between “cars and cars" and "cars and infrastructure (road equipment)". Japan and European countries are advancing the consultation for legislation of an automated driving and a connected car in the United Nations, but the United States seems to push through their own way and aim to make it become as the world de facto standard.

Since automated driving is naturally a connected car, these two legal arrangements are deeply involved. Furthermore, collaboration between major IT vendors and some automobile manufacturers are affecting some of the moves behind the US government actions.
In April 2016, Alphabet, a Google's parent company, Ford, Volvo, and ride sharing giant Uber and Lyft established a consortium aiming at lobbying for the spread of ride sharing by automated driving. Ride sharing is called "white taxi” in Japan and the meaning is illegal passenger transportation by individual owned car. In the US, it is a new automobile related business that has grown rapidly since the beginning of the 2010s.

Based on the consortium of the above five companies, Ford announced in August 2016 that Ford will put fully automated driving into practical use by 2021. Volvo, in partnership with Uober, announced that it will begin a demonstration test of fully automatic operation in Volvo's local Sweden from 2017.
Thus, in 2016, the movement of full-scale mass production of automated driving accelerated involving US government and private enterprises and the ride sharing will definitely be involved as well.

Waymo, a Google affiliated company will be joining to fully automated driving business 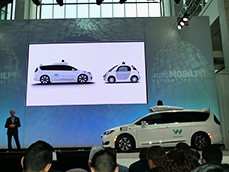 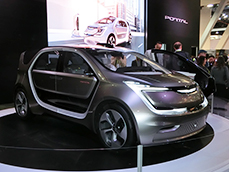 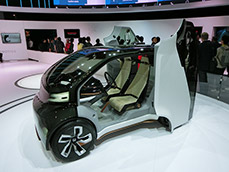 Honda exhibited at CES for the first time in ten years, with the first of their automated driving vehicles with ride sharing

In such a huge trend of the US automated driving business, who is at the center? It is still Google. Why? Firstly, they have Google maps and Google Earth. Secondly, a cloud service that connects directly with Gmail. Thirdly, they have been continuing huge investment to fully automated driving project since 2009. Because of these reasons, Google and its parent company, Alphabet, are in a position to be able to become a bridge between the IT industry and the automobile industry.
The Alphabet’s automated driving division has been separated and independent from Alphabet in December 2016. "Waymo" is the name of this new company.

Alphabet has tested millions of kilometers on public roads by "Google cars" and has accumulated vast amounts of data. In addition, they have independently developed various sensors to use in the automated driving. They will start a business that utilizes the assets of these technologies.
Waymo has already announced a technical alliance with FCA (Fiat-Chrysler Automobile). Using a test vehicle based on Chrysler 's minivan "Pacifica", they have begun demonstration tests in the US from the end of January 2017.
Waymo has also announced that they have been considering a technical alliance with Honda. Honda unveiled the concept automobile "NewV", a fully automated driving vehicle corresponding to ride sharing at the CES Show. It is no doubt that this is an announcement for cooperation with Waymo.
It is the first time for Japanese manufacturers to clarify the development for fusion of ride sharing and fully automated driving.

2020s is time when the automobile industry changes dramatically 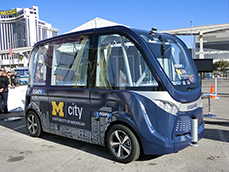 Below is an automatic driving compact bus that collects data at the M City, which is a facility for demonstration experiments that was opened in 2015 and is part of the University of Michigan.

In the beginning of January every year, I have constantly covered the CES in Las Vegas, Nevada, and the North American International Auto Show in Detroit, Michigan (so-called Detroit show) in a row.
In recent years, many of the announcements for the next generation automobile technology that was anticipated five to ten years ahead have been carried out at CES. Meanwhile, the announcement at the Detroit show is the concept model that has been decided to be mass-produced one or two years later.
Especially this year, I strongly felt "Temperature difference to the future of automobile" between CES and Detroit show. For automotive officials who only see the Detroit show, they may be not able to imagine that automated ride sharing is so prevalent in cities throughout the United States in the next five years later, 2022. I believe that the huge trend of next generation automated driving business which is accelerating rapidly in the US will definitely come to Japan with generating critical time lag.