Articles for ITS market Tesla's original connection to Taiwan and the new transportation system technologies. 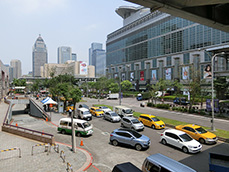 The World’s Trade Center held the EVT Taiwan show. It is next to the famous tower ”Taipei 101”. 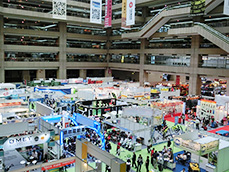 Hall no.1 in the World’s Trade Center. 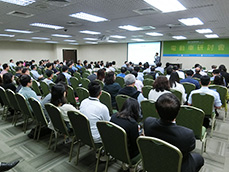 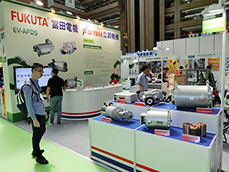 The booth of FUKUTA the Taiwanese company that developed Tesla’s engine.

Taiwan is now gathering the attention of the worldwide economic and political sectors now that the acquisition of SHARP by Hon Hai / Foxconn Technology Group was settled and the Democratic Progressive Party became the ruling party in May 2016. These changes have created new movement in the automotive markets.

In April 2016 I visited Taipei city. There are many kinds of shows during this time of the year. For example, “Taipei International Auto Parts & Accessories Show”, “Motor cycle Taiwan”, “AutoTronics Taipei”, “EV Taiwan” and so on.

The first one to attract my attention was “EV Taiwan”. Taiwan and EV (Electric Vehicle). This partnership is not well known by the Japanese automotive industry or general public but I believe many people would be interested to learn, “Tesla’s technology is originally from Taiwan”

Tesla originally manufactured their EV, “ROADSTER” which was a modified version of the Lotus “Elise”. They partnered with the EV start-up company “AC Propulsion” which provided the EV technology to Tesla in Los Angeles. AC Propulsion had a Taiwanese investor which is a main reason why Tesla purchased the EV related parts from Taiwan.

“First, Tesla directly visited our company with people in Ministry of Economy, Trade and Industry of Taiwan. They have already visited several engine manufacturers before coming to us, but they all refused to work with Tesla because it is very difficult for them to do the mass production of the engine Tesla required. That is why we have accepted it with the belief we would make it. It was actually a very long way to reach the implementation and we invested quite a few amounts of capital by ourselves”

Now, ten years later Tesla is expanding their product line to include the “Model S”, “Model X” and “Model 3”, etc. During this process the engine assembly, inverter and body is moving to California for the “Model S” and others because of their US government duties. Tesla acquired more than three hundred million US dollars in subsidies from United States Department of Energy. This is for the advanced and next generation vehicle development and to complete the corporate acquisition of the joint venture company of TOYOTA and GM. The previous technology gained from Taiwanese companies is now being merged into Tesla as basic EV technology.

Another technology from Taiwan that deeply influenced Tesla is a lithium ion secondary battery pack. The originator of the cylindrical battery called “the battery of computer” as well as “18650” sized 18mm and 65mm is actually AC Propulsion. Tesla was purchasing batteries from several Japanese and Korean companies and one of them was “E-One Moli”, the joint venture company composed by Taiwan and Canada. Currently Tesla is developing a contract with Panasonic as the exclusive supplier. Tesla is planning to open a new factory called “GIGA Factory” which starts operations at the end of 2016 in Nevada.

The “EV” market has not grown as expected even though the Taiwan government has tried to leverage Tesla’s experience to help grow the market. 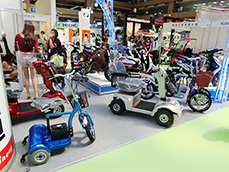 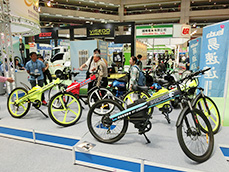 LEV’s being charging at the replaceable charging station. 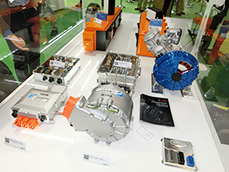 The EV and Range Extender related equipment developed by TARC and a private company.

As mentioned above, Taiwan was the starting point of Tesla’s technology and the government has been working very hard to develop and grow the popularity of the LEV (Light Electric Vehicle) which includes the small electric motorcycle and middle electric vehicles in Taiwan.

TARC (Taiwan Automotive Research Consortium) is the core group for this work. TARC has been tasked to make the new basic technology become a cash cow. This is why many engineers with bachelor, master and doctoral degrees including Western universities graduates are developing the Taiwanese original basic technology. Meanwhile TARC will try to create larger demands in the automotive market for the technology using the national Industrial and Technology Institute and national Automobile Research Institute.

The actual market situation of EV and LEV popularization in 2011 to 2015 is not what the government promoted or described in their plan. There are some reasons.
First the price of the gas is a main issue. Currently Taiwanese do not see the necessity to buy EV products because gas prices remain low and the infrastructure for EV is still small.
The second reason relates to the export of EV products and related parts to China. Exports were very low due to changes in the Chinese EV related policy and the current sluggish economic in China. 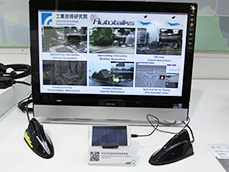 The exhibit for V2X using the DSRC system 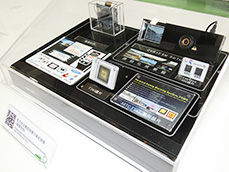 The exhibit for the smartphone application supporting the Collision avoidance system developed by TARC.

As I covered the many shows for EV Taiwan, etc., I found that expectations for the new ruling party is very high among the EV related industries.
The former ruling Nationalist party attitude was to get along with China. People are carefully watching how the Democratic Progressive Party builds their relationship with China. A new president and leader of the Democratic Progressive Party, Ms. Tsai Ing-wen is stressing to grow the economy. There is also a possibility that she will push to innovate the EV and LEV policy including the reconstructing of the bonus plan for the manufacturers and consumers.

Also basic development of the V2X by Taiwan’s original DSRC (Dedicated Short Range Communications) technology is progressing for Taiwan as shown in TARC’s exhibit booth. The standard is IEEE802.11p and is using 5.85～5.925GHz. TARC has been making progress with it lately and features included in the latest model are called OBU 6.0A and 6.0B. This uses the receiver’s format (In 6.0A case the size is 180mm×90mm×70mm and the weight is 0.2kg). It is already being using in the EU testing and TARC would also like to test it fully in Taiwan.

In addition I found the exhibits for smartphone applications that support Lane Departure Prevention and Collision avoidance systems. The proprietary camera TARC developed with a private company are deployed in these systems and designed to acquire the data. TARC will not discuss details of the protocol related to the Image recognition.
Also I think there is a possibility the new ETC system may also be imported to help reduce traffic volume by the toll collection system because heavy traffic jams in Taipei are a big transportation problem. Mitsubishi Heavy Industries Ltd, a Japanese company presented their latest ETC system at the ITS (Intelligent Transport Systems) symposium in March 2016. Currently Mitsubishi Heavy Industries Ltd is providing their ECT system to Malaysia, India, Vietnam and Singapore.

At the EV Taiwan show there was a workshop for people related to the EV industries and universities. They attended a speech by someone from the economics research center of the government. In the speech, one demonstration introduced the Ride share service. The infrastructures for this kind of new transportation system will likely combine the EV and ITS technologies and may show progress under the new ruling party. In Taipei city the full-summer sun was shining which gave me many inspirations.