The second EV bubble is coming in China 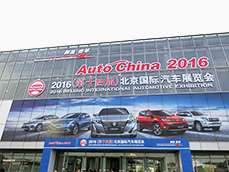 The Auto China was held at the convention center close to airport. 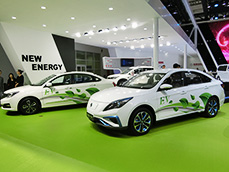 I covered the Auto China (April 29th to May 4th 2016) takes place once every two years in Bei Jing and found lots of EV (Electric Vehicles) were exhibited. This is because the world’s automotive industry is responding to the NEV (New Energy Vehicles) policy that the Chinese government has been promoting. Among them, I found the Chinese domestic manufacturers were very aggressively promoting their EV products.

Concerning the Chinese EV policy, I remember the “Ten city, 1000 project” carried out in late 2000s. It was the policy made by more than a thousand buses and taxies converted to EV in ten large cities. This caused “The first Chinese EV bubble”, especially the lithium ion secondary battery industry to become very hot. This policy was expanding to 25 cities, but in 2013 suddenly it was stopped by government. I asked a journalist who was familiar with Chinese affairs for the reason and he answered “The administration of this policy had many problems because the local governments lacked understanding of the policy”.

However, in autumn of 2014 the Chinese government suddenly announced a new EV policy to promote growth of NEV (New Energy Vehicles) for consumers. The government wants to expand sales promotion premiums and make preparations to legislate the NEV sales requirements for each car manufacturer. Therefore the Chinese government is cooperating with the American government to study a Zero Emission Vehicle (ZEV) Program. It consists of a research team composed of China Automotive Technology & Research Center (CATARC) and University of California, Davis (UCD). CATARC is located in Tianjin at the Chinese national Research Center. UCD is responsible for laboratory research related ZEV Programs for California Air Resource Board (CARB).

On the other hand local Chinese car manufacturers plan on accelerating an earlier start for mass production of a broad product line including Sedan, Coupe and small SUV etc. to compete against Japanese companies. The Beijing show was like a “second EV bubble”.

Chinese “BAT” (Baidu, Alibaba and Tencent) IT companies are infiltrating the automotive industry 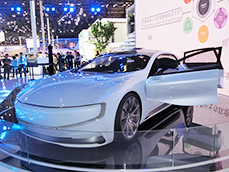 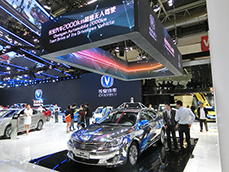 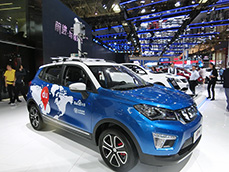 Baidu’s car is being used to gather HD map data. 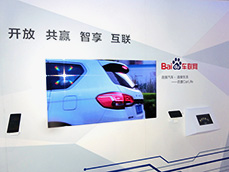 Biadu introduced their application “Car life” which has been adopted by many companies. 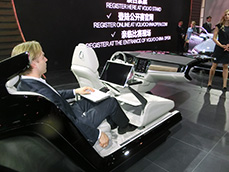 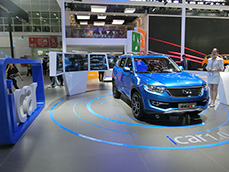 One local Chinese company displaying their “iCar” concept. They stressed “IoV”, not “IoT”. 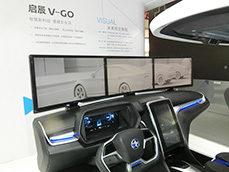 In Auto China, I found there were many booths of autonomous cars trying to synchronize their activities with Japan and western countries. Among them included a start-up company called “LeSEE” located at HongKong which attracted my attention. LeSEE said it is an affiliated company of LeTV which provides TV and internet service and will technically partner with Faraday Future. It is rumored Apple is behind this company but no one knows for sure.

In contrast one local Chinese car manufacturer has been continuing with a very orthodox development for autonomous cars. It is Changan Automobile Co., Ltd. They played a video at Auto China which demonstrated their autonomous car testing. The driverless car drove 2000km to the convention center on the highway. Changan Automobile is cooperating with Baidu, the largest map data service provider in China to create high precision maps required for autonomous cars. They also exhibited a LIDAR/radar laser and camera with video deployed in a small SUV.

Baidu is strongly spreading their influence in the in-vehicle infotainment (information and entertainment) market. They started providing “Car Life”, which is a smartphone application for in-vehicle devices for all car manufacturers. In China, Google has been removed from business markets by Chinese government. This is why Google’s application “Android Auto” is unavailable in China even it is very popular in the US and Europe. The standard applications for automotive market in China are “Car Life” and Apple’s “Car Play”.

At the same time, one large Chinese IT company is also spreading their influence in the automotive market. It is Alibaba, the largest company for online shopping. “T Mall”, the online shopping site provided by Alibaba is providing a special service which is “buying a car online”. They introduce car dealers to customers who want to buy a new car. A HONDA executive who is responsible for the Chinese market, said “30% of customers who buy our car in China are from T Mall. This number can reach 60% in inland China where there are not many car dealers. Furthermore Alibaba is also providing an online payments service called “Alipay” which is also widely accepted in ridesharing market.
“We chat” provided by Tencent is the largest social networking service provider in China. It has also been adopted by many car manufacturers as an in-vehicle application with domestic specifications.
“BAT” includes these three companies, Baidu, Alibaba and Tencent which makes BAT the largest IT companies in China.

It is very certain that BAT will be increasing their presence in the automotive market. Their core consumers in this market are people born in the 1980’s with the car manufacturers and IT companies trying to also strengthened their appeal to “a new value of car” for people born in 1990s.