The diversity of Connected Business

A new connected service was explained to media at the annual technical briefing session at the "Honda Meeting (July 3, 2019: Wako City, Saitama Prefecture)" hosted by Honda.
This is highlighted as a move towards a new service business that goes beyond the concept of connected cars that has currently been discussed in the automotive industry.

To clarify the word connected car includes various meanings. In general, it means connecting the in-vehicle system of the car to communication equipment and communication infrastructure via electrical signals using Wi-Fi, Bluetooth, or cellular telephone line.
Among them there is a link between smartphones and in-vehicle systems that Apple and Google (part of Alphabet) have advocated since around 2014. Apple promoted CarPlay and Google promoted Android Auto. This is referred to as infotainment as it relates to in-vehicle entertainment such as playback of audio / image content such as music, movies and television programs, SNS (social network service), etc. as they associate with information.
In infotainment, the battle for supremacy in the in-vehicle device operating system is intensifying and the percentage of Android OS by Google (part of Alphabet) has been expanding in recent years.
Among the Japanese manufacturers, Honda was the first to promote CarPlay, Android Auto and the transition to Android OS of car-mounted devices.

Alternately connected cars also have a big influence on automated driving. The term "connected" in this case refers to the conversion of vehicle location and travel information into “big data” through an external infrastructure. The aim is to improve the stability and safety of automated vehicle operation or Advanced Driver Assistance System (ADAS) through the next generation of high-precision three-dimensional maps, weather conditions and accident information. Communication between vehicles is called V2V, and communication with the road side infrastructure is called V2I, focusing on vehicles(V). V2X (V to X) is a more generic term for these.
Honda announced that it will commercialize Level 3 automated driving when traffic jams occur on Japanese highways in 2020. At level 3, the main control of automated driving shifts from the driver to the car system. Therefore until the driver is notified of "transition of driving" from the system of the car, "second tasks" such as reading in the car and use of a smartphone is permitted. V2X makes it possible to keep track of the driving mode situation.
In addition to the infotainment and V2X a new connected service "eMaaS" was announced at this Honda meeting. 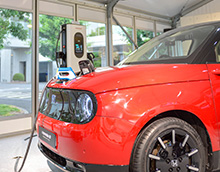 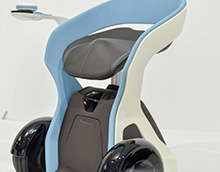 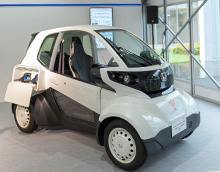 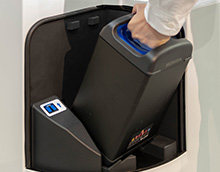 eMaaS's “e” stands for energy service, and MaaS stands for mobility as a service.
he word MaaS has become popular in public transport in recent years. The concept is that open data will be created by sharing travel data such as trains, buses and taxis with an API (application programming interface) and a new business strategy including venture companies will be constructed. Collaboration between the government and private companies has been in full swing in Scandinavia, Germany, etc. since 2016-2017 and social implementation is progressing.
On the other hand, MaaS, which Honda defines in eMaaS, is characterized by its limitation as an electric vehicle produced by Honda. Honda has positioned the MaaS as a fuel cell vehicle, ultra-small mobility, and small robots for medical and nursing care, with the EV "HONDA e" scheduled to be released in Japan from this fall. For batteries it uses removable and portable MPPs (mobile power packs) for ultra-small mobility and small robots. Already Suzuki and Yamaha Motor have agreed on the standardization of batteries for electric mobility based on MPP.
On the other hand, the EaaS (Energy-as-a-Service) concept is used to define the mechanism of electricity distribution based on renewable energy.
And it is eMaaS that united EaaS and MaaS. By connecting electric mobility and energy services, Honda aims to "make life enjoyable and convenient and free of stress".

Can they go beyond smart grids? 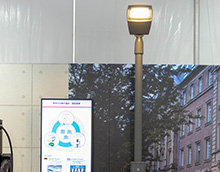 According to the chart presented by Honda it shows eMaaS as a technical platform. In eMaaS the usage status including the running status from the electric mobility vehicle and the remaining battery capacity are collected. They will analyze it into “big data” and make a business that includes vehicle charging, charging infrastructure, power grid operators and power generators or power retailer solutions for a win-win.
I recall something similar to this model somewhere.
It's a "smart grid". When mass production of Nissan LEAF and Mitsubishi i-MiEV started around 2010, there was a movement to regard EV as a simple stationary battery and to integrate with the power network. Smart grid was a business area where major electric power companies such as Tokyo Electric Power, major gas companies such as Osaka Gas, and heavy electric power manufacturers such as Mitsubishi Heavy Industries entered the market.
However, after the Great East Japan Earthquake of March 11, 2011 nuclear power plants were expected to stop operation and not resume operation one after another. This caused Japan's electricity demand to rapidly increase the share of thermal power generation by liquefied natural gas (LNG). Also the debate over the use of renewable energy derived from solar and wind power has suddenly cooled. Among them there is a suggestion that the smart grid structure is also on hold.

This time however eMaaS, advocated by Honda is not a smart grid remake.
Instead it is backed by a business model that introduces the latest connected technology and enables early social implementation. In the Philippines and Indonesia the movement toward eMaaS realization is accelerating, with demonstration tests using Mobile Power Pack (MPP) already beginning.
In the future if there is an opportunity, I would like to report from the site of Honda’s eMaaS Social Demonstration.