”Using a smartphone while driving”, severe punishment and driver awareness

HMI is short for Human Machine Interface.
HMI in the automotive field often refers to the screen in the vehicle. In other words, emphasis is placed on human-car vision interfaces.
Under these circumstances issues that require fundamental discussions about ideal forms of HMI have emerged.

However, when observing driving situations in the city after the law was amended we still see many people driving while using smartphones. In many cases they seem to be using social networking services such as LINE, Facebook, Twitter, email and games.
These situations are not only observed in Japan, but all over the world. There seems to be a very low individual awareness that they are doing dangerous acts that are punishable by law. 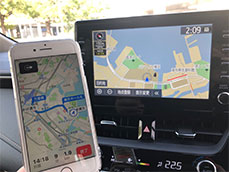 What do smartphone planners and manufacturers think about control by “using a smartphone while driving”?

Technically, Apple's CarPlay and Google's Android Auto which link the in-vehicle device and smartphone were mass-produced around 2015. The number of vehicles equipped with these technologies in North America has gradually been expanding. Along with this, “using a smartphone while driving” is on the decline, especially among younger generations. However, for cars manufactured before 2015 that support CarPlay and Android Auto, the "using a smartphone while driving" situations are routinely still the same and performed by all generations.

However, automakers including Toyota's DCM (Data Communication Module), have begun to mass-produce connectivity technology R & D by circumventing car navigation manufacturers. Following Mazda Connect of Mazda, Toyota also introduced a display audio in the Corolla released in September 2019 with a common HMI. It is certain that this will be expanded to all Toyota models in the future.

With the business policies of automakers and car navigation manufacturers not being unified, the younger generation seems to feel that smartphones are easier to handle. After all, smartphones are more natural for them as an HMI. 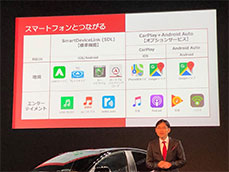 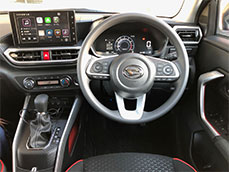 Daihatsu new Rocky’s interior
As with Toyota, it uses display audio.
HMI is likely to change dramatically in small cars in the future.

Discussion is needed between "using smartphone" and "automated driving" when considering human intervention.

"Using a smartphone while driving" is strictly prohibited, after revising the Road Traffic Law. However "using a smartphone while driving" is allowed under the same road traffic law for automated driving cars at level 3 and above.
There are five levels of automated driving, 1 to 5. In levels 1 and 2, driving is mainly performed by humans. In levels 3 to 5 the vehicle is the main driver.
At level 3 when the system determines that automated driving cannot be continued, such as in an emergency the system issues a TOR (Take Over Request) to the driver through voice, display, vibration, etc.
Until a TOR occurs the driver can perform actions other than driving without gazing forward, while maintaining a posture capable of returning to driving. This is called a secondary activity.

Secondary activities allow for eating and drinking, reading, and even smartphone operation. Therefore "driving while using a smartphone" is acceptable.
I've talked with carmakers and government agencies in various discussions about the challenges of introducing level 3 automated driving into society. In fact, I have driven on public roads with several level 3 automated driving test vehicles.
Based on such experience I believe that mass production of level 3 vehicles is extremely difficult from the perspective of social acceptability.

In mid-December 2019 there were reports that Honda will mass-produce level 3 automated vehicles for highway traffic congestion by the summer of 2020. “The wealthy people who can buy Level 3 self-driving cars can use smartphones "It is unfair to say that ordinary people who continue to drive older cars like us are not allowed to use smartphones.” These are some comments I sometimes see on the internet.

I agree with these opinions.
The relationship between “people and society” may change significantly due to automated driving and connectivity through communication. That is why it is necessary to discuss technology and law where people are prioritized, not technology.
I think society as a whole needs to think more deeply about the mismatch in HMI thinking between "using a smartphone while driving " and "level 3 automated driving".