Elderly driver accidents are not following the decreasing trend in Japan

Traffic accidents by elderly drivers are not reducing at the overall national rate. Many cases have occurred including driving the wrong way on highways, driving on sidewalks during heavy traffic periods, and speeding in convenience store parking lots. Drivers are not only in their 70’s and 80’s, but also 60’s, which means many elderly drivers are still causing serious traffic violations and accidents.

In response to these incidents and various accident types, televisions, newspapers and internet sites have been covering and reporting these as an "elderly driver problem" Looking from strictly a social economic situation, many people think that traffic accidents have increased recently. However traffic accidents have continued to decline in recent years. According to the announcement by the National Police Agency, the peak of traffic accident numbers were 952,720 in 2004. In 2016 the accident numbers have drastically decreased to 499,232 or by nearly half.

Along with this, the number of deaths due to traffic accidents has also decreased. In 2016 there were 3,904 deaths, which is about a quarter of the peak 16,765 deaths in 1970. Meanwhile accidents involving deaths of individuals 75 years old and over have remained almost flat for the past 15 years. Therefore even though overall accident numbers continue decreasing, accidents involving elderly drivers remain about the same.

Also looking at the Japanese population pyramid, the tendency toward a declining birth rate and an aging population is very clear. It is certain that the aging rate will continue to rise in the future, indicating an increasing proportion of people over the age of 65 in the total population.
By 2015 there were about 82 million people with a driver’s license. Among them 4.78 million people are over 75 years old, which are 5.8% of the total population. This figure will definitely continue rising in the future. Japan is facing an aging population society which continues to fuel the serious elderly driver problem in Japan.

“Reverse direction accidents” are getting worse in Japan 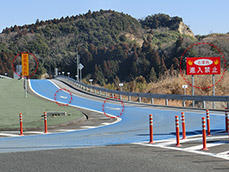 Signboards and road markings for reverse direction prevention on the expressway 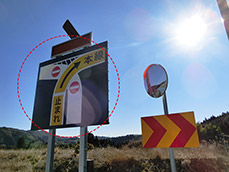 A signboard to prevent reverse direction driving at the approach road of the highway. 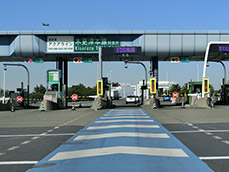 Among the accidents of older drivers, the most serious one is the “reverse direction accident”. This kind of abnormal accident occurs frequently. The Japan Automobile Federation (JAF) has released videos which were recorded by cameras deployed in the accident cars showing various accident scenarios.
In Japan the police are cracking down on traffic violations either on the scene or by using witness reports of reverse direction violations. The police use these reports to identify the vehicle at a later date and question the drivers for information. However in addition to these cases, reverse direction driving by elderly drivers continues to occur in many places, making it difficult to grasp the full range of violations.

In response to these statistics the Japanese government has begun to set up various indicators at interchanges and junctions on expressways including large arrow signs that shine strongly when hit by the headlights or large arrows on the road surface in order to clarify roadway direction. In addition rubber poles are added in the merging area to clearly indicate road direction.

Technological development related to reverse direction driving has also been advanced. From November 2016 to February 2017 the Japanese government offered a public recruitment for technology that reduces reverse direction driving on expressways. The demonstration test will be held for about one year, starting from April 2017.
Contents of public offerings are roughly divided into the following three areas.

The first area is "detection". It is a technology to discover the reverse direction driving by using road side infrastructures and aggregating the information at the control center. Specifically a traffic counter is used to understand traffic jam situations.

The last area is 'guidance'. This is to detect the reverse direction driving with an in-vehicle camera such as a drive recorder, collect the information from the in-vehicle device and guide the driver in the appropriate direction using the car navigation screen.

Regarding measures preventing the reverse direction driving on expressways. It is easier to respond to accidents of elderly drivers compared to general roadways as expressways are areas managed by road operators. Meanwhile on general roads emphasis is placed on preventing accidents by onboard equipment. Among them are increased functions deployed in vehicles during recent years including automated braking. This is a collision damage, brake mitigation device for preventing accelerator and braking mistakes.

The number of new cars with installed automated braking exceeded 1.9 million. This accounts for 43.2% of the passenger car production.
Currently these systems are intended for objects and vehicles, therefore the recognition rate of pedestrians is not very high. JNCAP an automobile assessment organization has already decided to add an evaluation test for pedestrian protection. Among the new models launched from the latter half of 2016 to 2017, there is one equipped with an automated braking function for detecting pedestrians.

About 1.4 million units, which account for 31.6% of the new sales of passenger cars in 2015 include the function to prevent mistakes in accelerator depressing and braking.
Technologies using cameras and ultrasonic sensors are also used for these accident countermeasures. These technologies are proprietary to each automobile manufacture and therefore information is not shared.

In addition the Ministry of Land, Infrastructure and Transport of Japan asked Suzuki, Daihatsu, Honda and Mitsubishi Motors to manufacture minicars in December 2016. They are requesting safety ideas on equipment that can be retrofitted to existing vehicles, such as automated braking and other features. The first report will be due in February 2017.
In addition to this it is expected that automated driving and other features will be effective countermeasures against elderly driver accidents. I will research and present more information on this subject in a future article.