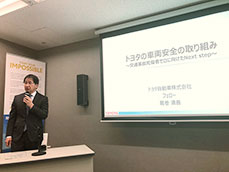 In early February 2020, the Public Relations Department of the Toyota Head Office sent an e-mail saying, "I'm in a hurry, but could you attend a press release on ADAS?"
ADAS (Advanced Driver Assistance System). Generally, it refers to a preventive safety device that uses in-vehicle sensors such as cameras and radar. Which controls a collision damage mitigation brake called an automatic brake.
In recent years it has been designed to deal with elderly drivers, who have experienced a series of serious accidents.

Seigo Kuzumaki, a fellow at Toyota's Advanced Technology Company, which conducts research and development on ADAS and automated driving, explained in detail.
At the beginning of the explanation, various graphs and data were presented regarding the social issues and background that led to this announcement.
The biggest reason for the increase in elderly driver accidents relates to the increasing number of elderly drivers. According to the National Police Agency, when compared 2007 to 2018, the number of licensed driver groups aged 75, 80 and over almost doubled.

As an additional note, the rapid aging of licensed drivers was attributed to the continued spread of private cars in Japan during the high economic growth periods of the 1960s and 1970s. Currently in 2020, 1970 was 50 years ago and those in their 20’s are now aged in their 70’s.
In terms of gender it is about a 10 to 20-year delay for women to get a driver's license in Japan than for men. Therefore, in the 2020’, the number of elderly female drivers will increase and it is certain that the total number of elderly drivers will also increase.
Given this social situation, Toyota has taken measures. 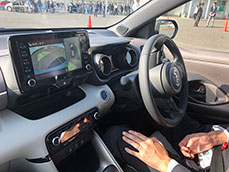 Toyota's ADAS is called “Toyota Safety Sense”. The technology is upgraded once every few years, and most recently in 2018 The accuracy of in-vehicle cameras and millimeter-wave radar has been increased to protect pedestrians at night.

Toyota Safety Sense, starting in 2020 will mass-produce a system that detects an oncoming vehicle going straight and sounds a buzzer inside the vehicle when turning into its path at an intersection. It will be installed on the new Yaris (formerly Vitz) released in February 2020 and will be used on other models as needed. In the near future, Toyota Safety Sense will be equipped with a collision avoidance function with automated steering that is mass-produced with the Lexus Safety System + A.

In addition, Advanced Park which provides parking assistance will be mass-produced with increased accuracy. The on-board camera and infrared sensor, senses 360 degrees around the vehicle and controls the steering, accelerator, and brakes to shorten the time required for parking. In addition, the operation has been renewed with an emphasis on easy-to-understand operation and the content displayed on the in-car monitor has been revised. I participated in a prototype test drive of a new Yaris in Chiba Prefecture in December 2019 and experienced the new advanced parking with an actual car. 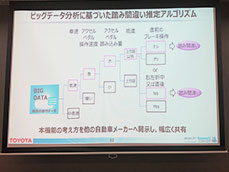 Illustration of the acceleration suppression algorithm newly developed by Toyota

Accelerator and brake confusion often occurs with elderly drivers. In the past Toyota Safety Sense used a camera and millimeter-wave radar to control the engine speed so that it would not increase even if the accelerator was suddenly depressed when there was an obstacle ahead.
In other words, the vehicle only responded when it was stopped.

However, when Toyota analyzed actual accident cases it was found that there were many cases where the driver accidentally depressed the accelerator and brake while driving.
There is a significant technical hurdle for automakers to intentionally create a situation in which the car does not accelerate when the accelerator is depressed while driving.
On top of that, Toyota has developed a unique algorithm based on the driving data collected from the Data Communication Module (DCM) that transmits the in-vehicle data to the cloud (big data) already installed on each model.

According to this algorithm for example, when the vehicle turns at an intersection with oncoming traffic, it senses an unnaturally sudden accelerator operation is performed and controls the engine speed so that it does not increase. The technical details will be disclosed free of charge to other automakers to promote integration into their systems.
Toyota will use the acceleration suppression function during sudden acceleration attempts in all models to be released after summer 2020. In addition, functions will be added to the optional accelerator and brake confusion prevention device that is sold as a dealer option.
To use, an optional setting key is provided to distinguish it from the normal Toyota Safety Sense mode.
Pricing has not currently been disclosed.