This was the largest GTC (GPU Technology Conference) ever 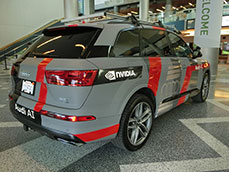 A vehicle in which AUDI and NVIDIA collaborated on autonomous driving and AI.

NVIDIA, the leading GPU (Graphics Processing Unit) giant, held the GTC. An annual, 4 day meeting held in the United States for developers at the convention center in San Jose from May 8 to 11, 2017. GPU is a computing device grown in the game world by exhibiting excellent performance in image processing. In recent years it has grown in popularity for autonomous driving vehicles.

NVIDIA has been engaging in successful marketing activities. This includes a technology exhibition in cooperation with AUDI Germany at the CES (Consumer Electronics Show). CES is the world's largest trade fair in IT and home technologies held in Las Vegas since the early 2010s.
In the meantime, the participants of GTC, held independently by NVIDIA also increased year after year. Currently the number of visitors has reached approximately 8000 people. What has become a strong wind for NVIDIA is AI (artificial intelligence), which has been mass-produced in various industries in recent years. 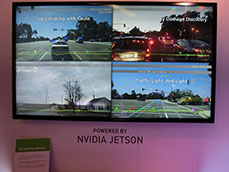 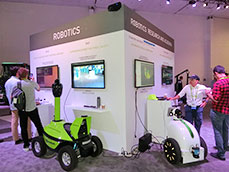 A lot of cases for using NVIDIA's AI technology were introduced in the exhibition hall at GTC. NVIDIA is researching and developing original deep learning algorithms, and it is accelerating development for practical use applications in these different industries.

Robotics first came to my mind. The AI “Jetson “ platform is mounted in mobility across land, sea and air systems including medical care service robots, seabed exploration robots, and drones developed by Stanford University and many other startup companies.
In addition to this the main attraction for visitors was the analysis flow of people and logistics in urban development. Also the function of police cars to recognize owner data automatically by reading all surrounding vehicle license plates while driving. Other functions included agricultural equipment systems that analyze the growth condition of crops by converting underground conditions into usable data.
Jetson is a platform for incorporation many NVIDIA parts with the GPU. It has external input terminals such as USB, and captures data obtained using millimeter wave radar, ultrasonic sensor, or laser radar (also-called “rider”). Surprisingly the Jetson's latest version, TX including Software Development Kit has a low price of 599 dollars.
Also, Jetson buyers naturally have more opportunities to exchange information with NVIDIA engineers so that they can realize the latest trends of AI. For Japanese companies, Toyota has adopted Jetson as a medical care robot. 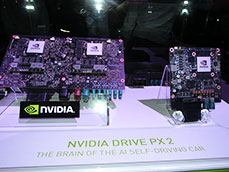 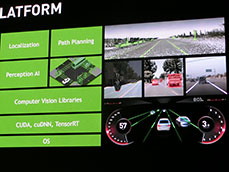 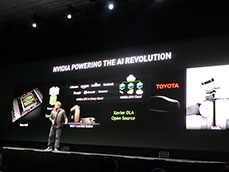 A keynote speech by Jenson Fan, CEO of NVIDIA. He announced the Toyota partnership.

NVIDIA gained technical feedback from various industries as a result of introducing Jetson in the market. They are now developing for the autonomous driving industry.
As described above, NVIDIA has been collaborating with AUDI for autonomous driving. OAA (Open Automotive Alliance) which standardizes Android of OS (Operating System) was recommended by Google (Alphabet) and with IVI (In Vehicle Infotainment) was announced at CES 2014. The exclusive partnership with the technical department of AUDI got a small board developed by NVIDIA. AUDI said "The most important feature concerning automatic driving is AI. For our implementation, we have been researching and developing for many years. We have mounted complicated wiring and large processors in the trunk area before. However we finally now have a small unit that can be held in one hand." At the press conference, Mr. Jenson Fan, founder and CEO of NVIDIA, was present.

The original board was announced as "DRIVE PX" in 2015 and has evolved into "DRIVE PX 2" for the 2016 mass production model.
Originally it was sold to AUDI, VOLVO, etc. but since 2017 it has been rapidly expanding to automobile and automotive part manufacturers around the world. In 2018, it is forecasted to reach nearly 200 companies in total.

The U.S. IT industry enters into the automobile business and the supply chain collapses

Regarding strengthening of business cooperation between Toyota and NVIDIA, I hear many opinions from the automobile industry saying "I am surprised because it is an unexpected thing". For Toyota's autonomous driving system, DENSO (Toyota's subsidiary) and Renesas Electronics the largest automotive microprocessor company have been regarded as Toyota’s most important technical partner.

Also, in recent years Toyota has decided to purchase parts from Continental for ADAS (Advanced Driver Assistance Systems) like the automatic brake, etc. On the other hand NVIDIA is also promoting collaboration with Continental's competitor, Bosch, Germany. In addition to NVIDIA, Intel, the largest CPU for PC has also been strengthening their position to become the de facto standard in the autonomous driving business.