Articles for ITS market Do the automated driving systems need the GNSS (Global Navigation Satellite System) ? 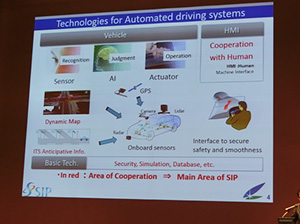 The international conference regarding SIP (Strategy, innovation and creation program) of the cabinet office. The image is emphasizing the importance of GPS.

On November 27th 2015, the Japanese Ministry of Land, Infrastructure, Transport and Tourism announced “Eliminate the traffic accidents of Wrong-way driving on the expressway until 2020. The program is for safer expressways by connecting the cars and the road”. This announcement, at the press conference, Keichi Ishii, the minister of Land, Infrastructure and Transportation, said to consider the practical use of ETC2.0 and the automatic brake systems of the automated driving system.

In this way, the automated driving system has received a lot of attention as one of the ways to solve the social issues related the automobile.

As for the automated driving system, each automobile manufacturer in Japan, United States, Europe, Korea and China are researching and developing it by collaboration between industry, academia and government.

In Japan, TOYOTA, NISSAN and HONDA have started driving tests on a public roads. As for the government programs, there are two kinds of base programs, one is “SIP“ (Strategy, innovation and creation program) where the cabinet office cooperates with relevant ministries and the other program is “The special zone of the technology demonstration in the near future” which the cabinet office takes the lead. These two programs have the proposition that hope to produce results by 2020, the Tokyo Olympic Games.

The competitive area and the cooperative area

The Road Transport Bureau of the Ministry of Land, Infrastructure, Transport and Tourism and the Manufacturing Industries Bureau of the Ministry of Economy, Trade and Industry are trying to cooperate with the automobile manufacturers from the standpoint of “Consider the driverless cars as an Industry” as well as joining the SIP.
Among them, the core topic is the idea of “The competitive area and the cooperative area”.
The competitive area means the technological innovation of the sensors which are equipped in vehicles like cameras, lasers, laser radar systems etc and also means a business model of using data with connecting the smartphone and the in-vehicle devices.

On the other hand, the cooperative area refers to the field related the infrastructure. In the Vehicle-to-Infrastructure (V2I) and Vehicle-to-vehicle (V2V) fields, the improvement of the communication equipment which supports Dedicated Short Range Communications (DSRC) like ETC2.0 and 760MHz spectrum.
Besides the “the infrastructure what we can see”, the infrastructure that we need on the driverless cars is the digital infrastructure i.e. the map information. SIP calls it “The dynamic map”. It is the system which analyzes “the travel data per second” of the moving vehicles as the probe information by cloud based on the map which was composed by measuring high accuracy 3D map. “The dynamic map” is the very cooperative area and the automobile manufacturers should provide their own company information under “the certain conditions”. The problem is the phrase “the certain conditions”, but as for the details I will cover more about it and introduce it in another time.

One more very important factor in the cooperative area is GNSS.
GNSS is Global Navigation Satellite System. In 1990, the data of U.S. Satellite System ”GPS” was opened to the public and mostly using in the car navigation, it became very popular in the world. In recent years, for the reason of the security and increasing the importance of the Internet of Things (IoT), research and development is improving at many places like Russia/GLONASS, EU/Galileo, China/BeiDou, India/IRNSS and Japan/QZSS.

The automated driving without GNSS

At the beginning of November 2015, when I joined the Nissan’s driving test of driverless car, a person in charge of development said “we think the GPS is not important”. Their driverless cars calculate the “General current location” by using very normal GPS and collate with “the traffic lane information on the map” which was inserted into in-vehicle data in advance and also they confirm the surrounding views by the Image Recognition through their car cameras, that is why they can catch the current location in real time. He said ”As you know, it costs more if we need to increase the accuracy. Besides, GPS cannot be used in a tunnel in the first place”.

Actually, such a voice is not heard only from Nissan. Most engineers of the automated driving system of the automobile manufacturers in Japan, United States, Europe, Korea and China which I have covered point this it out.
Currently, the accuracy of the GNSS which is embedded in the car navigation system is “meter class”. Each automobile manufacturer is trying to use it into the automated driving system through the Image Recognition or DSRC. 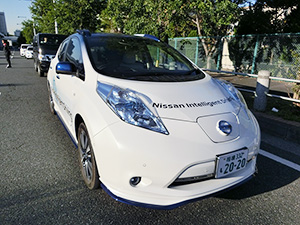 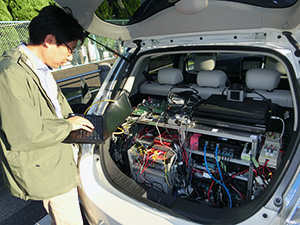 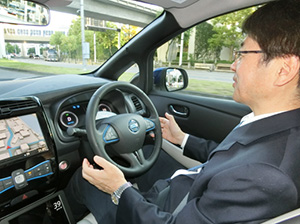 The inside of Nissan’s driverless test car. It is running on the local roads in Tokyo. 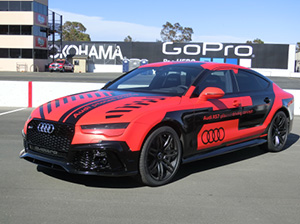 Audi’s driverless car for racing at the Sonoma Raceway, California, US on July, 2015. 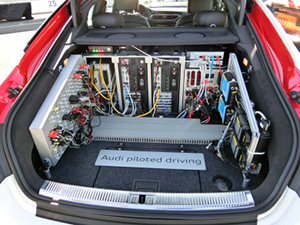 Just to change the subject, this is the Sonoma Raceway, California, US where is the 2.52-mile (4.06 km) road course circuit located at the famous wine producing area, Napa Valley, the suburbs of California.
On July 2015, there was an Audi’s test-riding event of a driverless car and I joined it.
To my surprise, the velocity reached 230 km/h on the straight track and also reached 160 km/h on the S-curve track. Audi had held the open driving test at Hockenheimring where hosts the German Grand Prix on September 2014 but as for the test-riding event which they rode with journalists, the Sonoma Raceway’s one was the first time for them. Incidentally, one of Audi’s young engineers sat on the driver’s seat as “the driving supervisor” but he did not touch the steering, accelerator, brake and shift lever etc., at all while in the automated driving system mode.

This driverless car runs with a system which needs GPS.
The first operation is making a survey of the course by RTK GPS（Real Time Kinematic GPS）After setting the base station in the course, drive 2 laps in total along the right end and the left end by a slow pace around 50 km/h and hereby “the centimeter-class” accuracy map is created. The Sonoma Raceway’s course was laid out on the hill country, that is why it has a large height difference. Generally speaking, the GPS accuracy of vertical direction is about three times better than the horizontal direction, a general “the meter-class” accuracy GPS is imperfect as drive data for the Sonoma Raceway.

That is how the 3D map was created and the Audi’s driverless car drove on it. To my surprise, the car did not equip any sensors as the camera or the millimeter-wave radar which directly watches the outside environment. That is to say, “the sensor which perceives the motion of a car” catches the road surface condition and the running state in real time on the 3D map. Besides, the car analyzes “the motion of 1 or 1.5 seconds ahead” by the artificial intelligence developed by collaborative research with Stanford University without any sensors which watch the outside environment directly like cameras etc and provides the data to the main computer as feedback from the artificial intelligence.
That is why the GNSS including GPS are very useful in case seeking “the best performance under the limited conditions” like driving the circuit by a driverless car.

In Japan, the Geospatial Information Authority of Japan set the “GPS-based Control Station” at 1300 locations in the whole country. The purpose is for earthquake prevention and the analysis of topographical changes after the earthquakes and simultaneously it has a role to build a network to share “the real-time GPS data” by RTK GPS.
Currently in Japan, the most popular driverless car is “not to lean on GNSS”. I hope each automobile manufacturer will develop the driverless car that uses the GNSS including efficient utilization of GPS-based Control Station as well as the four QZSS after 2018.