The Future of Automated Driving

The Ministry of Economy, Trade, and Industry (METI) launched the "Automated Driving Business Study Group" in February 2015 to discuss the realization of automated driving through collaboration between industry, academia, and government.

As of April 2022, the latest data presented by the "Automated Driving Business Study Group" is the draft report version 6.0, published on March 25 of the same year.
One of the most interesting figures is the chart "Toward the realization of the desired future vision" for owner-operated cars (private cars).
On the horizontal axis, the year 2022 is used as the base year, followed by the year 2025, and then the year 2030 and beyond.
The vertical axis is a distribution of the introduction area, with owner-operated vehicles in the wide area. And service vehicles (commercial vehicles such as trucks, buses, and cabs, as well as public transportation) in the narrow area.

Regarding owner-operated cars, they stated that Level 1-2 automated driving will be in widespread use by 2022, and that the introduction of Level 2 and Level 3 cars will be promoted by 2025.
Level 1 is a form of driving assistance that follows the car in front in the same lane. Level 2 includes advanced assistance with automatic lane changes.
At Level 3 and above, the idea is that the driving system is integrated into the car's system. Discussions have been underway at the United Nations regarding the balance between legal interpretation and actual products. Among Japanese manufacturers, Honda is producing the world's first Level 3 passenger car on a limited basis since 2021.

Now, it is noteworthy in the chart that even after 2030, automated owner-car operation will remain at Level 2-3, with the aim of further spreading its use.
They have stated that it will continue the framework of ADAS (Advanced Driver Assistance Systems) for Levels 2 to 3. In other words, there is no rush to raise the entire automobile industry from ADAS Level 2 to Level 3, which has stronger implications for automated driving.
On the other hand, as for service cars, we have determined that Level 4 service cars have already been introduced as of 2022. Moreover, the plan is to promote the introduction of Level 4 service cars at 40 locations in Japan by 2025, and to achieve full-scale diffusion of Level 4 service cars from 2030 onward.

In this evolution of owner and service cars, the two will work together on various requirements.
Specifically, maps, communication infrastructure, ergonomics, cyber security, and safety assessment will be incorporated into products and services as cooperative areas for service vehicles and shared with owner cars.
The idea is to reduce the cost-of-service cars by mass-producing hardware and software, such as sensors and cameras, for both owner cars and service cars.

Looking at this chart again, we can see the results of the government's all-Japan approach to discussing the technology, laws, international cooperation, human resource development, and other aspects of automated driving since the mid-2010s.
These charts on the future of automated driving have been presented as a public-private ITS roadmap.
ITS stands for Intelligent Transport Systems.

In the public-private ITS roadmap, the vertical axis is the level of automated operation, and the horizontal axis is the conditions of use of automated operation (Operational Design Domain).
In this conception, the goal was Level 5 fully automated driving, and the owner car and service car would work together to achieve that goal.
In the 2020s, when automated driving and ADAS will be in full use, the roadmap has changed to a "realistic" roadmap. It is more in line with social reality, rather than one that is more academic or technological from the manufacturers' perspective. Or based on the various automated driving demonstration tests that have been conducted in various parts of Japan and feedback from users and dealers in conjunction with the mass production of ADAS.
Furthermore, the new form of the public-private ITS roadmap is being discussed in the Digital Agency's "Study Group on the Digital Transportation Society," of which I (the author) am a member and which will be implemented in April 2022. 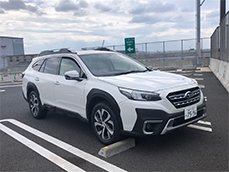 Subaru "OUTBACK". At a parking lot on an expressway in the Kanto region. Photo by the author. 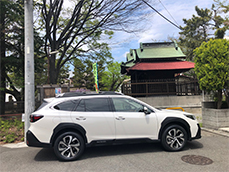 Subaru “OUTBACK” At a public road. Photo by the author. 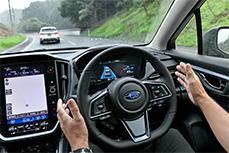 EyeSight X being tested on a test course. The vehicle is “LEVORG”. Source: Subaru.

For the time being, advanced level 2 maturity for owner cars

As the draft version 6 of the report of the Automated Driving Business Study Group indicates, owner-operated cars are likely to be mainly automated level 2 for the time being.
As a basis for such a future vision, we experienced again the Subaru "EyeSight X," latest Level 2 compatible system.
EyeSight X enhances ADAS functions by combining location information from GPS and the Quasi-Zenith Satellite "MICHIBIKI" with three-dimensional high-precision map data. Along with lane-by-lane road information on automobile-only roads that meet certain conditions.

The test vehicle is the Outback, which Subaru launched in October 2021. All models are equipped with EyeSight X as standard equipment.
The test drive was conducted over four days in the Kanto area, mainly in Tokyo, and covered about 400 km on highways and ordinary roads.
To activate EyeSight X, first turn on regular EyeSight on a travelable road. Then, when the dashboard indicates that EyeSight X can be activated depending on the acquisition status of three-dimensional map data and satellite positioning information, the driver turns on the EyeSight X activation button.

EyeSight X, for example, allows the driver to take his/her hands off the steering wheel when certain conditions are met between 0 km/h and 50 km/h in a traffic jam. When the car in front of you in a traffic jam comes to a complete stop, you also stop, when the car in front of you starts to move, the EyeSight X will automatically start up as well.
As for my impression of using both regular EyeSight and EyeSight X in traffic, I have to admit that I am not comfortable with taking my hands off the steering wheel completely. But I found the automatic start from a stop to be very effective.
Active Lane Assist is a so-called "lane change" function. When the driver operates the turn signal at a speed of approximately 70 to 120 km/h, the system judges the surrounding conditions and automatically changes lanes. I found this function convenient and reassuring.

Other features include automatic deceleration in accordance with the radius of curves, which slowed down to about 10 km/h above the legal speed limit (when the driving speed is set higher than the legal speed limit by EyeSight X), thus balancing the flow of traffic around the vehicle.
In addition, a function that automatically decelerates the car before an expressway toll booth allows the car to slow down to a speed of approximately 20 km/h, which is the speed recommended by the road operator. However, many cars only slow down to 30-40 km/h, giving the impression that they are being hailed as they pass through the toll booth.

The regular EyeSight is Level 2 automatic driving, and EyeSight X would be interpreted as "advanced Level 2”.
Subaru's EyeSight developer explained that "the hurdle for Level 3 mass production is very high."
In the 2020s, it is expected that the mass production of EyeSight X will be expanded, and further technological advancements will be made while continuing Level 2.