Articles for ITS market EV (Electric Vehicle) proposals by country

EV in Europe is quite uncertain 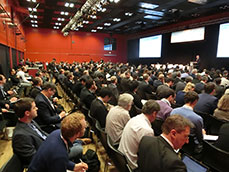 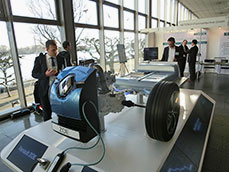 "Shift to EV" became a hot topic in Japan in 2017. A lot of feature articles on EV were promoted in television and economic magazines. Meanwhile, in the background there are EV policies created by each country and region worldwide. For example, both French and British governments have announced their policy which states "Stop selling gasoline and diesel vehicles by 2040". This effectively points toward vehicle electrification. However vehicle electrification does not mean completely EV. It is interpretated as a hybrid car or a plug-in hybrid car combined with an internal combustion engine and electric motor(s).

Meanwhile, Germany, the biggest automobile producer of Europe opposes the French and British policies. Daimler executives said, "It is very difficult at this time to identify the time to abolish gasoline and diesel vehicles, although we are progressing with the EV projects." Daimler plans to launch a new EV brand “EQ” sometime in the 2020s and will introduce EV models targeted at the compact car market.
What do European automobile industry officials ultimately think about EV growth?
In early February 2018 I covered the AABC (International Automobile Battery Conference) Europe 2018, an international conference for electric vehicle batteries held in Mainz, Germany to determine the automotive manufacturer’s true intentions.

AABC originated in the United States and attracted a great deal of attention in the automobile industry during the fourth EV boom around 2010. The current trend in the EV recently shifted and participation is increasing at AABC Europe 2018. More than 950 people gathered from all over the world making it the largest ever.
In conclusion the European automobile industry officials still think EV in Europe is still uncertain.

I mentioned in my recent book "Can Toyota survive in the new era of EV?" The current, fifth EV boom is driven in part by the Volkswagen Group diesel engine computer control fraud problem in 2015. To help restore the corporate image, Volkswagen Group has emphasized "EV shift" in the 2016 medium-term management plan. Considering this Daimler, BMW, Bosch and Continental had no choice but to start collaborating with them. During AABC Europe 2018 I heard many lectures supporting this trend. In other words the EV shift in Europe is really driven by marketing competition and not rapid development of new technology for lithium ion secondary batteries currently used in EV.

In addition the EC (European Commission) presented a speech announcing new CO2 reduction targets of "30 percent by 2030 compared with 2021". It is likely this movement will boost the spread of EV throughout Europe. Currently the EC does not have any momentum to establish a bill restricting the number of EV’s like the California ZEV (Zero Emission Vehicle Regulation) or Chinese NEV (New Energy Vehicle Regulation). 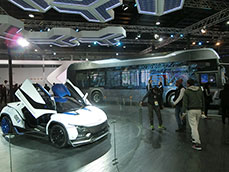 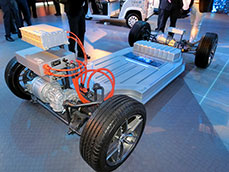 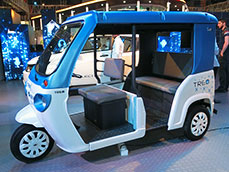 I visited Delhi in India during the following week of travel in Germany to cover the “Auto Expo” held once every 2 years. There were two locations, one is mainly automobile manufacturer exhibits in a suburb of Delhi called “Greater Noida”. The other location is mainly automobile parts manufacturer’s exhibits at a convention center in the center of Delhi city.
The main topic this year was EV. Recently in last year or two an India government official said "All new car sales in India will be EV by 2030". This EV means complete EV (Pure EV) only. Hybrid vehicles and plug-in hybrid electric vehicles are not included. There is no evidence India can meet such a target date, therefore the world automobile industry doubts if India can realize the 2030 date.

Considering this situation the India Automobile Association submitted a proposal regarding EV to the India government in December, 2017. It stated a compliance rate of “40% for EV new car sales and 100% full compliance in EV commercial vehicles”. Even the 100% government target was down to 40% in their latest proposal, however India has very large vehicle market. The scale is 4.1 million and it is listed as the world’s 4th largest, now larger than Germany. Currently India’s population is now 1.3 billion and in 2030 it will surpass China becoming the largest population.

Considering this trend each India automobile company naturally exhibited EV at the Auto Expo. Among them two large India companies, TATA and Mahindra & Mahindra both attracted many individuals attention.
TATA exhibited a full lineup of their EV’s like an EV bus for public transportation and new design EV small trucks. Also their small EV type sport car based on their smart city concept.
Mahindra & Mahindra exhibited an EV tricycle taxi for public transportation, EV platform for C segment and EV tricycle similar to the Toyota super small mobility "i- ROAD”.

Meanwhile the Japanese major companies Toyota and Honda exhibited their existing EV concept models and did not mention EV at any press conferences. One official of the Japanese automotive manufacturers said "Since there are many indefinite elements in the India government EV policy I did not discuss EV at this time.
Multi-Suzuki who has the largest car market share in India exhibited the existing EV concept model. They said, “Hybrid car is the most effective in the India based on their natural environment”. This comment is said to be related to the India government’s income tax hikes for hybrid cars in July 2017.

China seems to be the first priority

As described above I traveled to cover Europe and India in February 2018 and also covered the US in January 2018. I found the most active country for EV was China. In fact the world EV sales for 2017 was 1.4 million with China accounting for half of the sales. In the future the Chinese NEV (New Energy Vehicle Regulation) will be stricter and EV sales in China will continue increasing. I will keep covering the worldwide EV shift.