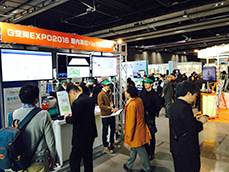 The G-space EXPO 2016 was held November 24 - 26, 2016 at the National Museum of Emerging Science and Innovation. G-space is a generic term for utilizing highly geospatial information. The G-space EXPO is held to highlight and publicize activities and various symposiums, mainly comprised of related companies and administrative agencies.

The background is related to the practical application of the Quasi-Zenith Satellites System (QZSS) in 2018 and promoted by the Japanese government. QZSS is one of the Japanese space strategies decided by the Cabinet in September of 2011. It is a system that complements the United States GPS (Global Positioning System). Currently "MICHIBIKI", the first QZSS satellite is in orbit for demonstration experiments and in 2017 three more aircraft will be launched. For the time being it will be operated as a four-body system. If additional funding can be secured and positive results are achieved with the 4-satellite system there is a possibility that three more satellites will be launched for a total of a seven satellite system. 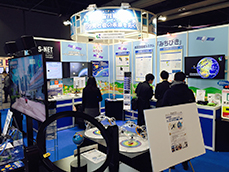 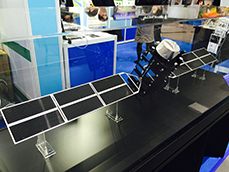 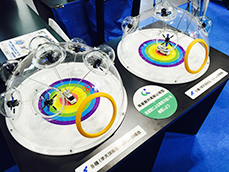 Regarding GPS, in 1994 President Bill Clinton signed a bill to open a portion of radio waves emitted from the GPS system. The US Air Force allowed access and managed these signals to the private sector. Along with this private companies started innovating and satellite positioning technology rapidly advanced.

Included among them since the mid 1990's are companies in Japan. In-vehicle car navigation has become widespread and GPS has become commonplace. Also starting in 2000 mobile phones were equipped with GPS functions. Soon after smart phones emerged and the necessity of GPS for maps, etc. became necessary.

Although the spread of GPS has advanced, in Japan there are circumstances that limit the reception of GPS. This includes mountains where there are many forests throughout the countryside and the central part where there are many high-rise buildings. GPS needs to receive signals from at least four satellites for three-dimensional positioning and at least three satellites for two-dimensional positioning. Also in order to improve the positioning accuracy, it is desirable that those satellites are scattered in a wider area in the sky.

Operation of the QZSS and expectations for Japan's original service 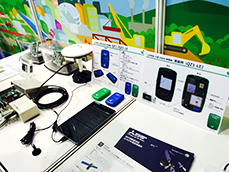 By increasing number of GNSS satellites from (5 to 8) and using Quasi-Zenith satellites, the degree of dispersion in the sky becomes higher therefore improving positioning accuracy

Next, I will introduce technical details of QZSS.
Four planes will be operated for the moment, three of which will span the sky from Japan to above Australia and orbit in a figure 8. Each of the three satellites will have an angle of attack of more than 20 degrees for 16 hours and stay visible in Japan for 8 hours. In other words, there are three satellites in total and at least one satellite will stay at the Quasi-Zenith in Japan every 24 hours for an 8 hour period.

The other satellite is for various backups of the three aircraft and it remains on the equator in a geostationary orbit.
The satellites on the Quasi-Zenith orbit will be 2.8 m in length x 18.9 m in width x 6.2 m in height and will be launched using the H-II 202 rocket. The satellite in the geosynchronous orbit has dimensions of length 7.1 m × width 18.9 m × height 5.4 m. The planned launch vehicle will be the H - IIA 204 rocket. Signals to be used are eight in total and they are L1C / A, L1C, L1S, L2C, L5, L5C, L6, and S band. For normal positioning information four signals including L1C / A, L1C (The center frequency is 1575.42 MHz for both), L2C (1227.60 MHz), and L5 (1176.45 MHz) are used. Receiving these multiple signals are expected to reduce the ionosphere error. In addition if the L1S signal of the sub meter class positioning augmentation information is used, the positioning accuracy (95% value) increases to 1 meter in the horizontal plane and 2 meters in the vertical plane throughout Japan. The L6 signal of precision is a centimeter class positioning reinforcement signal. Used in a stationary object environment it dramatically improves accuracy to 6 cm in the horizontal plane and 12 cm in the vertical plane. Even mobile units such as in cars have a high accuracy of 12 cm in the horizontal plane and 24 cm in the vertical plane. This is the same as RTK (Real Time Kinematic) surveying currently used for surveying etc. By communicating with electronic reference points nationwide and management station along with the GNSS receiver on the ground such surveying concepts are realized.

Movement toward full-scale commercialization of navigation at the Tokyo Olympic and Paralympic Games.

Quasi-Zenith satellites are expected to be used in various applications at these events. To confirm these methods of utilization, experiments tracking one visible "Michibiki" satellite is being conducted.

For example the Ministry of Land, Infrastructure and Transport will operate the "Navigation service to support indoor movement" from November 30, 2016 to February 28, 2017. This will be implemented in four places around JR Tokyo station, JR Shinjuku station, Narita airport, and Nissan stadium in Yokohama. This is a move in anticipation of the Tokyo Olympic and Paralympic Games to be held in 2020.

We are aiming for a barrier and stress-free society where everyone can smoothly move to their destination. This would include foreigners, elderly people visiting Japan and people with disabilities. The indoor beacon uses Wi-Fi and small devices utilizing GNSS. In addition to this during 2017, various verification experiments aiming for practical use will be carried out before the Quasi-Zenith 4 satellite system will be finalized in 2018.