Articles for ITS market Japan's Smart City: New Moves toward Practical Use

There are still many issues to be addressed on how to manage data in smart cities.
Smart cities are a new way of thinking about urban development, and the goal is to use IT to increase the convenience of people's lives and companies' social activities.
In addition, from the perspective of the SDGs (Sustainable Development Goals), various companies in the transportation, communications, energy, and other fields are collaborating with local governments to conduct various demonstration tests or are studying the implementation of such tests.
Against this backdrop, Toyota's Woven City is attracting attention as a smart city led by an automaker.

Toyota President Akio Toyoda unveiled the world premiere of the Woven City concept at CES (Consumer Electronics Show) 2019, the world's largest international trade show for consumer electronics and IT, in Las Vegas, U.S. in 2019.
In the automotive industry, from the mid-2010s, and due to the influence of CASE (Connected, Automated Driving, New Services such as Sharing, and Electrification) advocated by Daimler Mercedes-Benz of Germany, the interpretation that a "once-in-a-century industrial revolution" is taking place from the 2010s to the 2020s has spread around the world.
The relationship between the car and society is being examined in terms of power supply systems and data management.
Toyota Woven City is currently the only example of a large-scale, futuristic experimental city built by an automaker on its own in the world.

On February 23, 2021 (Mt. Fuji Day), a ground-breaking ceremony was held at the site where Woven City will be built.
As of October 2021, the foundation work is progressing steadily.
So far, there have been no announcements based on specific materials or data about the activities of Woven City, and President Toyoda has only given fragmented explanations in the question-and-answer session of the earnings announcement. 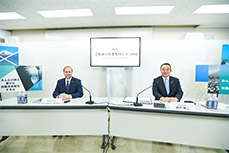 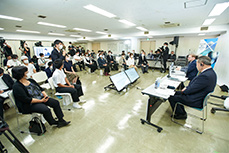 Against this backdrop, Susono City in Shizuoka Prefecture, where the Even City is to be built. An online briefing was held for the media and citizens on October 5, 2021, titled "Toward the Realization of a Prosperous Rural Future City Susono, that everyone can be proud of”.
The two attendees were Kenji Takamura, mayor of Susono City, and James Kuffner, director of Toyota and CEO of Woven Planet Holdings, the company that oversees Toyota's new IT development.

To begin, there was a Toyota-affiliated automobile assembly plant that started operation in 1967 on the site where the Woven City is to be built. It ceased production in December 2020 and transferred its operations to a Toyota-affiliated plant in Miyagi Prefecture. Toyota and Susono City have had a deep, community-based relationship for more than 50 years.
In this online briefing session, the city of Susono, which is close to Woven City, introduced a regular seminar led by the city of Susono in the Iwanami district of Susono City. Where residents participate in thinking about the relationship between Woven City and the local community.
Specifically, Toyota will use the corporate version of the Hometown Tax Donation Program to redevelop the area around Iwanami Station on the JR Gotemba Line in the Iwanami district. The e-Palette, a small self-driving bus used at the Tokyo Olympics and Paralympics, and the C+walk T, a small stand-up mobility vehicle already on the market by Toyota, will be used to make the area around Iwanami Station a transportation node to Woven City.

Also, Susono City has the Fifth Susono City Comprehensive Plan, which was compiled in January 2021. In this plan the city has launched the Susono Digital Creative City Concept, which takes into consideration the collaboration with the Woven City.
Toyota and Susono City, from their individual perspectives, value opportunities for face-to-face discussions on how the Woven City and the local community should deal with each other through workshops and online information sessions.
In such situations, the challenge is the handling of data.

CEO Kuffner touched on the foundation of the project, saying, "Generally speaking, most projects that are called smart cities are based on public land, but Woven City is a private area related to Toyota.
In addition, he pointed out that further discussions are needed between Toyota and Susono City on how to structure the ownership and management of data, and the movement of people and goods in the Iwanami area.

As examples of smart cities worldwide, the area around Peking University in China, where IT companies are concentrated, and Seattle, Washington in the US, where Amazon's headquarters are located, have an environment that is easy to commercialize because of the close relationship between the entities and the government already in place.
Meanwhile, in the case of Google's new attempt to expand in Toronto, Canada, the initiative was ultimately abandoned, albeit due to a variety of factors.
A major hurdle to the success of smart cities may be the difficulty of sharing data between private and public areas, as pointed out by CEO Kuffner.

In order to facilitate the management of data between such companies and government agencies such as municipalities, there is a concept of urban OS.
Operating systems (OS), such as Apple's iOS and Google's Android, are well known, but in general, urban OS is often used in the sense of a platform for data.
In Japan, there are discussions about urban OS in various ministries and agencies.

For example, the Ministry of Land, Infrastructure, Transport and Tourism (MLIT) discussed the idea of a MaaS (Mobility as a Service) platform at the 2020 MaaS (Mobility as a Service) Study Group. In this discussion, the Ministry expressed the view that Japan has no choice but to make effective use of existing systems (or operating systems) with global standards.
In other words, the interpretation is that co-prosperity and coexistence with GAFAM (Google, Apple, Facebook, Amazon, and Microsoft) is necessary.

Until fiscal 2020, the Japanese government has had a total of five consultative bodies, including the Cabinet Office, the Ministry of Internal Affairs and Communications, the Ministry of Land, Infrastructure, Transport and Tourism, and the Ministry of Economy, Trade and Industry, working side by side on policy planning for smart cities, MaaS, and other data-driven urban development. It is possible that the Kishida administration will consolidate these discussions around the newly established Digital Agency.
A re-examination of industry-academia-government collaboration begins for the practical application of Japan's version of a smart city.