Articles for ITS market When will self-driving buses (service cars) be put to "full-scale" practical use? 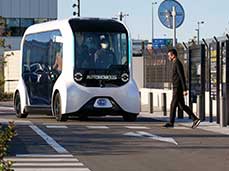 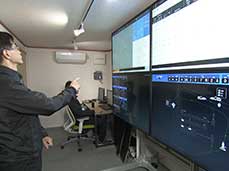 Background and Lessons Learned from Contact Accidents at the Paralympics

The day after the accident, Toyota's president Akio Toyoda explained the circumstances of the accident as known at the time on Toyota's own video channel, “Toyotimes”.
Then, on August 30, Toyota and the Tokyo Paralympic Organizing Committee announced that they would resume operations after taking safety measures to prevent similar accidents.
According to the announcement, the circumstances leading up to the accident were the vehicle stopped after sensing a person in the intersection. The operator in the vehicle then resumed driving after checking the safety of the surroundings.

Furthermore, the operator judged the situation inside the intersection and started to decelerate the vehicle by manual operation.
Then, the Paralympic athlete crossed the street, and the vehicle's sensors detected and automatically applied the brakes, and the operator further applied the emergency brakes, but was unable to prevent the contact accident.
In addition, there were two guides at the intersection, but "there were no traffic lights.
The environment was not conducive to guides being able to check pedestrian movements and vehicles from multiple directions.
Especially in situations with such a diverse group of people as the Paralympics," according to the analysis.

They also pointed out that there was not enough coordination between the guides and the operators.
As future safety measures, the buses will be switched from automatic to manual operation during the Paralympics, and the volume of the alarm sound when approaching will be increased.
The number of guides will also be increased from six to 20.
It is important to note, this demonstration test was planned to showcase and introduce Japan's automated driving technology to the world. Level 4 driving without an on-board operator is technically possible, but in order to ensure vehicle safety, a method of relying on the "human eye" of an on-board operator, a guide, and remote monitoring was adopted.
Nevertheless, the fact that these accidents occurred is an extremely important lesson for the future use of automated vehicles (service vehicles) in public transportation. 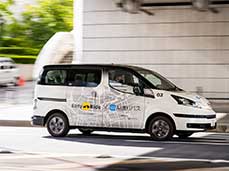 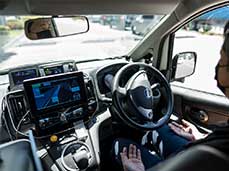 A view of the driver's seat of an Easy Ride vehicle Source: Nissan. 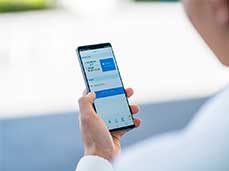 A view of using NTT DOCOMO's app in conjunction with an AI-operated bus Source: Nissan.

Nissan will conduct the third phase of the "Easy Ride" automated driving on-demand demonstration test in the Minato Mirai district of Yokohama from September 21, 2021 to October 30, 2021 (8:30 a.m. to 4:00 p.m.).
This time, it will be linked to the AI-operated bus, and an application service for smartphones that NTT DOCOMO is running nationwide.

The AI-operated bus is a system in which AI (artificial intelligence) sets the best route and time, based on the status of boarding and stopping requests. According to Nissan, NTT DOCOMO customized the system to fit Easy Ride based on Nissan's various requests.
In addition, the e-NV200 EV, which will be the vehicle, has an onboard ECU with a system for monitoring and making decisions while driving. As a result, unlike the previous two demonstration tests, there was no operator in charge of the system on board, and the support car that follows the vehicle from behind was also eliminated.

The Easy Ride's route is in areas with heavy traffic of people and cars, such as the Red Brick Warehouse and the Yokohama Chinatown areas. Even with Level 2 automated driving with an operator in the driver's seat at all times, careful consideration must be given to ensuring safety.
The timing of the third phase of the Easy Ride demonstration test is set just after the aforementioned accident at the Tokyo Paralympics athletes' village, which means that Nissan will once again be raising awareness for the need to ensure safety of its operations.

On September 9, Nissan held an online briefing for the media regarding the third phase of the Easy Ride demonstration test.
would focus on developing a realistic system for the operation of self-driving service cars. They said, "It's all about doing things step by step, starting from where we can, rather than jumping multiple steps ahead.”

Commercialization of self-driving service cars is still far into the future.

Nissan also touched on the business potential of self-driving service cars.
Nissan is envisioning a fusion of MaaS (Mobility as a Service), which links various services in an IT environment. It includes the reuse of EV storage batteries, freight and passenger transportation, and VGI (Vehicle Grid Integration). And connects EVs with social infrastructure, in a way that is tailored to the actual conditions of each region, including urban or rural.

However, he explained they are not at the stage of indicating the specific balance of the project and that they will continue to study the feasibility of the project through demonstration tests in various parts of the country.
As for automated driving, mass production of Level 3 owner-driven cars has started, but demand is likely to be limited due to the high price. For the time being, the mainstream of owner-driven cars is likely to be Level 2 with advanced functions.
As for service cars, further improvements for safe and secure operation and concrete activities for commercialization are essential.