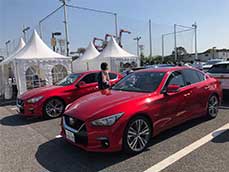 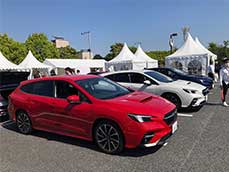 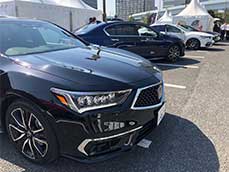 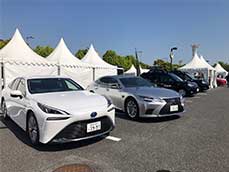 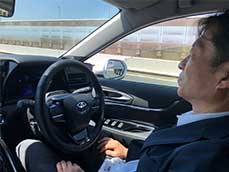 Test driving on the MIRAI, with hands-off.
(The mask is temporarily removed to be recognized for system operation.)

An interim report of the Strategic Innovation Program (SIP)

On April 20 and 21, 2021, the latest models of Autonomous Driving and Advanced Driver Assistance System (ADAS) gathered at the Tokyo waterfront area Odaiba.
The event was a part of the government's Strategic Innovation Program (SIP), providing test drive experience for the press.

Originally planned as a showcase to advertise Japanese technology to the world during the Tokyo Olympics and Paralympics in July 2020, the event was delayed 9 months due to the spread of the COVID19.

A total of eight companies participated in the event; four automakers (Toyota, Honda, Nissan, and Subaru), two overseas auto parts manufacturers (Valeo France and Continental Germany), one venture company (Tia), and one university (Kanazawa University).
I will introduce the above four automakers in the order that I took the test drive.

The first test vehicle was a Skyline with the ProPilot 2.0 advanced driver assistance system, which was launched in September 2019.
It was the first Japanese model to have a hands-off function in the same lane.
Actually I had test-driven this model before, but this time it was a benchmark for the other tests.

The feature of this product is its high calculation method of the vehicle's position using a high-precision 3D map, "Dynamic Map." It was developed and commercialized through the industry-academia-government collaboration within the country.
The onboard sensor is a Tricam that uses algorithms developed by Mobileye, an Israeli venture under the Intel focus on image recognition technology. The angles of view for short, medium and long distances are set at 150 degrees, 54 degrees and 28 degrees respectively.

There are two actions during the drive, pressing the ProPilot 2.0 switch and then the set switch, which is the same setup as the normal ProPilot.
Meanwhile the display on the dashboard turns green and if it changes to blue, the conditions to activate ProPilot 2.0 are ready.
If the lane change assist switch on the steering assembly was pressed while ProPilot 2.0 is on, the car automatically changes lanes when the speed difference compared to the car in front was 15km/h or more.
There was no difficulty operating the controls and the activation timing of the various assistance functions is appropriate.

For technical details, please refer to the previous article in this column. (Article: Technical of Subaru "EyeSightX")
When compared to Nissan's ProPilot 2.0, Subaru’s EyeSight X took a little more time to reach the required conditions for activation. However, there are some functions unique to EyeSight X, including automatic deceleration at toll gates, which is very useful while driving.

EyeSight X does not use dynamic maps, but rather a unique high-precision 3D map created in collaboration with a map maker. The developers of EyeSight X explained that this helped balance the cost to match the price of a Subaru.

It is a new model Legend, the world's first level 3 self-driving car.
In level 2 state, the human driver takes primary control. The basic operation method is similar to Nissan and Subaru, press the main switch first. When the dashboard turns green, the ACC (Active Cruise Control) and LKAS (Lane Keeping Assist System) are activated.
If the conditions allow for autonomous drive mode, the dashboard display will turn blue, indicating that hands-off driving is possible.

When the driver presses the button for the advanced lane change support system, the car automatically starts changing lanes after the speed difference with the car in front reaches 15km/h, and then returns to its original lane after overtaking.
In addition, if the speed drops below 30km/h, the Traffic Jam Pilot (traffic jam driving function) will be activated, and from this point on, the automated system takes over vehicle control. The driver can now watch DVDs, operate the navigation system, etc., without the need to constantly monitor the road ahead.

During the test drive, when the Traffic Jam Pilot was activated, the car actually moved very smoothly. I tried to intentionally look in other directions, but somehow it was a strange and uncomfortable feeling. I felt the need to force myself to trust the automated system.

There were two fuel cell vehicles, the Lexus LS500h and the Toyota MIRAI which I tested.
One of the major differences from Nissan, Subaru, and Honda is that the operation to activate, is a single press of the main switch. Also, pressing the main switch twice activates the regular ACC (Active Cruise Control) and LKAS (Lane Keeping Assist System) instead of the “Advanced Drive”.

Even in that case, if the conditions are achieved, the display will ask if the driver wants to switch to the “Advanced Drive”. By selecting "Yes" using the switch of the steering wheel, it will activate the “Advanced Drive”.
Under the “Advanced Drive” mode, the grey display on dashboard indicates hands-on status, and turns blue when hands-off status is enabled.
To switch to the hands-off status, the system needs to recognize the driver's face, so it did not work with a mask. Alternatively, if the mask was put on after the switch to hands-off, the system returned to the hands-on status after a few tens of seconds.

As a result, the Toyota system design has a more stringent setting for driver recognition in the driver monitoring system when compared to Nissan, Subaru, and Honda.
In terms of lane changing, the required conditions and operations were similar to those of Nissan, Honda, and Subaru, but Toyota seemed to be the most cautious company when it came to lane changing.
Another feature of the “Advanced Drive” is that when a destination is set in the navigation system when using a highway, it automatically changes to the lane next to the main exit when approaching the destination.

After the two-day test on the latest systems from the four companies, I felt that aside from Honda's Traffic Jam Pilot, which is a unique system, all companies appointed similar methods in the way they operate the level 2 systems.
This is not surprising, considering the actual demands when driving a car. Aside from that, each company has to appeal their features of their products respectively.