Both CES America and CES China shows were heavily influenced by the automotive industry. 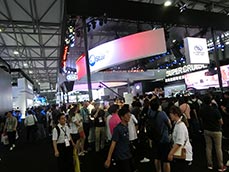 The scale of the CES Asia was only a quarter the size of the CES in Las Vegas, but it was crowded with visitors from all over the world. The majority of the CES exhibitions revolved around the automotive industry. This trend is similar to CES in Las Vegas. In the past five years 3D printers, wearable glasses, wearable watches and VR (Virtual Reality) technology were the major exhibitors. However this year automotive manufacturers easily overwhelmed those industries. Both in Las Vegas and Shanghai I felt CES's leading influence was driven by the automotive industry. 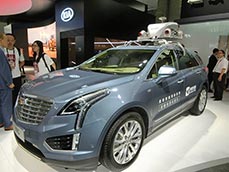 From 2019 the Chinese government will implement a new energy vehicle (NEV) policy that mandates and obligates every automobile manufacturer sell a certain number of EV automobiles. The NEV regulation is based on the Zero Emission Vehicle (ZEV) regulation law that California state in the USA has been implementing since 1990. It was enacted as a form of technical cooperation between the Chinese government and California state government. Therefore the contents of the NEV and ZEV regulations are similar. The conversion factor details are based on the degree of electrification such as EV, plug-in hybrid car, fuel cell car, etc. By virtue of these categories and number of credits calculated, the number of electric vehicles sold is effectively mandated. Specifically and according to the NEV regulation, our target is 10% of the domestic demand in China in 2019 and 12% in 2020.

Viton was born during the Chinese EV bubble economy. They are trying to make cars similar to smartphones. 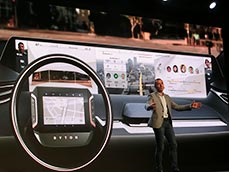 Based on the NEV regulation the EV bubble economy has occurred in the Chinese automobile industry and many EV start-up companies are well positioned to become winners.
Among them, Viton is very famous. Engineers from Germany BMW and others founded and launched Viton in 2016. They located their headquarters, development functions and assembling factories in Nanjing, Jiangsu. They have technology development in Munich Germany and software development in Silicon Valley in the USA. They will start mass production at the Nanjing factory in the second half of 2019. It will be a 5-door crossover car called "Embite". Key features are the Human-Machine Interface (HMI) which has a 1250 millimeter width and a 250 millimeter height located in front of the driver's seat. The power system data such as speedometer, navigation, and even SMS text are collectively displayed here. The Viton’s executives appealed to nearly 1,000 audience members and noted "We are trying to make cars become smartphones" in the keynote speech at CES Asia. 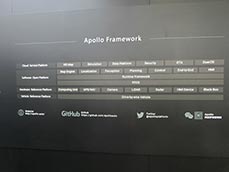 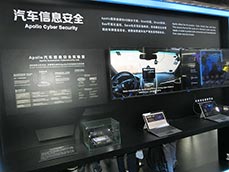 Explanation panel of cyber security measures in the Apollo plan 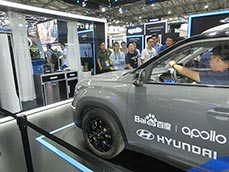 To cooperate with automobile manufacturers development great attention is currently on Baidu, China's leading IT company project called Apollo. This project refers to the autonomous driving platform announced in the spring of 2017. Baidu is not well-known in Japan and people call Baidu the “Chinese Google”. The founder of Baidu attended Stanford University in the USA studying search engine technologies, etc. almost simultaneously while the founder of Google was studying the same subjects. After returning to Beijing the founder started providing search engine sites and digital maps online. They now have a large-scale database and facility on artificial intelligence (AI) research and are becoming a central source in the Chinese IT industry.

More than 200 companies, including international car manufacturers such as Honda and Hyundai have already joined the Apollo Consortium in the Baidu. The Apollo program is characterized as open sourcing at each technical layer of mass production for autonomous driving operations. DuerOS is their own standard OS for sensors such as cameras, millimeter wave radar, laser radar, image recognition software and cyber security. Medium-size buses and automatic delivery vehicles operating at autonomous driving level 4 with interactive voice recognition have already been launched by them. Regarding DuerOS, Baidu announced a technical alliance with Hyundai in 2017 and the exhibition was demonstrating DuerOS incorporated in Hyundai's multipurpose vehicle. Baidu already has success with a product that interfaces into a large 17-inch HMI installed in the car that controls air conditioners and audio in their house. As a competitive technology to Amazon “Alexa” and Google “Google Voice” their goal is to become the “de facto” standard in China.

Also, “Alibaba”, the leading IT company in China unveiled a worldwide technology using Bluetooth mesh, a new Bluetooth standard for collaborating home electronics and other devices. Alibaba aims to become the “de facto” standard by distributing a dedicated semiconductor chip at a low price. However they did not disclose any cooperation with the automotive industry at this time. As shown above, CES Asia exhibitors are supporting the development of EV and autonomous driving as a data business more than a hardware business.