Articles for ITS market Technology of Subaru “EyeSight X”

The History of ADAS was started by EyeSight

Subaru's Advanced Driver Assistance System (ADAS), “EyeSight”, has been fully redesigned. It will be installed in the new “Levorg", which will go on sale in October 15, 2020.

The origin of EyeSight is the Active Driving Assist (ADA), which Subaru installed in the Legacy Lancaster in 1999.
The ADA name was changed to “EyeSight” in 2008. Under the catchphrase of "collision-free car," Subaru conducted extensive promotion of the ADA.
Its effectiveness was so good that the "EyeSight" system prompted other automotive manufacturers to start developing ADAS. 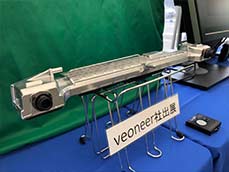 The next generation EyeSight and stereo camera unit from Veoneer.（Photographed by the author） 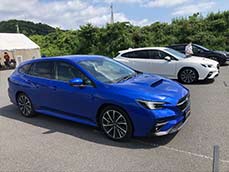 The new Levorg prototype test drive.（Photographed by the author）

The next generation Eyesight has evolved.

In terms of technology of the next generation EyeSight, three things were changed. Firstly, the stereo camera unit became smaller in size. I rode in the car and found that vehicle interior room had become more spacious. Secondly, the supplier was changed. Subaru had been procuring stereo cameras from Hitachi Automotive Systems, but it was v changed to a new supplier, Veoneer of Sweden.
Veoneer was established as a subsidiary of Autoliv. Thirdly, the new millimeter wave radar with a frequency of 77GHz was installed at front of the car to prevent collisions. Its millimeter-wave radar for example can detect a cyclist crossing against a vehicle, at a speed range between 20 and 60 km/h to avoid a collision.
The performance of the next-generation EyeSight's millimeter-wave radar is already high enough to fulfill the assessment requirements of EUNCAP and JNCAP, which will be introduced in the next few years. 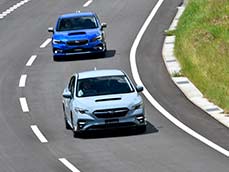 A view of the car driving with the EyeSight X installed. Source: Subaru 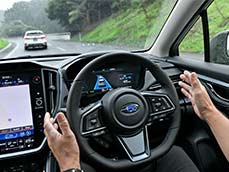 A view of hands-off assist being activated on the EyeSight X in traffic. Source: Subaru

Features of the optional EyeSight X

The next generation EyeSight will be installed in all new Levorg models. The optional “EyeSight X” is also available for those who need higher performance, which costs approximately JPY350,000.

EyeSight X is available for use on Japanese highways only and has five features below.

I experienced all of these features and found that Subaru’s EyeSight X was not only high performance, but also a user-friendly design