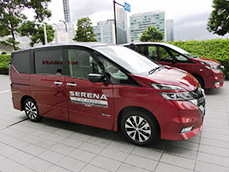 The test ride car of the new SERENA at Nissan headquarters

Some media sources say “SERENA's ProPILOT is just for the same lane automatic driving. Because of this it should only be included in the ADAS category and should not be considered an autonomous driving system. Furthermore the naming could cause issues because of potential misunderstands to users that do not understand the difference between the ProPILOT specification and a completely autonomous driving system”. Nissan took objection to these media sources and said “In order to eliminate any misunderstanding, we have been educating and training all of our dealers thoroughly”. 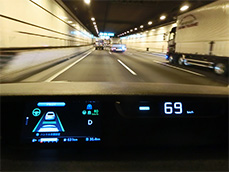 The test ride using ProPILOT on the highway 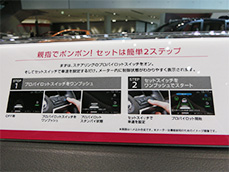 There are many exhibitions regarding ProPILOT at the Nissan headquarters showroom.

In the beginning of September the media test ride event for the new SERENA was held in Nissan headquarters. The test ride route was the Metropolitan Expressway and Yokohama area. I rode in the car and experienced the same lane automatic driving. The operation was very easy and required pressing just two buttons. First pressing the button on the steering and then pressing the set button.
The same lane automatic driving technology has two functions. One is following a forward car with a possible speed setting between 30 to 115 kilometers per hour. The second function is to keep car the driving in middle of the lane by recognizing the lane lines. Once this function is set when the car is being driven under 50 kilometers per hour, the function only allows engagement when following another car. When the car is being driven over 50 kilometers per hour, the function allows engagement regardless of following another car or not.

According to Nissan's engineer the same lane automatic driving function can be set for highway and local road driving, but the requirement for local roads are stricter than the highway. I operated on both during the test ride. When I was on the highway the setting engaged quickly, but when I was on the local road the setting took longer to engage. I asked the engineer for the local road requirements but he said he could not display it. However he told me that there is no difference regarding how the actual highway and local road recognition is done. Nissan uses image information from the camera only and does not use GPS or “around view” monitor information for the recognition solution. Nissan is currently working on the research and development for multi lane automatic driving and expects mass production in 2018. The engineer said “For multi lane automatic driving a millimeter wave radar is needed for lane changing capability”. 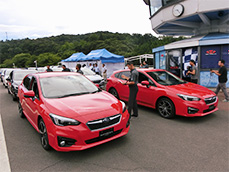 The prototype of the fifth generation “IMPREZA Sport”, SUBARU

The inside of the fifth generation “IMPREZA”, SUBARU. The display includes “EyeSight” support. 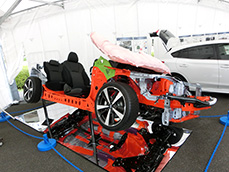 The “IMPREZA” standard equipment airbag for pedestrians is shown deployed.

SUBARU is a company that has been leading the ADAS development in Japanese car manufactures. The ADA（Active Driving Assist）deployed in “Lancaster” in 1999 was their first ADAS system. Afterward they released their own advanced ADAS system named “EyeSight” which was very famous using the TV commercial catchphrase “collision avoidance car”. After 2010 SUBARU lowered the “EyeSight” price and set it as a DOP. It was very successful and sales of “EyeSight” increased rapidly.

The new “IMPREZA” was announced on July, 2016, will be released this fall and has “EyeSight” as standard equipment. According to a SUBARU engineer, the “EyeSight” deployed in the new “IMPREZA” is an improved version called “EyeSight version3”. One change is the distance setting between followed cars is improved. SUBARU tested it in Japan and found that thanks to this new improvement the car drove similar to an autonomous vehicle.
In the new “IMPREZA” the airbag for pedestrians is enabled when using “EyeSight”. This airbag deploys under the windshield when needed. It is designed to protect pedestrians who have contact with the hood after being struck by the front bumper because it opens outward, toward the pedestrians. Along with these safety features the price should also be attractive to buyers because the least expensive one is less than two million Japanese Yen.

Including the above mentioned Nissan and SUBARU, car manufactures have many sales in Western countries and are in the process of improving their ADAS systems. The reason is they need to support the NCAP’s collision standard. To Japanese car manufactures the biggest concern is the revisions to pedestrian protection that start from 2016 and 2018 by the European NCAP. The night pedestrian protection will be added to the revision in 2018. Because of the European NCAP the importance of pedestrian protection will also increase in the JNCAP, the Japanese NCAP and related assessments in the US. The Japanese car manufactures are working to include a completely autonomous driving system in their ADAS program in the future. They will also need to first evaluate each region’s requirements separately. The purpose of this assessment is different from other kinds of regulation like exhaust fumes, CO2 etc. The purpose is to provide useful information to consumers by reviewing each kind of test result held by the public institutions. Car sales are influenced by these assessments and can result in car manufacturer gains.