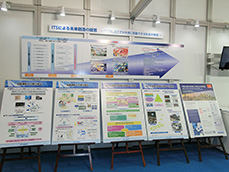 Recommendations for future ITS presented by the Japanese government. 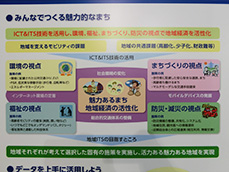 Explanation of the development of ITS technology.

Japanese car navigation systems, VICS (Vehicle Information and Communication System) and ETC are recognized as the most advanced, practical use ITS (Intelligent Transport System) available anywhere.
According to the Ministry of Land, Infrastructure and Transport of Japan, as of March 2016, the number of car navigation systems has spread to approximately 70 million units. The traffic information system VICS is 50 million units and the automatic toll collection system ETC is 53 million units. Such an achievement is the direct result of the government's continuous efforts. The Japanese government has been involved in research on 172 services in nine different fields, in cooperation with the relevant five ministries and agencies with private sectors from 1999.

Among these Japanese ITS strategies, the ITS segment was introduced in 2011. In the ITS area we initiated dynamic route guidance that expands VICS, previously limited to prefecture-specific traffic information to the nationwide level. Furthermore, safe driving support utilizing “big data” such as informing drivers of falling objects and broken vehicles on the highway. Also driver notifications of weather conditions ahead in long tunnels, etc. were incorporated in the ETC equipment.

In 2015 the service was further improved with integration in the cloud, including traffic jam information and reducing toll road charges by changing the route. The name was also changed from ETC to ETC 2.0. The biggest difference between normal ETC and ETC 2.0 is the amount of bidirectional data communication between the on-board device and the roadside infrastructure.

The four focused areas of ETC 2.0 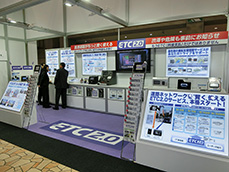 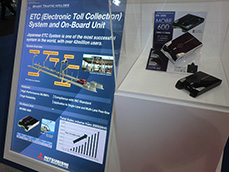 As of October 2017 the numbers of roadside ETC 2.0 units are about 1,700 on highways and about 1,900 on national highways. There are typically two types of data collected from the on-vehicle devices by the roadside devices.
One is the running history data including time, position (latitude / longitude) and speed. Data collection occurs at every 200 meters of mileage change or when the heading direction changes by 45 degrees or more. The other behavior is based on history data, time, front and rear left/right acceleration and change of yaw angular velocity with respect to horizontal direction. These are collected when the acceleration changes are =>0.25 G or the yaw angular velocity changes by =>8.5 degrees/second.

Such data is called probe data and integrates and aggregates data to a dedicated server. This data is sent to the road administrator such as the capital high speed.
Based on these technologies, the directions that ETC 2.0 aims for are (1) Wise investment in road infrastructure, (2) A fee system that reduces congestion and accidents by managing traffic, (3) Setting smart fees using an adoption of a toll system corresponding to mileage, etc. and (4) Smart logistics management to optimize truck transport.

When the normal ETC users are traveling on a highway, if they get off to use the general road gas station or other facilities they are charged the express fee to get back on. This is because the Ministry of Land, Infrastructure and Transport of Japan defines it as "A withdrawal to facilities outside the expressway". There is an effort to improve this situation by using ETC 2.0. A demonstration has been done on several expressways in Japan including the Kanetsu expressway in Gunma prefecture, Shin Tomei expressway in Aichi prefecture and Sanyo expressway in Yamaguchi prefecture etc. The demonstration experiment is to not re-charge when users get off the expressway and meets the condition of the temporary withdrawal.
In the demonstration, DSRC (small range communication) equipment which is same as ETC 2.0 roadside system was installed at service stations. The DSRC recognizes vehicles arriving from the expressway. As of October 2017 there are about 100 sections where resting facilities including highway service and another area are separated by more than 25 kilometers in Japan. The Ministry of Land, Infrastructure and Transport of Japan is considering the “non-recharge temporary withdrawal” for those sections.
In addition to this there is another idea to reduce charges. If ETC 2.0 users take a detour due to a traffic jam, the charge reduces. For example, ETC 2.0 users take the Kenodo expressway instead of going through the central area roads in Tokyo. This is an area where Japan’s Ministry of Land, Infrastructure and Transport is trying to control traffic by using price differences based on the traffic situation.
There is also an idea for cases including disasters and large-scale accidents where the users are not re-charged when they get off the expressway temporarily and then get back on again.
From another point of view, simplification of traffic permission in truck logistics is being implemented and is called “Special car gold system”. In the case of large-sized transport vehicles, it is necessary to apply for permission from the administrators of each expressway and also apply for the normal road traffic permit certification in advance. Managing big data using running history simplifies the application process which leads to reduced costs for both truck operators and road managers.
As of November 2017 ETC 2.0 has shipped about 1.2 million units. It is more than 2% of the normal ETC and is expected to increase.
In the future as various new ETC 2.0 services are put into practical use, the transition from the normal ETC to ETC 2.0 is expected. In addition according to the officials of the Ministry of Land, Infrastructure and Transport's ITS Promotion Office it is likely that as ETC 2.0 continues, the service which uses captured images of in-vehicle cameras will be controlled by the cloud .