Many more French cars have been introduced to Japanese market

Recently, French cars have been gaining more attention in Japan. Here we explore some of the reasons.

The Japanese typically think of German cars when it comes to imported cars. Italian vehicles, including Ferrari and Lamborghini are also well recognized. American cars are characterized by larger bodies and unique features. Meanwhile French cars had been less recognized by the Japanese.

Online launching events for the Citroën C4 and Peugeot 208 were held in June and July, which were well attended. Both Citroën and Peugeot are French manufactures.

The Citroën C4 is a compact car classified into C segment and it is a five-door hatchback.
The size characteristics are 4,360mm in length × 1,800mm width × 1,525mm height. It is available in both gasoline and diesel. A new EV version of the Citroën C4 with a maximum output of 100 kW has just been added and can run 350km without recharging.
The Citroën boom has continued in Japan in recent years. Therefore, it is natural that the newly introduced "C4" is gaining popularity. 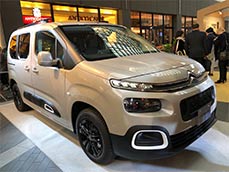 Citroën minivans “Berlingo” were sold within 5 hours by online pre-sales. (Photographed by the author)

All were sold within 5 hours. It is said that the Japanese like its unique body design as well as interior design, which Japanese car manufactures sometimes are not so good. Even in Japan, where the penetration rate of minivans is high the uniqueness of the Berlingo design is highly appreciated.

In addition to the design, engine performance is also notable. The strong torque gained under light acceleration and high fuel efficiency are also appealing.

In Europe, commercial vehicles account for two thirds of the demand for Berlingo. The Renault "Kangoo" is also recognized as a commercial vehicle in Europe. However both were established as general passenger cars in Japan.
In the 1990s, the Chevrolet “Astro” caused a similar reaction in Japan. It was unusual to treat “Astro” as a general passenger car in US at that time, but it was introduced as such in Japan and the uniqueness in design was the key for its success.
In the Kangoo’s case, information shared by users, such as SNS, helped raise awareness in Japan. Berlingo’s awareness on the other hand, was raised by a deliberate branding strategy by Citroen. That was a key for success in the Japanese market. Obviously, they intensely feature unique design when promoting their cars in Japan.

"Citroen's House" was held in Nikotamagawa, Tokyo in November 2019. (Photographed by the author)

Monetization with a "lifestyle" strategy

When it comes to Citroën, there are many people who imagine the French culture of the classical small cars including "2CV" and "DS".

However, the unique design and technology caused financial difficulties and they were absorbed by Peugeot.
I was worried about Peugeot's new product strategy after the acquisition even though I had been fascinated by Citroën with its French culture in the 1970s.

Up until 10 years ago Citroën made various attempts but it did not work well, however the new brand strategy of the 2010s brought big changes.
While promoting commonality of parts with Peugeot the company promoted product planning based on the "diversified lifestyles of users." I went to an exhibition called "Citroën's House" which was held in Tokyo in November 2019.

The concept of Citroën's House was “comfortable space, boldness, and humanity." This lifestyle-oriented product strategy is boosting Citroën. 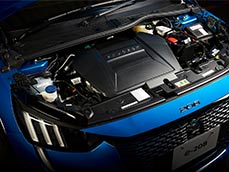 Branding strategy: EV becomes the key for the next stage.

Citroën‘s brand strategy symbolized by the Citroën's home has succeeded.
Citroën Brand’s CEO, Vincent Cobée emphasized that promoting this new strategy has boosted sales by 30% in Europe over the past six years. The new EV “e-C4” may support the further development of Citroën. It is a 100kW motor with a battery capacity of 50kWh. The acceleration of 0 to 100 km/h is 9.7 seconds. It can reach 350km when fully charged. In their latest announcement, they did not address the launching in Japan.

However, Peugeot "208" which shares the platform with "C4" will be launched in Japan. It is compatible with CHAdeMO, the rapid charging system.
Meanwhile the gasoline-powered vehicles have a 1.2-liter turbo engine. This has been in compliance with CO2 regulations in Europe in recent years. Peugeot aims to further spread Evs in the global market by having two options for the same model: EVs and gasoline vehicles.