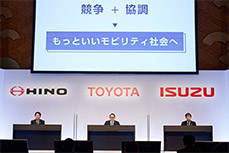 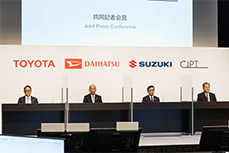 Finally, the commercial vehicle business has reached a major turning point.
Three presidents, Toyota, Suzuki, and Daihatsu, held a joint press conference on July 21, 2021, revealing that the three companies will cooperate in the business of light commercial vehicles.
Suzuki and Daihatsu have been rivals in the mini car market for many years, but in the midst of the so-called "once-in-a-century revolution in the automobile industry," Toyota has taken the lead in bringing the two companies together.

Specifically, when Toyota, Isuzu and Hino announced their business collaboration in March 2021, a joint venture called Commercial Japan Partnership (CJP) was established under the leadership of Toyota, and Suzuki and Daihatsu join it.
With the establishment of the five-company structure, CJP will account for 70% to 80% of all commercial vehicles manufactured and sold in Japan. It also provides full coverage of long-distance transportation by large buses and trucks, intra-city and regional transportation by small and medium-sized trucks, and small deliveries by light trucks.

There are two main purposes for the five companies to collaborate.
First, of course, is the support for carbon neutrality.
The Japanese government presented its Green Growth Strategy in December 2020, aiming to achieve carbon neutrality by 2050. Carbon neutrality is the concept of offsetting the amount of carbon dioxide (CO2) emitted by companies and individuals in their social activities, with the amount absorbed by forests and other natural areas. In addition, in his policy speech at the ordinary Diet session in January 2021, Prime Minister Suga clearly stated that "100% of new cars, including mini cars, will be electrically powered by 2035 at the latest," and the collaboration between Suzuki and Daihatsu in mini cars was seen as essential.

Another objective is to increase customer convenience.
For the automotive manufacturer, customers are transportation companies and shippers, as well as the general public who receive packages and shop at supermarkets.

A firm grasp of the overall picture of the movement of goods, or logistics, on the part of automobile manufacturers will strengthen cooperation among delivery service providers and reduce total transportation and delivery times, thereby reducing costs and keeping food products fresh. Changing the view, it can be said that there is hardly any mechanism to penetrate the whole logistic at the present time.
In other words, at present, there is almost no system that can integrate the entire logistics system.

Looking at the commercial vehicle market in figures, the number of vehicles owned in Japan is 78 million, of which about 40%, or 31 million, are mini vehicles. In addition, 8 million units, or about a quarter of the 31 million units, are light commercial vehicles.
As for light commercial vehicles, small one-box cars such as Suzuki's "Carry" and Daihatsu's "HIJET" are used for small deliveries by major transporters such as Yamato Transport and Sagawa Express. In addition, light trucks such as Suzuki's "Carry Truck" and Daihatsu's "HIJET Truck" are used in a wide range of fields including agriculture, construction, and building.

On the other hand, looking at the logistics industry from another perspective, there are about 60,000 logistics companies in Japan in total, and about 70% of them are individuals or small businesses with less than 20 employees.
Toshihiro Suzuki, president of Suzuki Motor Corporation, and Soichiro Okudaira, president of Daihatsu Co., Ltd. expressed that the field of logistics is operated by wisdom and intuition based on human experience.
In other words, there are few cases where data on the operation methods of individual companies and data sharing among vendors are used.

The data management system developed by CJP will revolutionize this situation.
They will monitor the voices of people in the field which have not been fully grasped by the automotive manufacturers and devise various plans. They will then test these plans in various locations throughout Japan. Toyota's President Akio Toyoda has always said "First try it." this is the business strategy that they will implement throughout the entire logistics business.
Based on the concept of "putting the customer first" and "putting the field first" Isuzu Hino Suzuki and Daihatsu will take the lead in standardizing their connected technologies which have been developed independently by each company.

With regard to electrification toward carbon neutrality, how will you promote the common use of electric components and vehicle bodies?
In this regard, Daihatsu President Okudaira explained that the company already has a track record of development in the EV CAS (EV CAS) and ZEV Factory.

EV CAS is the EV C.A. Spirit, a joint development company for EV-related technologies established mainly by Toyota, Denso and Mazda. The company has already been dissolved as it has achieved its original purpose. The ZEV Factory is Toyota's internal EV development division.
President Okudaira then said, Naturally, we will continue to collaborate with Suzuki on electrification technology, but we will be discussing the specifics in earnest from now on."
The other thing that caught our attention was the collaboration on mini passenger cars.
Suzuki's president, Suzuki, said, At this time we are collaborating on light commercial vehicles, but of course now we will also collaborate on mini passenger cars."

Reforms of the commercial vehicle business have immediately started under Toyota's leadership.
It is likely that a new corporate collaboration with Toyota at the core will be promoted, not only for commercial vehicles but also for passenger cars.