Articles for ITS market "Return to Origin" directed towards the age of change, automatic operation and connectivity

There are three areas of technology: automatic operation, connectivity, and EV. MaaS (Mobility as a Service) integrates and commercializes these technologies.
In response to these changes, automobile manufacturers are rapidly responding to next-generation technologies and services by re-organizing their corporate strategies.
Meanwhile, other automobile manufacturers are trying to return to their origins. It is a movement to recapture the essence of vehicles, which is considered the "Driving pleasure"
For example Toyota's sports car the "Supra" and Lexus's crossover "UX" have been introduced. We can see the emphasis on "driving fun" while incorporating connectivity technology in both vehicles.

For example the joint development with BMW (Germany), which is Toyota's first created the fifth-generation "Supra". 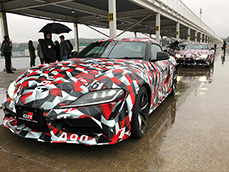 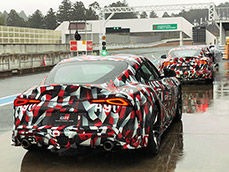 In early December 2018, the Sodegaura Forest Race Way (Sodegaura City, Chiba Prefecture) hosted three "Supra’s", which were camouflaged to hide their appearance.
In the 1980s Supra was created as a derivative model of the Celica, called Celica XX (double ex). The latest fifth generation model is Toyota's top sports car..
The official announcement of the fifth-generation Supra will be on the press day of the North American Automobile Show (Detroit, Mich.) on January 14, 2019.
At this time the final test vehicle for mass production, called "mass production prototype" (final prototype) was test-driven however currently Toyota does not disclose detailed vehicle data. The only thing known is the engine is an in-line 6-cylinder turbo engine and the transmission is an 8-speed automatic.
The main feature of the fifth-generation "Supra" is the joint development with BMW of Germany which is Toyota's first. Specifically the vehicle chassis and engine are shared with BMW's Z4 sports car. The production is carried out at the Magnastear plant, a major European parts manufacturer in Austria. In other words all of the fifth generation "Supra" with Japanese specifications will be imported.
Toyota's collaboration and development with other companies have produced sports cars like the successful 86 and Subaru BRZ vehicles . Toyota's core market for sports cars is continuing to rely on Toyota’s future vision. However, for sports cars where sales volume has not grown significantly, Toyota would like to keep R&D costs as low as possible. In addition we would like to make the most of our marketing activities and keep Toyota's sense of "car love" very active at Toyota.
Nevertheless, the fifth generation "Supra" does not seem to be a mere sibling of BMW "Z4". The overall engine has a clear "Toyota color" indicative of a "Supra" design. Since the road surface was rather wet during the circuit driving, the vehicle ran well on the straight road while pushing the vehicle characteristics in the corners maintaining a maximum speed of about 170 km/h. When the accelerator pedal was depressed in the corner the vehicle understeered but was well controlled by counter steering. Of course it is a rear wheel drive vehicle (FR vehicle) with an in-line six-cylinder engine which is the "Supra" historical design.
But it is not difficult to drive and is very controllable. The maximum output is estimated to be around 350 horsepower with a maximum torque estimated at around 500 Nm. However the atmosphere in which drivers handle the car is very enjoyable for drivers when maneuvering the car.
Technically the active differential mechanism, which controls the torque distribution to the left and right rear wheels from 0 to 100% provides neutral steering characteristics and stabilizes the overall vehicle motion.
In order to transmit and receive driving conditions and customer data from the OBE to and from the cloud a DCM (data communication device) is also mounted on the Supra. Therefore the Supra is an advanced sports car. The utilization of connectivity technology is inevitable on new models from Toyota. However in terms of "enjoying driving," the connectivity seems to be a backup technology for safe driving. 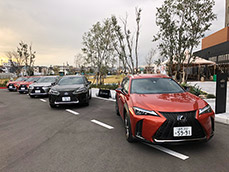 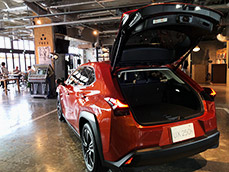 Explanation of UX vehicles is held at a fashionable restaurant in the Tokyo Bay Area. 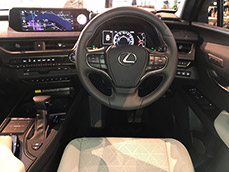 The week after the "Supra" test ride, he participated in the media test ride of Lexus "UX" from the Kawasaki port area in Kanagawa Prefecture as the starting point.
In March 2018 the UX was debuted worldwide at the Geneva Motor Show in Switzerland. The Lexus brand is a crossover entry model that followed the LX, RX, and NX.
The lineup of engines includes a series 4-cylinder 2.0-liter UX200 and a 2.0-liter hybrid UX250h. In addition to a front wheel drive vehicle (FF), it is also available in a four-wheel drive vehicle (AWD) that motorizes the rear wheels.
The product concept is Creative Urban Explorer. People who live in their 30s and 40s in urban areas and whose total annual income exceeds 10 million yen typically go to the sea or mountain on short weekend trip. With such an image, they went to the Boso region of Chiba Prefecture and the Hayama region of Kanagawa Prefecture for a test ride of about 150 km for each round trip.
The most surprising thing was the quality of the hybrid vehicle. By optimizing the motor drive and the control of the engine both excellent and even acceleration is achieved without any extreme feeling of engine torque. The vehicle body, using advanced welding technology easily controls the power and torque.
As a result, driving on both highways and secondary roads is very pleasant and quick.
The interior is full of design cues that incorporate Japanese taste and the latest equipment is linked with connectivity technology. Again however the connectivity technology seemed to be a backup technology for driving enjoyment.

Does the "ownership to sharing" focus on low-to medium-priced vehicles?

Currently I have been able to test Toyota's "Supra" and Lexus's "UX" and feel more connected to the driving experience once again.
Do you think the desire to own cars will be reduced in the future?
Many consultant-related companies expect to further develop the sharing economy and move from "ownership" to "sharing" of cars in the future through technological fields development such as automatic operation, connectivity, and EV.
Such trends seem to be now centered on low-to medium-priced cars, with less "continuing ownership" in senior sports cars and premium brands.
On the other hand, European manufacturers such as Mercedes and Audi have proposed not to own luxury cars, for example by commercializing new cars with monthly flat payments.
How will we move from ownership to sharing?
By closely monitoring the current market trends.