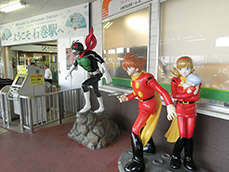 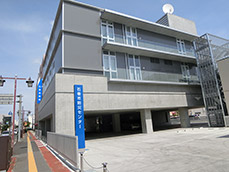 The symposium was held at the disaster prevention center adjacent to Ishinomaki City Hall.

I arrived at Ishinomaki station about one hour from Sendai station by JR Senseki line. There are art works including, “Kamen Rider” and “Cyborg 009” in front of the station. Many cartoon characters including famous cartoon character “Robocon” are painted on the wall in the station building. In Ishinomaki City, “Basic concept of Manga Land” describing the town development is drew up with the assistance of the late Japanese manga artist Mr. Shotaro Ishinomori who was born in Miyagi Prefecture. I walked around the city, some old buildings still remain in the center of Ishinomaki City. I saw a notice on a telephone pole, it said that a tsunami reached a height of 70 cm. Meanwhile newly constructed buildings such as the Chamber of Commerce and Shinkin Bank are prominently located in vicinity of the estuary of the former Kitakami River about a 10 minute walk from Ishinomaki station. Seven years have passed since the Great East Japan Earthquake, and I have the impression that the city of Ishinomaki is definitely following a path to revival.

My reason for visiting Ishinomaki currently is to participate in the 2nd Community Car-share symposium. In Ishinomaki City, car-share which is led by local residents is under way. About seven years ago, approx. 60 thousand vehicles were damaged by the earthquake and subsequent tsunami rendering them inoperable. During the reconstruction the Japanese government started livelihood support including temporary housing, however transportation capabilities were limited making residents daily life difficult. Because of this limited vehicle access residents started "Community Car-share" where residents themselves created and managed their own rules. These attempts have also been made in Europe but the Ishinomaki City program has gotten worldwide attention because of its importance to the recovery from the large-scale disaster. 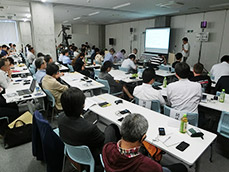 Approximately 100 people participated in the symposium. 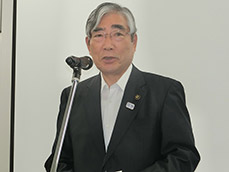 Following the 1st Community Car-share symposium in 2016 the Belgian car sharing management association took the podium at the symposium to discuss the future of "Community Car-share". Mr. Hiroshi Kameyama the mayor of Ishinomaki City and officials from the reconstruction agency also gave a speech. After that examples from Belgium and Germany were introduced. In addition there was an explanation from the Japan Car Sharing Association which is actively promoting actual situations and operation of the community car-share in Ishinomaki City. After lunch a speaker who was born in Ishinomaki City and who is a member of the Traffic Laboratory at the TU Wien in Austria gave a presentation. Also a speaker who is a member of Nagaoka University of Technology in Nagano Prefecture and who studied regional public transport gave a presentation. Among them it was interesting to note that there are various methods for car-share. Not only business models by major business operators, but also the fact that residents from various parts of the world are involved in voluntary activities.

Regarding car-share in Japan, car-share using the same parking lot for both the start and end point is managed by major parking lot operators Park 24 (Times) and Mitsui Fudosan Realty (Mitsui repack) and have become popular. Such programs are called a station type (round-trip) type. In the station type there is also a (one way) option which may be returned in a parking lot different from the borrowed parking lot. The Park 24 utilizes the station type using Toyota's compact EV and conducts the one-way type verification test in Tokyo.

Also there is a home zone type which is round-trip system and does not have a specific station. A given area may be considered as a zone and if vehicle remains in the zone it may be returned at a different location from the original location. This has been put to practical use in Paris, France. In addition there is also a free floating type which can borrow one way from anywhere and return it anywhere. In recent years bicycle-share spread rapidly in urban areas and is applicable in locations including Shanghai and Beijing, China.

Will “Community Car-share” become more popular in the future? 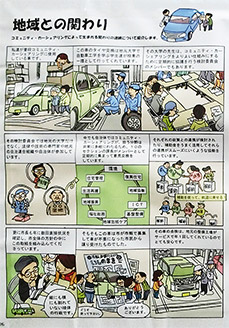 A comic to explain about “Community Car-share” (1/2) 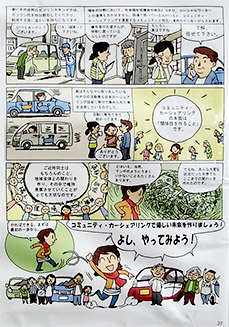 A comic to explain about “Community Car-share” (2/2) 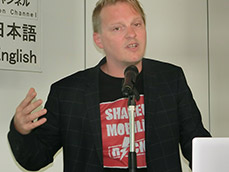 Speaker: Mr. Jeffrey Matisse who is president of Autodelen.net in Belgium.

While car-share which is mainly driven by business operators, local resident voluntarily car-share is generally called "community car-share. As of May 2018 there are 205 members in a total of seven places in Ishinomaki City. The average age is 73 years old with the aging continuing to progress. In addition the ratio use between male and female is 3:7 with women prevailing. This is because many elderly women do not possess a driver’s license. Regarding the provisioning of vehicle donation from each side is the main concern. Among them IDOM which operates Gulliver second-hand car sales has donated more than 30 units since 2011.

The contents of car-share are utilized not only for things including shopping and hospitals, but also for small excursions to neighborhoods. The purpose is to create a supportive community. As for driving it is not limited only to the user, there are also other driver methods like a volunteer driver. The usage fee is 500 yen per 5 km however this is actual expense. It is regularly checked and considers usage situation, income and expenditure by the members and all will bear the expense of actual costs at an equal ratio. The Road Transport Law transportation act typically prohibits the receiving of compensation and vehicle lending however the "Community Car-share" program is exempt and is legal. As a special measure of the Road Transport Law in Japan there is a provision for a paid passenger carrier used for private use which also operates in difficult traffic areas such as inter-mountainous areas, and is used for individual welfare. "Community Car-share" is a different way of thinking from such special circumstances and basically there is no obligation to notify the local municipality.

Belgian officials who gave a presentation this time introduced in detail the case where "Community Car-share" is conducted mainly by local residents in the same country. For example, they are "Cozycar" and "Degage" where local residents voluntarily share cars. However since various legal interpretations similar to Japan’s Road Transport Law are different it is difficult to use management methods similar to Japan.

With the emergence of sharing economics for houses and automobiles globally, how will the "Community Car-share" evolve in Japan in future? I will continue studying these programs.