A series of automobile production reductions

Since the end of 2020, reports with the title "Production cut due to semiconductor supply shortage" have become more and more common.
The term "semiconductor" may conjure up images of the IT industry in many people's minds, but this time it is the automobile industry that is facing production cuts.

Automobiles are made up of tens of thousands of parts, and one group of them is called actuators. For example, there are fuel injectors for the engine, automatic transmissions, power windows, and satellite positioning systems such as car navigation. There are about 20 to 30 microcomputers installed, even in inexpensive vehicles and nearly 100 in a luxury car. The microcomputers are interconnected by an on-board communication network called CAN (Controller Area Network).
The internal structure of those microcomputers consists of CPUs, RAMs and Flash memories in a single IC (Integrated Circuit), so a shortage of semiconductor supplies has a great impact on automobile industry.

So why did the shortage of semiconductor supply occur at this particular time?
Some media reports stated it was because of increased demand not directly related to the automotive industry Instead it is related to the growing demand for e.g. base stations of 5G networks.
However, when we actually talked to automakers, we found out that the cause was quite simple, how their purchasing operation (supply chain) works.
It was Toyota who answered this question. 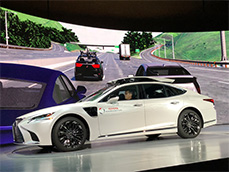 A Level 4 autonomous driving test vehicle being researched and developed by TRI (Toyota Research Institute). As a showcase for CASE, there may be new proposals for on-board semiconductors as well.

Toyota's system to be “unaffected”

At Toyota’s online financial results briefing for the third quarter of this fiscal year, the press naturally raised questions about the impact of the semiconductor shortage on production.
In response, the executive officer in charge of accounting assured that there would be no particular impact.
This statement was quite a surprise to the press, as well as to others in the automotive industry, with the exception of Toyota.
While almost all automakers are experiencing the semiconductor shortage on their production, Toyota, who has returned to the top in vehicle production terms in the world by 2020 (calendar year), said that they were not affected.

Why is Toyota the only one "not affected"?
Toyota's executive officer in charge of accounting gave a perfectly simple answer.
"Because we have been communicating closely with parts suppliers on a regular basis. He added, "We have a system in which the Toyota head office (purchasing department) communicates directly and regularly not only with Tier 1, but also with Tier 2, Tier 3 and Tier 4.
"In some cases, we call tier 1 and other tiers more than 10 times a day."

This is the reason why Toyota managed to avoid the semiconductor shortage due to its unique production system, "Just-in-time", a meticulous and comprehensive management of all processes from purchasing to parts delivery.
By the way, in the case of Nissan, who announced its financial results the day before Toyota's, the Chief Operating Officer (COO) stated, "Based on the general purchasing cycle, we expect the shortage of semiconductor supplies to be resolved around May 2021. 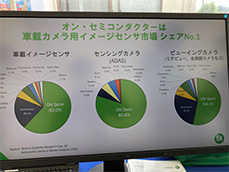 The image sensor used by Subaru for its next-generation EyeSight is made by US-based ON Semiconductor Corporation. Market share of the semiconductor business for image recognition. 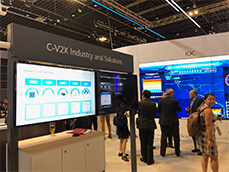 In various communication fields such as vehicle-to-vehicle (V2V) and vehicle-to-infrastructure (V2I), semiconductor manufacturers are expanding their horizons into the field of data services. The exhibit corner at the ITS World Congress held in Singapore.

Will the supply chain really change?

Considering the direct cause of the recent shortage of semiconductor supplies to the automotive industry included the difficulty in predicting component procurement due to the rapid decline and subsequent, upcoming recovery in automobile sales caused by the COVID19.
On a global scale, China was the first country to see the change in the market. Although the urban lockdowns across China caused a significant drop in sales in the first quarter, the second quarter saw an early and significant increase.

In the U.S., which has the largest number of coronavirus cases in the world, sales began to show a gradual recovery late in the second quarter. In Europe, the speed of recovery is lower than in China and the U.S., but the upward recovery trend is clear.
Meanwhile, in Japan, even under the emergency declaration of the first wave of coronavirus, Toyota's sales declined only about 60% from the same month of the previous year. From the beginning of autumn, sales have continued to surpass the same month last year.
These sales conditions, which differed greatly from one region to another, created production plan difficulties in each country and for export. Against this background, the Toyota style management, which consists of sales forecasts, production adjustments, and parts purchasing strategies, perform perfectly.

The first trend is to significantly reduce the number of on-board microcontrollers. As Bosch, a Germany automotive component manufacturer advocates a shift to centralized on-board control systems in the future, including support for server security.
Secondly, there is feedback from CASE (Connected, Automated, Shared and Service, Electric) and MaaS (Mobility as a Service), semiconductor companies like Intel, Mobileye (an Israeli venture under Intel) and NVIDIA (a U.S. company making GPU). They are stating that "the business we should focus on from now is not the sale of hardware and software, but the construction of infrastructure businesses that analyze aggregated data and provide new service platforms.

Of course, these "innovative data businesses" are not the same concept that Toyota mentioned as "people’s connections" to "make more than 10 calls a day to Tier 1 and Tier 2 companies to synchronize production status". This is a different approach.
Nevertheless, it is obvious that the semiconductor supply shortage problem has unexpectedly exposed the obsolete form of supply chain management in the automotive industry.