The trend is towards "coupe-type crossover" and good compatibility with connected cars. 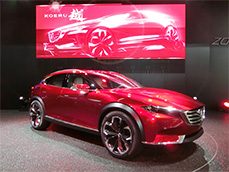 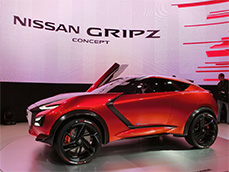 I thoroughly covered the world's largest Frankfurt Motor Show held in mid September 2015. The major European Motor Shows are held in Geneva, Switzerland in March every year and in Paris and Frankfurt in during September every two years. Naturally there is a large number of the first public exhibitions by local German manufacturers at the Frankfurt Motor Show. Recently the hot topics in automotive are the automated driving system and FCV (Fuel Cell Vehicle) in Japan while in Germany I realized this was not the trend.

The car which received the most attention was the "coupe-type crossover" "F-PACE" as the production vehicle. The Mazda "KOERU" and Nissan "Gripz" as concept models premiered for mass production have caught everyone’s eyes. It is very difficult for car manufacturers to create the image of high-value-added products from the existing classic body shape such as sedan, coupe, super sport car and pickup trucks. That is why a new category "crossover" was born in the 2000s and it is a fusion of sedan and SUV (Infiniti "FX" as an example). Furthermore a subdivision started as a "crossover" and one of them made coupe-type sedan morph into a which leads to a concept emphasizing bold facade design even though this requires downsizing the rear seat space.

"Coupe-type crossover" has not only advanced the image, but also has a good marketability and compatibility with the connected car. Specifically the diversification of display data by increasing the size of HMI (Human Machine Interface) and HUD (Heads-Up Display). The evolution of cooperation between the in-vehicle devices, smartphones and new services using precise map data and probe data are being introduced. In addition as a trend of the power train system there were many PHEV (Plug-In Hybrid Electric Vehicle) and EV (Electric Vehicle) presented for mass production in order to meet the strengthened European CO2 regulations in 2021. Audi and Porsche announced an EV and gathered much attention from media. 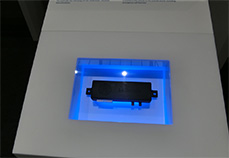 Bosch's device for the services such as eCall 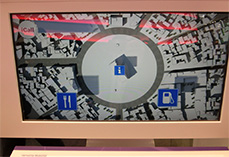 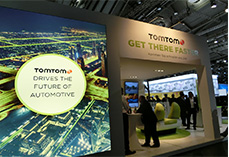 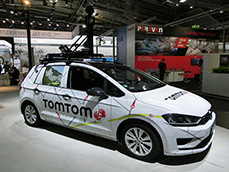 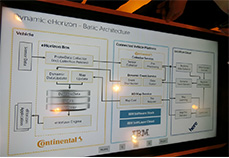 "eHorizon", the system utilizing the big data provided in collaboration with Continental, HERE and IBM

On the other hand, what the car manufacturers paid most attention to at the Frankfurt show was a "shift to the IT industry" by Continental and Bosch the leading parts suppliers in Germany. The basic technology of automotive parts has been geared toward improving the safety of "run/turn/stop" functions. Based on that it has been gradually shifting from mechanical parts to electronic components for over 10 years. The sensor technologies such as camera, radar and laser have been developed through exterior sensing of the vehicle for collision safety and collision prevention. This is part of the ADAS (Advanced Driver Assistance Systems). In Europe it has been decided to enact the standards for pedestrian protection by the European Commission (EC) in 2016. They have already started consultations to incorporate the provisions relating to night pedestrian protection in 2018. Bosch and Continental are accelerating their technology development related to the communication between pedestrians and vehicles. This requires higher accuracy as well as V2V (Vehicle-to-Vehicle communication) by laser and V2I (Vehicle-to-Infrastructure communication) by DSRC (Dedicated Short Range Communications). Overall, it can be said that the concept of V2X (Vehicle-to-X communication) will continue to further evolve.

One other technology being developed in the European market is the eCall, system to call emergency service automatically through the use of satellite positioning system (GNSS: global navigation satellite systems) when an accident occurs. In Russia they have already begun to introduce the ERA-GLONASS using Russian GNSS “GLONASS” in new cars. In Europe, introduction of eCall is behind schedule. It was supposed to be mandated for new cars sold from 2014 but was delayed due to satellite launching schedules of Galileo (GNSS operated by EC). However, the business related to this field is expected to expand because full-scale operation of eCall in Europe is forthcoming and we already see Bosch has introduced the receiver supporting eCall this time.

In addition to mechanical, electronic and satellite systems mentioned above Bosch and Continental emphasize the big data business which is utilizing the cloud services. It is called "Connected Horizon" at Bosch and "eHorizon" at Continental. Both companies use IBM as the back-end cloud services. As a feature layer Bosch has adopted TomTom (Holland) and Continental has adopted HERE (Germany) for precise digital map data.

This builds the foundation required for data analysis, position overlay of vehicles from GNSS, probe data containing traveling history and the real-time running conditions derived from in-vehicle devices and smartphones. By utilizing such data, car manufacturers will be able to fully understand the usage conditions of their products. They will be able to communicate directly with customers by sending useful data corresponding to the behavioral patterns, businesses and hobbies of each customer with optimum timing.

Because of the rapid development of smartphone and cloud service, the automotive industry recognizes that the element of "connectivity" will become an additional function of the cars "run/turn/stop". In to such situations the leading parts manufacturers in Germany are trying to shift to the "connective IT industry" quickly. If there are no Japanese manufacturers who are able to compete against such trends, the “connective IT industry” in Germany would become the "de facto industry standard.