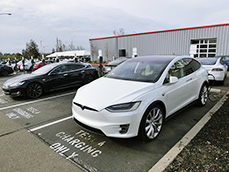 Tesla's factory. The starting point of test-riding. Also the new model of their SUV, ”Model X” were exhibited there. 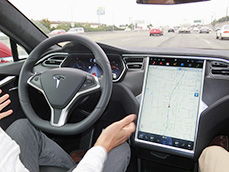 Experiencing the autonomous changing lane in Tesla ”Model S” on the Interstate 880, California. 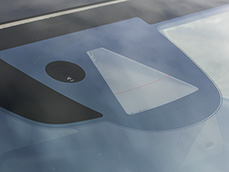 Mobileye's monocular camera supplied to Tesla. The image recognition technology is embedded in it.

Recently Tesla's autonomous driving is the hot topic in Japan because it can change lanes automatically and the Japanese government has approved it to run on public roads in Japan. Before the Japanese government approved it Tesla held an autonomous driving test-riding event for the Japanese media demonstrating the lane changing feature. The starting point of test-riding was Tesla's factory in Fremont, California which is located south of San Francisco, just north of San Jose in the Bay Area. This factory used to be a joint venture of TOYOTA and GM, it was established in 1980s and manufactured the COROLLA for North America. Subsequently Tesla acquired it as their manufacturing base.

The test-riding course was on Interstate 880 in front of Tesla's factory gate. The test-riding was held running at the maximum speed limit which is 65 miles/h. The operation of changing lane occurs when the driver pulls the short lever on the left of steering, the car initiates the autonomous lane changing sequence by booting up the cruise control and pacing the vehicle directly in front. When the driver activates the signal lever, the car reviews all surrounding situations and if safe changes the lane automatically. After the lane change, a driver needs to disengage the signal lever manually. The test-riding continued on Interstate 880 and the car was driven twice for 30 minutes each time. I experienced the test-riding myself and feel that it was at the same level of a skilled human driver.

The reason why the simple autonomous driving and automatic lane changing became possible is because of the development of image recognition technology. Mobileye, an Israel image recognition development company is supplying the basic technology to Tesla. The basic technology includes analyzing the images taken by a monocular camera with their own algorithm and producing the “Big Data” needed for the program. Mobileye designs the dedicated semiconductors for the image recognition using SoC (System on Chip). This kind of technology is being adopted by large automotive manufacturers like GM, Volkswagen, Volvo and Nissan for ADAS (Advanced Driver Assistance System) which automatically brakes to avoid or mitigate a collision. Nissan adopted and uses Mobileye's technology in their Electric Vehicle, LEAF.

Mobileye are GM working together in the Probe Data business. Reference : GM 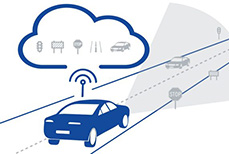 Now we will move onto the main subject.
Mobileye and GM is starting a new business. They will use “OnStar”, GM's in-vehicle data service system. OnStar analyzes images of the surrounding situations using the “cloud” and collects Big Data from the traveling vehicle. This method of analyzing the traveling vehicle data, is called the “Probe Data Method”. Japan has been leading the world in car navigation system market. This includes mass production of car navigation, TOYOTA, HONDA and NISSAN. They are the three biggest Japanese manufacturers and they have been building their business models using their own Probe Data. The main information of their models include “positioning information” based on the GNSS (Global navigation satellite system) data. Their models also use many kinds of GNSS data like car's position, direction and velocity to show traffic jam information on a monitor allowing for route search modification.

On the other hand in Mobileye's and GM's case the data accuracy is obviously higher than “positioning information” only. This is because Mobileye and GM use actual image data which is provided from the cameras to make the Probe Data. This data information is not too large, about 10kb per 1km driving. This is why the load on communication devices is smaller. “Here” the German map information company which was acquired by Daimler, BMW and Volkswagen jointly in December 2015 is also doing the probe data business related automotive. The 3D map data “Here” makes uses LiDAR (Light Detection And Ranging) but is much larger than Mobileye's image data. The difference is in the order of a digit per kilometer.
Originally Mobileye and Here used to be Tier 2's in the automotive industry, but now are leaders in the new Probe Data business field. Now they are in a position to discuss the future's technology and innovation with automotive manufacturers. In the near future, the “new stakeholders” may appear, one by one from the Western countries.