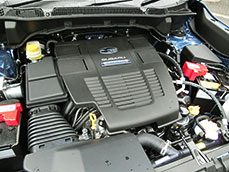 A new type Forester has been released in June of this year. There are two types of engines in the domestic market. One is 2.5L boxer engine. The other is a hybrid system which is consist of 2.0L boxer engine and electric motor.

Awesome EyeSight, I still admire it 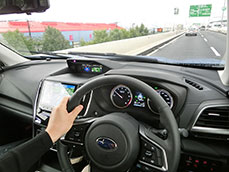 I want to explain step by step how the STEP of the new Forester actually felt. First, the SGP of the new car body is complemented by a flat and comfortable ride. SGP was adopted in the Impreza and XV released in 2017 and has earned high praise from users and the media. In the Forester case which has a higher ride height than the other two models, the merit of SGP can be experienced more completely. This is because it can fully demonstrate the suspension abilities due to larger momentum of the highly rigid car body.
Next, regarding the Touring Assist functions. I was surprised again by the high performance of EyeSight. The Touring Assist performs image recognition using two cameras called stereo cameras installed in the car. It is a technique familiar with the television commercial "Car without bumps".

talled in the car. It is a technique familiar with the television commercial "Car without bumps".
In the new Forester the performance of steering correction during traffic jams is increased. The steering correction is actually automatic steering. The stereo cameras detect the white line on the road surface and its surroundings and corrects the steering so the vehicle continues traveling in center of the lane. There are similar systems such as Nissan's "Automatic Driving Technique on the Same Lane", Honda's “Honda Sense” and Toyota's “Toyota Safety Sense”. Each car manufacturer is mass-producing and using their own proprietary technology.

Among the advanced driver-assistance systems, “Touring Assist” which is the latest version of EyeSight is the most impressive because it provides users with technology that is ahead of the other companies. The amount of steering correction can be quite large, but the Forester will never supersede the driver input movements. There is an distinct development philosophy that emphasizes driving pleasure.
The high performance functions of “Touring Assist” cannot be fully conveyed to the readers through just this article. Readers should go out to drive and experience it for themselves to truly understand the capabilities.
As previously noted the STEP “E” is a hybrid vehicle. You can change the strength of the electric motor's operation with a simple switch on the steering. Even when you select the most aggressive motor setting and depress the accelerator from a stopped state, it is powerful but never has an aggressive feeling so you can enjoy a comfortable acceleration. 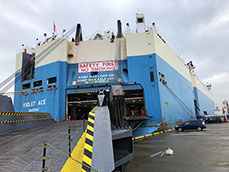 Car carrier which anchors at Kawasaki coastal harbor. The owner is a Greek company. MOL operates the car carrier. The destination is Vancouver, Washington State and scheduled for a 13 day operation. 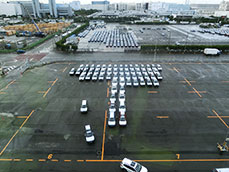 About 1,300 vehicles were loaded from Kawasaki this time. View of the port side from the car carrier. 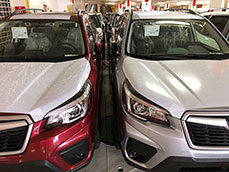 The distance between the vehicles is set to 10 cm on the left and right. 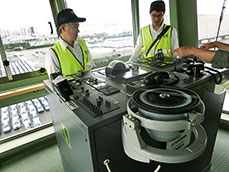 Employee of MOL guides tour inside the car carrier. In front of the starboard operating system. 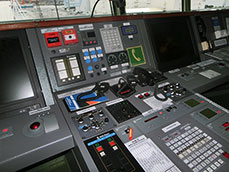 Equipment in the center of the navigation room. 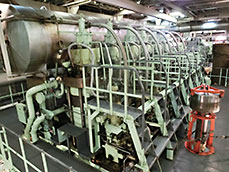 In recent years Subaru performed well in overseas sales, mainly in the United States. The Forester sold about 280,000 units worldwide in 2017 with about 180,000 units sold in the US market. This is about nine times higher than the Japanese market.

For the US market Impreza switched from domestic (Japan) production to a Indiana production plant in the US, however all Forester production is still in Japan and then exported.
The transportation route is from Ota City's factory in Gunma prefecture to Kawasaki by truck and then transport to the US by car carrier.
During this tour about 1,300 cars including Forester, BRZ, etc. were loaded onto the car carrier. The car carrier is named "ORCA ACE" of MOL’s FLEXIE series which began service in 2011. The size is 199.9 m in length × 32.2 m in width × 50.0 m in height. The width of the car carrier corresponds to "Panamax" which is the maximum size for operating in the Panama Canal. The Panama Canal has been renovated and it is also possible to operate even larger vessels.
Gross tonnage is 49,708 tons. For small cars the maximum load capacity is about 5000 cars. There are 11 layers of decks.

The workers drive a car to the car carrier for car loading. Approximately 20 workers including supervisors, drivers (5 to 7 workers) and a worker who secures the car to the deck, work as a group. This group is commonly called a gang. One gang can load about 80 cars an hour. In this instance the car carrier had three gangs working.

Workers drive inside of the car carrier, selects reverse and then park. After turning steering wheel once the worker parks without any further steering corrections. The distance between the vehicles are set to 10 cm on the left and right and 30 cm at the front and rear.
After taking a tour of the engine room I received more information from the captain in the steering room and also found that they use digitized charts.
This car carrier leaves Kawasaki on September 14th, 2018 and operates at an average speed of about 18 knots (about 33 kilometers per hour) The plan is to arrive at Vancouver, Washington State, USA on September 27th, 2018. It is a 13 day voyage.