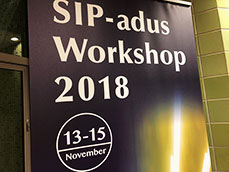 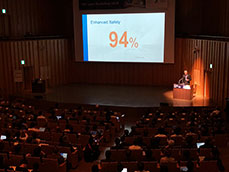 In mid-November, 2018 many governments, local governments, companies, and academic people involved in automated driving from all over the world gathered in Odaiba, Tokyo, Japan.
Everyone gathered to discuss the national SIP (Cross-ministerial Strategic Innovation Promotion Program) project which related ministries and agencies in Japan worked together on regarding the next generation of technology development. The project relates to automated automobile driving is available as along with healthcare and chemistry. As part of the project, workshops are held in Tokyo every year.
SIP is held for a 5 year period with this year being the final year of the first phase. In the automated driving workshop, a comprehensive discussion was held on various verification tests and mass production projects. This included various automated driving that has been conducted in various parts of the world over the past 5 years.
For Japan, during the Tokyo Olympics and Paralympic Games in 2020, a large-scale plan that is considered a showcase for the next-generation automated driving in the Tokyo bay area, mainly in Odaiba will be implemented. This will be implemented as part of the second phase of SIP, called post SIP.
In the past five years I have covered the SIP workshop every year. I communicated with government officials in England and Sweden that I met throughout the years, while covered the field of automated driving demonstration tests for both countries.
In this workshop, which was the 1st SIP Final Year, we deepened friendships with the stakeholders and discussed full-scale operation of automated driving in various parts of the world. 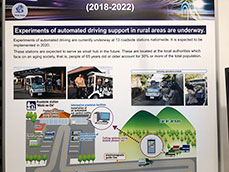 Explanation of experiments of automated driving in rural areas conducted in Japan. 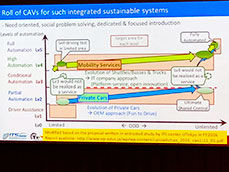 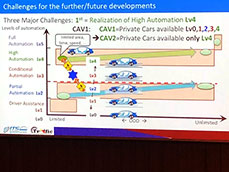 Among those discussions, the most important issue was interpretation of ODD.
“ODD” is an abbreviation for Operational Design Domain. It is a condition for automated driving function. For example when referring to an entire area including city centers, regional cities, mountainous areas, etc., and also refers to road conditions such as highways and narrow streets of the city. There are various Japanese translations, but it is often called “operation design area”.
The foundation of the idea of ODD was established in September 2016 when the Society of Automotive Engineers in US (SAE) and the National Highway Traffic Safety Association (NHTSA) unified the guidelines for automated driving levels.
Among the automated driving levels, Level 3 is the point where interpretation of ODD is particularly necessary. At level 3, responsibility for driving is shifted from vehicle driver up to level 2 of the vehicle system. However, unlike full automated driving at level 3 or higher, level 3 may also be driven by the driver depending on the situation. Specifically, when the driver becomes drowsy while traveling on a highway. The driver would press the automated driving changeover button to switch to the automated driving mode. However, if an accident occurs during the automated driving the traffic control police officer will switch off all automated driving in the area and the vehicle system cannot continue automated driving, instructing the driver to take control of the vehicle.
These ODD corresponding conditions such as accidents, etc. are pre-programmed in advance. Because so many different conditions are possible, it is extremely difficult to deal with all driving situations at level 3. Therefore traveling at level 3 is only possible in limited driving conditions when using ODD.
Another new way of thinking regarding private car driving was devised by SIP and introduced in this workshop. According to the conventional way of thinking, private cars correspond to level 0 to level 2, which is manual driving and considered ODD for level 3. On the other hand level 4 and 5 are targeted for mobility services such as public transportation.
In addition to these ideas the level of automated driving functions for private cars is gradually upgraded and raise from level 0 to level 4. There are also private cars being developed that will correspond to Level 4 when produced. In short the level of automated driving is still in the early stages. Advancements for automated driving vehicle mass-production continue grow. Private automated driving vehicles and mobility services demand may increase which would possibly lead to dramatic changes in the international discussions. 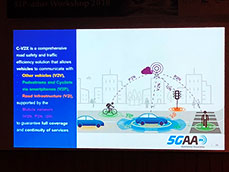 Conceptual Diagram for 5G Practical Use 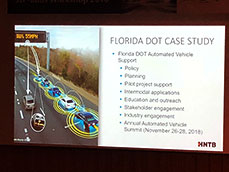 Conceptual Diagram for V2V in Florida, US

In parallel with the discussion on the automated driving level, the attention of SIP workshop participants was also high about the fifth generation communication system (5G).
Because of the extreme increase of the 5G communication speed and data amount, the time delay of exchanging data between the communication devices is reduced. It is expected that conveniences such as communication between vehicles (V2V) and communication between a vehicle and a smartphone carried by pedestrians (V2P), which is important for automated driving safety will also increase.
The lecture by the US Department of Transportation (DOT) touched on the relationship between 5 G and automated driving as shown in the demonstration case of V2V in Florida (USA).
Also in Japan the second phase of SIP, a verification test on V2X, which is a collective term for communication between vehicles utilizing 5G and outside is planned.
However, concerning the contents of such a verification test there is concern there were no specific remarks from the country or the automobile manufacturer.
The first phase of the SIP automated driving project will end on March 31, 2020. The summer of 2020 where the Tokyo Olympic Games and the Paralympic Games are being held is the second phase of SIP. Based on the results of the first phase of SIP we strongly hope that the roadmap of SIP 2 will be released domestically and overseas as soon as possible.