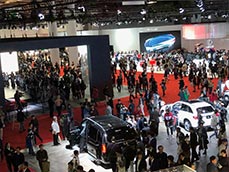 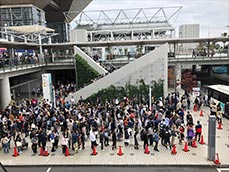 A long line waiting for a free bus connecting the venues.

Free access to some venues against increases the number of visitors

The 46th Tokyo Motor Show (October 24 to November 4, 2019) has ended.
The number of visitors registered before the event reached 1.3 million, far exceeding the organizers goal of 1 million. This almost double the 770,000 people at the previous show two years ago.

Why has it recovered so well?
The main reason is that admission is free at some of the venues.
So why did organizers set up free venues?
There are two main reasons.

One is the response to decentralized venues. The Tokyo Big Sight East Building, which was the main venue until this show, was not available because it was renovated as the 2020 Tokyo Olympics and Paralympics Media Center. The show venues in the Odaiba area were largely divided into four locations. The four venues were connected by “Yurikamome”, an automated railway, and also free shuttle buses. They assumed that the number of visitors would be reduced due to the transportation difficulties Therefore they incentivized customers by making admission free at some venues.

Another major reason is that there were concerns about the decline in the overall motor show status and the lower visitor attendance due to a significant decrease of exhibiting automakers.
Although all Japanese automakers exhibited in Japan because the show is held in Japan, overseas manufacturers only included Daimler and Renault. Last time, super car makers including Ferrari and Lamborghini were also not exhibited. This time, the organizers of the show were greatly shocked by the withdrawal of Volkswagen, Audi, BMW, Volvo, etc., all of which are sold in Japan.

The tendency of these non-domestic automakers to stop participating in the motor show also happening at the Paris Show in France last year, the Detroit Show in America this year, and the Frankfurt Show in Germany. Therefore, the cause of the problem is not related to only the Tokyo show. In other words, the Tokyo Motor Show further proves the conventional motor show business model is no longer valid worldwide.

From a business perspective as an organizer this likely caused a significant drop in revenue for this show.
The show organizer has not released a breakdown of paid and free admissions for the 1.3 million visitors. In addition, it seems that automakers and auto parts makers were giving away many free invitation tickets. Therefore, even if the number of visitors doubled compared to the previous show, it is obvious the entrance fee revenue was flat or decreased. In addition, there is no doubt that the exhibition fees, which are the main revenue from the show, has also declined significantly as major overseas manufacturers withdrew. 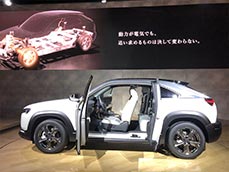 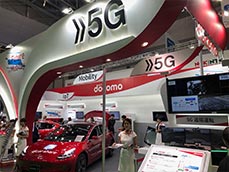 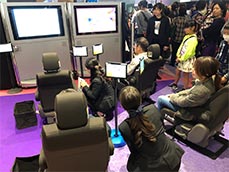 Various free attractions such as VR (virtual reality) are available.

There are fewer exhibitors with impact

It is obvious the Tokyo Motor Show was forced to be held with various negative factors. Regarding the contents of the exhibition, it is hard to say if the level was satisfactory for visitors.

At the booths of Japanese automakers, EV (electric car) exhibitions stood out. Mazda unveiled the SUV “MX-30” and Honda unveiled the mass-produced compact car “e”.
However, both models are not actively selling in Japan. Mazda and Honda explained that their main customers are in China, which has a law on the number of EVs sold in country. And also Europe, where CO2 regulations will become increasingly severe in the future. Hearing such stories, awaken me as a Japanese.
In Japan, with the launch of Nissan "Leaf" and Mitsubishi "i-MiEV" in 2010, the development of charging infrastructure has progressed in various parts of the country. However EV sales have not increased significantly. Even though the Japanese people no longer consider EV’s as a special car, there are still many cases where EV purchases are not considered. This is due to the convenience of gasoline cars and the balance between new car prices and trade-in prices.

Automakers are aware that the demand for EVs in Japan will not increase unless EV sales are required by law. Based on this the Tokyo Motor Show is being used as a focal point to transmit Japan's EV technology to the world.
As expected exhibits related to automated driving were also reduced. The reasoning is that the introduction of automated driving at level 3 to society has led to a common understanding that countries around the world and automakers "will take more time to become a business". Although image recognition technology has been steadily evolving and development of laws at the United Nations is progressing, the entire automobile industry has recognized that there are still big social acceptance hurdles.

There were no exhibitors showing the connected car service utilizing 5G (5th generation) communication. This is scheduled to be put into everyday use in the first half of the 2020. NTT DOCOMO has introduced “D Car Sharing” between individuals, but it seems that there were not many people entering the booth. After all, at the motor show it is “car-centric” and therefore difficult to appeal to users for a “service-centric” business model.
In addition, “Future Expo” in the free area introduced drones, VR (virtual reality), and merchandise sales using face recognition. However, I didn't think it was a clear relationship of the current connection with the car.
The motor show has obviously reached a major turning point. I feel strongly that it is essential to create a new business model in order to continue and grow the Tokyo Motor Show.