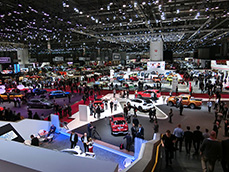 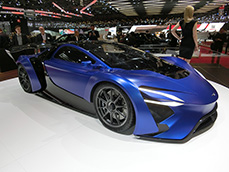 “AT96” by the Chinese supercar manufacturer "Tech Rules"

The main attractions of the Geneva Motor Show are flashy and brilliant supercars. Where are the supercars from? Many are from Torino, Italy. Torino is located at southeast of Geneva and on opposite side of the Swiss Alps. It takes six hours highway driving by car from Geneva. There are many big CDS (Car Design Studios) called “Carrozzeria” there. For example, “Pininfarina” working with Ferrari, “Italdesign” is affiliated with Volkswagen, and "Bertone" launched some of the finest cars such as “Miura”"Countach" with Lamborghini. These “Carrozzeria” studios decorate their booths with the latest concept models.

Recently there has been an increase in the exhibitions of supercars made in England. Because the popularity of Formula 1 and other motor racing sports are declining some companies like McLaren and other high-precision parts suppliers are looking to the supercar business to strengthen their sales.

In addition this year the Chinese supercar manufacturer "Tech Rules" unveiled their product for the first time to the world and became a huge topic of conversation. Tech Rules is manufacturing a 4WD, EV (electric vehicle) supercar using a jet engine with a maximum output of more than 1000 horsepower. According to the president of Tech Rules they only manufacture the jet engine in China, the vehicle bodies and the final assembly will be carried out by the parts supplier in United Kingdom.

Lots of Eco-cars appeared in anticipation of 2021. 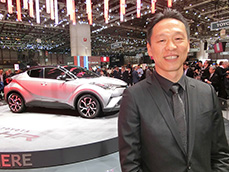 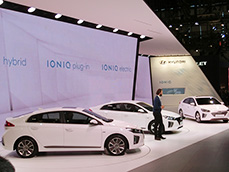 In the Japanese manufacturers Toyota unveiled a new SUV "C-HR" hybrid crossover. They have also improved the power train and body of the fourth-generation "Prius". Lexus announced "LC", their finest hybrid model coupe which will be appeared in 2017. It has a new system called “multi-stage hybrid system” with two integrated motors and four-speed automatic transmission.
Hyundai of South Korea attracted a lot of attention with their first worldwide attempt. They showed their full line-up of “IONIQ” cars including a hybrid car, plug-in hybrid car and EV (electric car) in the same vehicle body style.

Let me digress a bit and talk about a little incident that happened at Volkswagen’s booth. During a press conference of their small car "up!" a suspicious man wearing work overalls came up onto the stage suddenly and tried to get under the "up!". He was immediately caught by guards but when he was pulled down from the stage, he was grinning and said “this car should be repaired, too” and had a board saying “CHEAT BOX” in his hands. He is a British comedian and in the past has scattered play money in the FIFA’s press conference as sarcasm for the FIFA’s bribery issue in July of last year.

EU’s criteria for the pedestrian protection starts in 2016 and would be mandatory to support the protection of pedestrians at night from 2018. 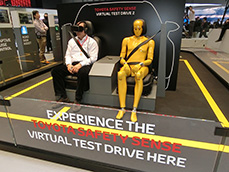 TOYOTA’s booth. It is a VR (virtual reality) pedestrian protection demonstration where an individual can experience the collision safety brake system. 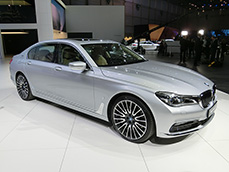 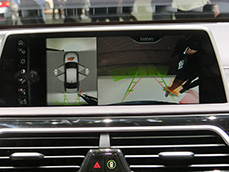 A new display from BMW to demonstrate the pedestrian protection system.

The exhibitions in the Geneva show were mainly super cars and eco-cars, but the car manufacturer’s attention was directed at Safety Performance Evaluation Criteria for the pedestrian protection which starts in 2016 by EU NCAP. EU NCAP is a de facto mandatory requirement, so the car manufacturers need to join it. It is very important for them to win the five-star rating for the best public relations of their products.

This is why TOYOTA exhibited with a large booth that included a VR (virtual reality) experience for their collision safety brake system. BMW exhibited the “M760Li xDrive” with a maximum of 600 horsepower output from the V-12 engine. “M760Li xDrive” has a stereo camera mounted toward the front side. When a sensor detects a pedestrian around the vehicle, the pedestrian is displayed in a red frame to alert the attention of the driver.