Articles for ITS market MaaS (Mobility as a Service) "town development." Full-scale promotion for a national project

220 seats of Regional Collaboration Meeting on Mobility Services were fully occupied by the pre-reservation stage. 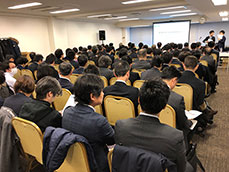 The Regional Collaboration Meeting on Mobility Services was held at the conference room at JR Station Tokyo. 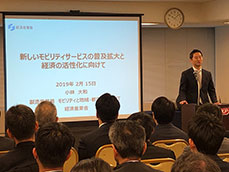 At 10:00 a.m. on February 15, 2019 the conference room near JR Tokyo Station was filled with businesspeople. The 220 seats prepared had already been filled two weeks prior to the opening of the internet pre-reservation.
The name of this event is "Regional Collaboration Meeting on Mobility Services". It was sponsored by the Ministry of Economy, Trade and Industry (METI).

Dr. Haruo Ishida, emeritus professor, University of Tsukuba, emphasized that "There have been various cooperative meetings, including EV (Electric Vehicle) and automated driving, and I have been chairing these meetings. However at this time the handling of mobility services is an urgent need and needs to become popular in Japan. Therefore serious discussions are needed."
Next, Mr. Hirokazu Kobayashi, Director of the Automobile Division and Counselor, METI and Mr. kyoji Koramochi, Director of the Ministry of Land, Infrastructure, Transport and Tourism (MLIT), Policy Bureau, Public Transport Policy Department, Transport Planning Division, explained the national policy and willingness to deal with the issue.

In addition, representatives from Maebashi City in Gunma Prefecture, Yokosuka City in Kanagawa Prefecture, Tsukuba City in Ibaraki Prefecture, Eiheiji-cho in Fukui Prefecture, Minamisoma City in Fukushima Prefecture and Miyoshi City in Hiroshima Prefecture (and Mazda) introduced new traffic policies that into account the traffic conditions and characteristics of each region.
Subsequently NTT DoCoMo, JR-EAST and SOFTBANK who are private companies described the details of new transportation system services.
What prompted holding this timely collaboration meeting?

In recent years the automotive industry has often heard the phrase "Revolution once every 100 years."
Their comment is based on the forecast that R&D on technologies such as EVs, automated driving, and connected cars will be integrated and connected cars will be integrated and implemented socially as Mobility as a Services (MaaS). MaaS aims to provide more comfortable and fulfilling lives and more efficient management for enterprises through services that combine a variety of mobile efficiencies.

Typical examples of MaaS include “Ride Sharing” which is rapidly becoming popular in the United States, China, Southeast Asia, India and other countries.
Ride sharing services include not only automobiles but also bicycles and electric scooters within the past 1 or 2 years. However price competition among service providers, law non-compliance issues and troubles with local residents have already occurred causing increased provider bankruptcies.
In January 2018, Nordic Finland enacted laws requiring the sharing of public transport data including buses, trains and taxis. In response global public transport restructuring has been intensified, including the launch of services that allow public transport to be used at a fixed monthly rate.

METI analyzed these trends worldwide and held an expert meeting at MaaS in 2018. In October of the same year the interim consolidation was announced.
In addition the MaaS action plan is scheduled to be implemented nationwide in FY2019. The "Regional Collaboration Meeting on Mobility Services" is the kick-off. 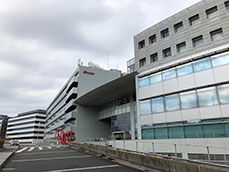 NTT DoCoMo R & D center which is the center of YRP 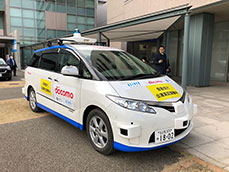 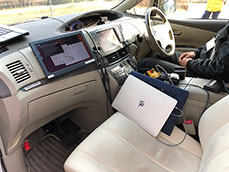 Inside the vehicle. An auxiliary brake is equipped in the passenger’s seat area. 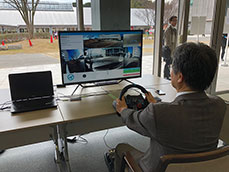 A system for remotely operating the vehicle. 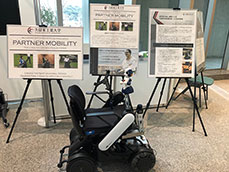 The announcement of business model and research results using personal mobility were remarkable. 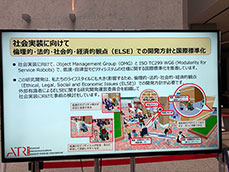 Introduction of technologies using Wi-Fi to prevent electric chairs from colliding with crowds.

Local governments participating in the Regional Collaboration Meeting on Mobility Services have already taken action in anticipation of their participation in the FY2019 Action Plan.
Among them Yokosuka City attracts attention. "Yokosuka × Smart Mobility Challenge" (From January 24th to 26th, 2019) was held at Yokosuka Research Park (YRP) where NTT DoCoMo and other telecommunications companies are included in the Advanced Technology Research and Development Center.
It is an attempt to transform Yokosuka into a town that is easier to live in by collaborating with companies and organizations in the vicinity of Yokosuka such as researchers at Yokohama National University and Keihin Expressway a local transportation company.
In the field various mobility services utilizing communication technologies such as 5G were exhibited as prototypes.

For example, in a level 4 automated taxi developed jointly by the venture company Tier IV and NTT DoCoMo the vehicle ran on a public road on the YRP site without anyone sitting in the driver's seat. The equipment installed in the YRP facility is used for the operation and operations can be carried out by remote control. Such public roads have already been tested in Nagoya and elsewhere, but this time with the permission of the local police it became possible to drive at an upper limit of 40 Km/h. The passenger's seat area is equipped with a brake pedal for an emergency stop and the system administrator always rides in the passenger's seat during operations.

In addition an efficient bus and taxi dispatch system in which NTT DoCoMo collaborated with the venture company "Mirai Share" from Future University Hakodate was introduced. There were various technical exhibitions such as technology using Wi-Fi for avoiding personal mobility of electric wheelchairs and similar devices traveling in the room from contacting pedestrians.
In addition various symposiums and idea sessions were also held to enable citizens to attend the seminars.

Various attempts will begin in fiscal 2019, including in Yokosuka City for new mobility services in Japan.