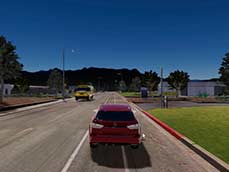 In December 2020, there was an award ceremony for an interesting event leading to the future of autonomous driving.

Fellow at Advanced R&D and Engineering Company of Toyota, Mr. Seigo Kuzumaki, who is also the chairman of the conference committee and the program director for the government’s SIP Automated Driving Systems, pointed out the reality of the automotive industry, "We now have an urgent need to develop human resources on AI technology."
The automotive industry is entering a once every 100years "revolutionary period”. Engineers involved in software are increasingly important in the research and development of connected and autonomous driving technologies.

Under these circumstances, the AI challenge of autonomous driving was intended to attract not only the existing automotive industry, but also IT, and electrics-related industries. Also students interested in developing future automobiles with autonomous driving technology.

On March 24-25, 2019, the first tournament was held at the Chiba Experiment station (inside the Kashiwa Campus), which is affiliated with the Institute of Industrial Science, University of Tokyo.
The second tournament was scheduled to be held in June 2020, the same program as the 2019 conference, but it was cancelled due to the spread of the coronavirus infection.
Instead, an online competition was proposed.
The finals were held on September 23-November 6, 2020 by the top teams from the online simulation qualifying round, and the top teams from the 2nd AI Edge Contest, a collaborative competition.

The competition was designed as a case study for food delivery service. This is because many people are expecting deliveries by self-driving cars considering the viewpoint of logistics and disaster prevention during COVID19.
In this competition, the task was to deliver the ordered items quickly and politely without damaging the items while monitoring and clearing some issues with the autonomous vehicle.

According to the scenario, the participants should pass through checkpoints on a predetermined route.
The maximum speed is 30km/h, and the time limit is 5 minutes, beyond which you will be disqualified.
Collision with ground objects, vehicles, or pedestrians on the map also means disqualification. To avoid obstacles, you can pause or avoid without stopping while driving.
The software is an open source Autoware. Participants created source code to clear the driving scenario. After validating in the local environment, the source code was uploaded to the online environment.
However, the appearance timing of objects, vehicles, and pedestrians was set differently in the local environment and online environment, in order to enhance the competition.

The results were as follows.
The best award went to Team gatti from NTT Data Automobiligence Laboratories.
The time is 112.965 seconds.
The excellence prize is Shallow Learners from Toyota Motor (129.546 seconds).
The third prize, tomo123 from Sun Electronics (149.997 seconds).

Team gatti said, "We applied the techniques we normally used in our regular work. Taking a non-stop drive approach to avoid obstacles was effective in reducing time."
Shallow Learners is from Toyota Motor Corporation, but they are not engaged in developing autonomous driving or related research.
Tomo123 was surprised and said, "I was not expect to win at all." Unlike other prize teams, Tomo123 was an individual entry, and was the first time working with Autoware. It was quite a challenge at first, but he was able to take advantage of his previous IT-related knowledge to successfully win third place. 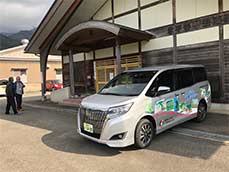 The on-demand transportation "Kinsuke Taxi" in Eiheiji-cho. Photographed by the author 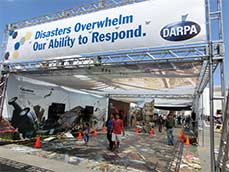 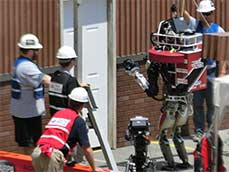 The author was also involved in the process of determining the implementation guidelines for the Autonomous Driving AI Challenge.
Here are the two proposals from the author.

The first one is to base testing on social problems. Therefore, the food delivery scenario was selected.
As an example, there is a food delivery service using on-demand traffic, which is practically operating in Eiheiji-cho, Fukui Prefecture. Toyota's minivans are typically used as a means of transportation for the elderly on their way to shopping or going to hospital. However, due to COVID19, they started running a limited-time business for delivering lunch boxes and other items from local restaurants to private homes. This on-demand transport uses a system called private paid passenger transportation, in which local residents serve as drivers.
Furthermore, in Eiheiji-cho a demonstration test of autonomous driving using a promenade on the site of an abandoned railway line is currently underway. It is supported by the Ministry of Economy, Trade and Industry and the Ministry of Land, Infrastructure and Transport. From the latter half of December, 2020, the system was put into practical use on about 2km section of the total 6km route which is mostly used for sightseeing to Eiheiji.
The author has been involved in various activities in the town as an "evolution ambassador" for the new transportation system in Eiheiji-cho.
Based on these actual experiences, he came up with the idea of applying AI to the contest, with the image of combining on-demand traffic and autonomous driving into one platform.

The second proposal is for disaster prevention. In terms of disaster prevention, the DARPA Robotics Challenge, a contest with disaster robots held by the U.S. Defense Advanced Research Projects Agency (DARPA) in 2015, was used as a reference.
The author was covering the final in a suburb of Los Angeles. It was assumed that robots perform a variety emergency response tasks to the accident at the Fukushima Daiichi Nuclear Power Plant.

Generally speaking, the social demand for autonomous driving needs to be considered in two ways, an individually owned vehicle and a service vehicle that is utilized by public transportation and logistics services.
In this online automotive AI challenge, it is expected that the participants had a sense of purpose to solve social issues and not just as a software development game competition.
It will be important to keep developing autonomous driving technology, while industry, government, and academia continue to collaborate on how it reflects in society. Regardless of testing in the real world with actual vehicles or in the online virtual world, it is also critical to involve local residents to participate in these discussions.