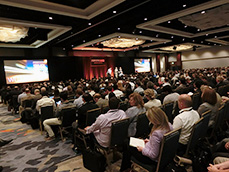 The symposium was held at Hilton Hotel, in San Francisco and many people related the automotive industry and government attended from the world. 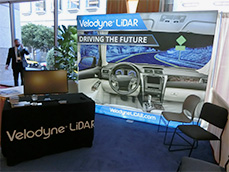 The booth of the major Laser-Lidar manufacture, Velodyne, US. 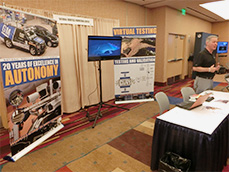 The booth below is of one of the companies providing autonomous driving technical consulting.

I covered the automated vehicles symposium again this year. The AUVSI (The Association for Unmanned Vehicle Systems International) based in the US is the biggest organization in the world regarding automated vehicles. They have a great connection with the United States Department of Defense and also have many companies and education facilities its members. They discuss the practical applications and the legislation for the unmanned aerial vehicles, the unmanned combat aerial vehicles, Drones and robots that remove a mines and other dangerous materials.

Lately their discussions regarding the autonomous car have been in conjunction with the TRB (Transportation Research Board) as division of the United States Department of Transportation. The AUVSI and TRB have been holding the “automated vehicles symposium’s” once in a year for the last five years ago and I have been covering the last four times.

The members that have joined the automated vehicles symposiums are experts who are working for car manufactures, car parts manufactures, IT, communication, and insurance companies, universities and government. The participants are increasing year by year and membership has reached about 1200 people this year. About 20% were from abroad and the Japanese the largest group at 20%. Regarding the autonomous car, the three largest Japanese car manufactures, TOYOTA, HONDA, NISSAN and the three Largest German companies, Daimler, BMW and VW are currently developing and testing.

On the other hand, Google is doing the development and the testing for the completely autonomous driving control and recently there was news that Apple has been developing the EV (Electric Vehicle) including the autonomous car as well.

The automotive industries of Japan, EU and US are paying close attention to the news they think that the American IT giants may cause the paradigm shift on the autonomous car operation and development.

At the end of April this year, a total five industry companies such as Google, Volvo, Ford, Uber and Lyft have set up the organization to press the US government to lay down a new law regarding completely autonomous driving. The organization surprised the former NHTSA Secretary (National Highway Traffic Safety Administration) was assumed as the public relations. NHTSA had announced to open the total guideline regarding autonomous driving, that is why the industry companies made the new request to NHTSA.

AUVSI’s automated vehicles symposium has been attracting the world’s attention because participants feel deeply about the US government’s movement against the autonomous cars. However what surprised me this year was that the symposium was not run as usual.

“Safety First” appeared as a topic due to the accidents experienced by Tesla Motors. 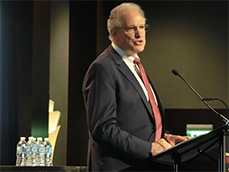 In the symposium, Mr. Anthony Foxx, Secretary of Transportation and Mr. Mark Rosekind, Secretary of NHTSA stressed the “Safety First”. Of course the US government is always concerned about the safety of the autonomous car, but they put the topic “How to Popularize” in the centre of the discussions and discussed the many kinds of risks, such as cyber security etc and they also mentioned these risks during building the autonomous car industry discussions.

However the topic, “How to Popularize” changed during the symposium and it started heading towards the topic of safety. This is not my own impression but the people who exchanged the opinion in the symposium said they had a same impression.

Why has the topic been changed? One of the reasons is the accident of the Tesla Model S. In May 2016, one forty year old man, who was driving the Tesla Model S, was killed when the car crashed into the large truck trailer. Tesla said when the accident happened, the “Auto-pilot” was working but the image recognition function had an issue and it could not recognize the difference between sky and the trailer’s colored wall. The Auto-Pilot was developed by the Tesla and Mobileye, an Israel company, but the opinions between them were different cause them both to cancelled their contracts.

After that, many different opinions have been discussed. For example,

Because of Tesla’s accident, many problems for the mass production of the autonomous cars have appeared. The US government is working to take measures. Mr. Anthony Foxx said “NHTSA will announce the autonomous car guidance at the end of this summer” which extended the original by several months.

During United Nations meetings discussing the legislation for autonomous car, it was stated that the US is accelerating making their own standards.

NHTSA is gathering the original test data of the car has autonomous car level 2.

In fact, a person who is responsible for studying in NHTSA, suggested that the contents would be analyzed in 2016 and 2017 in the speech. The legislation for the autonomous car is being discussed by Japan and the main European countries in United Nations. The WP1 for the traffic rules and WP29 for the safety and environmental standards are what they have been discussing. They would like to make US join in but US is moving to make their own regulations. The companies involved with autonomous cars should watch carefully what is going on between United Nations and the US.