In recent events, first, Honda announced its future business reforms on April 23, 2021, during the inaugural press conference of President Toshihiro Mibe. “Honda will increase the sales ratio of EVs (electric vehicles) and FCVs (fuel cell vehicles) to 100% globally by 2040.”
The sales ratio will be increased gradually from 40% in 2030, nine years from now (2021), to 80% in 2035.

Regarding 2040 as the target year, President Mibe said, “Many countries and regions around the world are aiming to become carbon neutral by 2050, including the Japanese government. We set the target for 2040, 10 years earlier than 2050, based on the assumption that the replacement demand for new vehicles will last about 10 years.”
With this announcement, one gets the impression that Honda is the most aggressive of the Japanese manufacturers in shifting to electrification at this point (May 2021).

However, looking back some time ago, Honda was not the manufacturer that emphasized the shift to EVs and FCVs, although it was active in promoting hybrid vehicles in Japan.
For example, when Honda introduced the Fit EV in the U.S. in the 2010s, the company's president at the time, Takanobu Ito, stated that “the ZEV law is the only thing that matters” and that “it will be difficult to spread EVs and FCVs for the time being if we rely on regulations and subsidies.” The ZEV Act refers to the zero-emission vehicle regulation law enacted by the State of California.

Later, Honda also conducted demonstration tests of the Fit EV in response to the Chinese government's electric vehicle policy in Guangzhou and other cities where Honda has a production plant. But Honda executives at the time positioned this as "just a means to maintain relations with local government regulations in mind.”

As for FCVs, when the Japanese government launched the "First Year of a Hydrogen Society" in 2015 to popularize ENE—FARM (Energy farm) for home use and FCVs, the "FCX Clarity" was mass-produced following the Toyota "MIRAI".
However, by the latter half of the 2010s, the number of FCX Clarity leases sold was extremely low, and Honda was no longer interested to launch its own promotion to expand the use of FCVs.
In October 2020, Honda announced that it officially withdrew from Formula One and that it would drastically review its internal development system to become carbon neutral, setting the stage for the current "100% EV/FCV by 2040."

The hydrogen engine being developed by Toyota. Source: Toyota 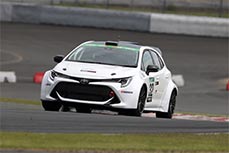 Strategies of Nissan and Toyota

Next is Nissan. Nissan mentioned the mass production of e-POWER EVs and series hybrid vehicles globally from 2021 in its financial report on May 11, 2021.
In the report, the company said that e-POWER will be introduced in X-trail and Qashqai to support CAFE (Corporate Average Fuel Economy) in Europe.

With regard to EVs, Nissan is already producing many models in response to the NEV (New Energy Vehicle) regulations in China, and the company is strengthening its stance to promote the ARIYA as a global strategic EV from 2021.
Makoto Uchida, CEO of Nissan, insists on the strength of Nissan's EV strategy. "We will make use of our EV development know-how accumulated by Leaf over the past 10 years.
However, he refrained from answering questions about FCVs and the development of hydrogen-powered engines. He instead emphasized the importance of optimizing Nissan's business in the Renault-Nissan-Mitsubishi Alliance to "put a high priority on returning to profitability," given the fact that the company's financials are still in significant deficit.

On the other hand, when Toyota announced its financial results on May 12, 2021, its plan to carbon neutrality was also presented.
In the report, the company stated that it would aim for carbon neutrality in 2050, and sell a total of 2 million EVs and FCVs out of 8 million electric vehicles, including hybrids, globally in 2030.
This is a high target, about twice as high as the future projection for the spread of electric vehicles, which was revised in 2017 and 2019.
Before the press conference, the company also announced that it would use internal combustion engines such as gasoline vehicles to accelerate the development of E-FUEL, a synthetic fuel that uses hydrogen, and hydrogen engines that use hydrogen itself as fuel.

The Game Changer of ESG Investment

These manufacturers' aggressive investments in the shift to electrification and the intensified development of various next-generation fuels are certainly moves that take carbon neutrality into account.
However, through my interviews with various parties, I have the impression that the rapid changes in the world regarding carbon neutrality were not expected by the manufacturers, and that they are desperately trying to catch up with these movements.
In other words, the industry and manufacturers themselves have the impression that the Japanese automobile manufacturers are lagging behind the changing times.

The Ministry of Economy, Trade and Industry (METI) defines ESG investment as "investment that prioritizes environmental, social, and governance factors in addition to traditional financial performance.
The concept of evaluating the sustainability of corporate management has become widespread, especially among institutional investors who manage large assets such as corporate pension funds over the long term. In addition, as a benchmark for long-term risk management (ex. climate change) and new revenue opportunities assessment, the UN Sustainable Development Goals (SDGs) has been in the spotlight.

In the past few years, there has been a common theme that the automotive industry is facing a "once-in-a-century revolution" due to the simultaneous development of various technological innovations such as CASE (connected, automated driving, new services such as sharing, and electrification) and MaaS (mobility-as-a-service).
Therefore, developers inevitably tend to be more interested in IT-based-connected and automated driving.

On the other hand, with regard to fuel efficiency and CO2 reduction, we have drawn a roadmap for the gradual electrification of powertrains based on the efficiency improvement of internal combustion engines, in response to the European CO2 regulation, the US ZEV law, and China's NEV regulation.
However, the impact of ESG investment has expanded rapidly on a global scale. The "Green Strategy" formulated by the Japanese government in December 2020 has become a policy with "ESG investment" oriented.
With the emergence of the new game changer of ESG investment, Japanese automakers are required to shift towards the new era.