Articles for ITS market Will carbon neutrality accelerate the trend to strengthen LCA (Life Cycle Assessment)? 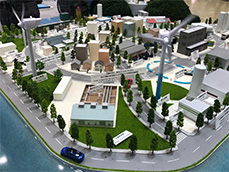 A model of a community that utilizes renewable energy.
Exhibition by the Ministry of Economy, Trade and Industry. Photographed by the author.

Chairman of Toyoda expresses strong will for LCA.

In the conference, he introduced of the different activities the automotive industry has conducted in Fukushima, Miyagi and other areas that were severely affected by the disaster over the past 10 years and towards the future.
He also emphasized the importance of LCA, in response to Suga Prime Minister Administration's plan to achieve carbon neutrality by 2050. LCA is the concept of life cycle assessment that evaluates a product over a long period of time, from the extraction of raw materials through to processing, transport, use and disposal.
In view of carbon neutrality in automobiles, the following processes are considered; extraction of crude oil, transportation to Japan, refining and processing into fuel. Also, the raw materials, parts manufacturing, transportation, and final assembly in Japan And then car transportation to dealers and customers, resale as used cars several times, and in some cases, exporting used cars overseas. The LCA must be considered over a long period of time, more than 10 years, until its disposal in foreign countries.

In the past, automakers recognized LCA from the perspective of Corporate Social Responsibility (CSR). While in recent years, attention to ESG investment, which considers environmental, social, and governance factors in addition to the traditional financial status, has grown rapidly together with the importance of LCA.
In respect to this, Mr. Toyoda, as the head of JAMA, indicated that "In order to realize the government's green strategy, it is necessary to develop mobility from renewable energy at an early stage. In order to do so, it is inevitable to review the manufacturing industry on the premise of LCA." 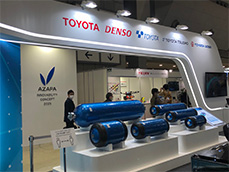 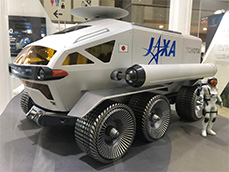 A prototype of the “Lunar Cruiser”, a fuel cell-powered lunar vehicle. jointly developed by Toyota and JAXA. Photographed by the author.

Mr. Toyoda warned the entire industry that if Japan were to continue with the status quo without actively transforming to green energy. "It will no longer be possible to make cars in Japan"..

He took the Toyota Yaris as an example, saying that if production in Europe emits less CO2 than production in Japan when considering LCA, as a result, the Yaris for the domestic market would be imported from, as an example, France.
Then, in a worst-case scenario, he referred to an estimate by JAMA that 700,000 to 1 million jobs will be affected or lost out of the 5.5 million people involved in automobile related industries in Japan.
Mr. Toyoda also made his annual visit to the Tohoku region in early March 2021. During the visit, he exchanged opinions with local officials at the Fukushima Hydrogen Energy Research Field in Namie Town, Fukushima Prefecture. He expressed his enthusiasm regarding the ambition of achieving a carbon neutral society. "The Automobile industry is right in the middle of carbon neutrality".

Toyota, within the three stages of making, transporting, and utilizing hydrogen, will promote a new business model for the utilization of hydrogen, examples may include the passenger car "MIRAI" and the small fuel cell truck jointly developed with Hino Motors.
In addition, the company intends to implement a CO2 reduction plan based on the LCA concept, including its own plants and those of its suppliers.

What we need is to optimize the "number of cars".

Looking at the announcement by JAMA and Toyota's strategy on hydrogen, it reminds me about one fact, the "number of cars". I think it is important to take a comprehensive perspective on carbon neutrality based on LCA.
The current discussion is only about the conversion of powertrains from gasoline to hybrid type, or to plug-in hybrid vehicles, EVs (electric vehicles), FCVs (fuel cell vehicles), and the implementation of LCA during the manufacturing.

Even if electric vehicles become popular, in order to protect the 5.5 million jobs in Japan's automobile-related industries, the total production volume needs to be maintained at the current level of 5 million units per year. However, the most effective way to achieve carbon neutrality in the transportation equipment sector would be by reducing the volume of production.

The old way of thinking is that if the production shrinks, the balance between market demands will collapse.
Fortunately, recent development on network connectivity and new services such as ridesharing have made it possible to have cars in the right place at the right time.
Even if a passenger car is used for one hour every day, the usage rate is only 4% (1/24 = 0.04).

Ridesharing services, such as Uber and Lyft in the U.S., have expanded rapidly providing more effective use of passenger cars, and the same demand has grown in China and Southeast Asia.
In fact, it is possible to optimize the "number of cars" in society at some level with current technology, which should help to make a proper plan on production.
In reality, cars are sold as a one-time-fee based business. Even with the widespread use of sales methods such as residual value loans, there is no upper limit to the number of vehicles sold. Mass production and mass consumption are still mainstream, "the more vehicles sold the better".
At present, no automaker has indicated when it will shift to an automobile production system based on demand optimization. It is believed that further improvements should be made on business plans in the automobile industry in order to achieve carbon neutrality.