Articles for ITS market Utilization vehicle data during disasters

Lack of information in disaster

In August 2021, torrential rains hit many parts of Japan. This was due to the linear rain band. The Japan Meteorological Agency and the Ministry of Land, Infrastructure, Transport and Tourism will hold a joint press conference when a linear rain band is predicted to occur to warn people to take action to protect their lives.

The Cabinet Office has published "Evacuation Information" for various disasters such as river floods, landslides, storm surges, tsunamis, and nuclear disasters, and the revised version was released in May.
However, there is no detailed description of the evacuation method according to the living conditions of the evacuees and the on-site situation at the time of disaster.

In general, when roads are flooded, cars are at risk of floating in the water and becoming impossible to drive.
Therefore, there is a call to avoid using cars. Alternately, the specific decision not to use a car is left to the individual.
Even if it is possible to drive, if some roads are closed due to flooding or landslides, or if there is extreme traffic congestion, it may not be possible to reach the evacuation center.

Since then, a few R&D and demonstration tests have been conducted in Japan on the linkage between smartphones and in-vehicle equipment by Google and APPLE, as well as on next-generation Intelligent Transportation Systems (ITS) using 5G.
However, there is not much experience in the collection and analysis of information using vehicles during disasters, and its utilization based on that information.

Additionally, in recent years, under the concept of Mobility as a Service (MaaS), discussions have begun on a data platform to share information among private cars, public transportation, medical institutions, and local governments.
Although Toyota and NTT have announced that they will begin discussions on the specific creation of a data platform, it is unclear whether this will become a substantial standard in Japan. 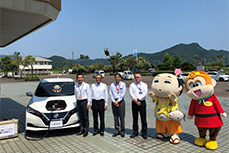 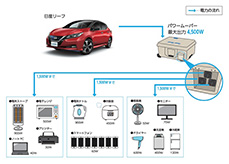 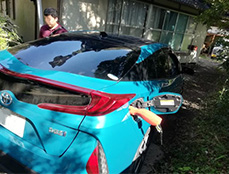 In recent years, cars have been getting attention as a means of supporting disaster victims.
EVs (Electric Vehicles) and FCVs (Fuel Cell Vehicles) will be used as temporary power sources in times of disaster.
For example, Nissan has been working on the Electrify Japan "Blue Switch" since May 2018. More than 100 local governments and local Nissan dealers across Japan have signed cooperative agreements to share EVs and other vehicles free of charge as power sources in times of disaster.

In the case of Toyota, the company dispatched 75 electric vehicles to respond to a disaster in Chiba Prefecture, where a typhoon in September 2019 caused a massive power outage of about 930,000 homes, in response to a request from the government and Tokyo Electric Power Company.

In the future, as electric vehicles become more widespread, there is a possibility that electric vehicles owned by companies and individuals will be used as emergency power sources for the entire region.
To achieve this, it is necessary for local governments to take the lead and for automobile manufacturers and telecommunication-related companies to back them up. This will increase the need for the establishment of a comprehensive information management system in the times of disaster.