Tendency to invest in services rather than technology 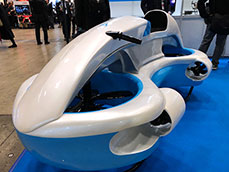 Full-scale model of "Flying vehicle" shaped like a watercraft. 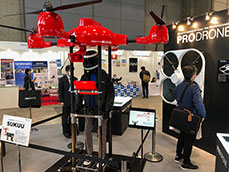 Display images of hanging and moving people with a large drone.

The basic technology of "Flying vehicles" has many common requirements with small drones.
Specifically, both of the aircraft structures are capable of vertical take-off and landing (VTOL: Vertical Takeoff and Landing). It is considered a multicopter and drives multiple propellers with a motor. Also in order to extend the flight distance it is desirable to develop a motor with low power consumption and a small-sized, large-capacity storage battery.

From this point of view the current state of the drone market does not provide much next-generation technology or innovation. Therefore the impression is there are more companies rushing to respond to the service business side rather than technology.
In other words people, goods and money are flowing into business segments that use the current technology due to lack of drone technology innovation. 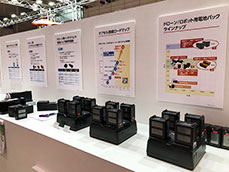 The biggest technical issue is still overall battery performance. It is common to use a lithium ion secondary battery in a drone. As a battery brand Chinese DJI, the largest drone manufacturer uses its own battery. Among Japanese manufacturers Maxell also has a large share.

According to a Maxell representative, Maxell's battery stacks laminated battery cells to form battery modules and battery packs. As demand for drones are still low it has a large, common share with batteries used in nursing care robots.
Maxell's battery pack for drones consists of 6 battery cells in series, with a voltage of 23.12 VDC and the battery capacity of 127 Wh. In consideration of flying the weight is designed to be as light as 0.8 kg.
However the flight time of medium-sized drone even when using the latest battery is still short. For example the flight time of a medium-sized drone with six battery packs and a total weight of 5 kg with a transportable weight of 5 kg is only about 15 minutes.

A drone designer who uses Maxell's battery notes that "Drone flight control is only used for motor control and therefore not technically difficult. The problem is batteries, however battery performance is not expected to increase anytime soon."

He also pointed out that, "After all, I can only build a business within the scope of the current performance. The main fields are surveying, maintenance and inspection. The logistics hurdles are quite high." 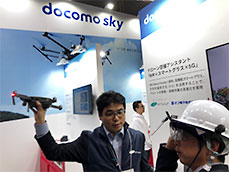 NTT DoCoMo exhibited a system for grasping the flight status of a drone by mounting a camera monitor on its head. 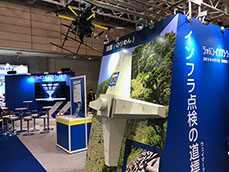 If they do not use a drone it takes more time and labor, such as a worker visiting a high-level facility. It is also possible that the worker may encounter a dangerous situation depending on the weather or other conditions. Concerned about such a harsh working environment securing workers has become more difficult every year.
In view of such social conditions and industry facts Japan Infra Waymark aims to conduct efficient maintenance inspections by drones in shorter time periods.

A person in charge of Japan Infra Waymark said, "Drone can currently only fly about 15 minutes at a time. However there are only a few places that actually need checking in various infrastructure facilities and we have the know-how and basic data for pinpointing them." He emphasized the business model compensates for the drone's weaknesses.

A new way of life for Quasi-Zenith Satellite Michibiki 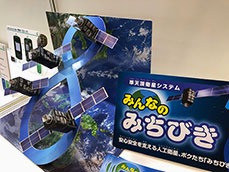 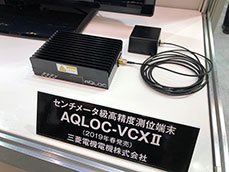 An important part of the flight survey related to maintenance and inspection is understanding the position of the drone. GNSS (Global Navigation Satellite System: Satellite Positioning) is the method used. In Japan the use of the quasi-zenith satellite system “Michibiki” has made it possible to maintain high GNSS positioning accuracy when compared to other countries and regions.

This position accuracy is a numerical value within the plane and the height accuracy is typically about three times less accurate in the plane.
Therefore, in the drone case accuracy of the height, even in the centimeter class is about 18 to 36 cm. Therefore it is necessary to factor these height errors in when carry out the flight maintenance inspection.
Mitsubishi Electric has released AQLOC for high-precision positioning terminals compatible with centimeter-class satellite positioning, and is used for unmanned agricultural tractors. A second-generation AQLOC II, with improved performance will be launched this spring.