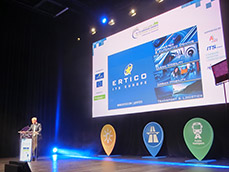 ERTICO spokesman presented the opening ceremony of ITS EU 2017. 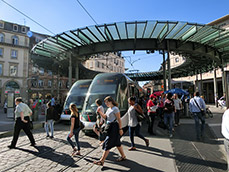 The LRT of Strasbourg at the ITS EU 2017 venue.

The name is “the ITS EU 2017”, but the world automobile industry is being led by Europe companies such as the German 3 (Daimler, BMW, VW) as well as (Bosch, Continental) and parts manufacturers, and that is why about 3000 people from all over the world including Japanese companies participated to explore the latest trend of the industries.

Speaking of Strasbourg as a venue, it is world famous for its success in compact city policy, utilizing the next generation type of tramway LRT for urban transportation. This time I stayed for a week and purchased a one-day pass ticket of LRT for 4.5 euros. It was very helpful, for example I took the LRT from the hotel area to the venue, from Strasbourg Central Station to the city center and so on. However, during my stay, unusual heat waves are flowing in Europe, and it is extremely hot so that the outdoor temperature reached 35 degrees even at 7 pm, the air conditioner in LRT was weak at cooling, and I could not get comfortable.

Automated driving is spreading in many European countries. 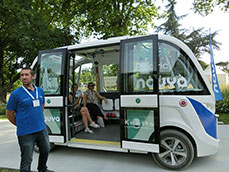 The shuttle service demonstration of fully automatic operation was carried out by the French company, NAVYA. 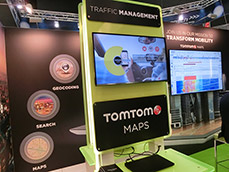 The booth of the Netherlands company, TomTom, which is aiming to be the de facto standard in high precision three dimensional maps.

Regarding CAD, the EU has been taken it up as the most important issue among the “Horizon 2020” technology development policies from 2014 to 2020, and the 6.3 billion euro which is 7% of the total budget of Horizon 2020 is spent for ITS. There are various other technological development funds that the EU has dedicated for ITS, and it is a driving force for practical application of ITS in Europe.

For automated driving, they are aiming for early practical use of platooning vehicle of long-distance trucks crossing the border of European countries. The platooning trucks became a major issue even at the meeting by the Minister of Transportation and Transport of the EU countries held in Amsterdam, the Netherlands in April 2016, and in the same year a demonstration test on a highway was conducted. After analyzing the basic data, from 2018 to 2019, they will carry out demonstration tests in a wide area based on commercial use after 2019.

Meanwhile, the company named NAVYA in France and the automatic operation department of US local motorists who has a development base in Berlin Germany also are conducting demonstration tests of automatic operation shuttles in various parts of Europe. Regarding driverless type of fully automatic operation, each local government responds as a local rule at present. As early as possible for the EU, they are planning to standardize the technology in the automatic shuttle service and develop laws.
Regarding the high-precision three-dimensional map (HD map) which is an important factor in automatic operation, I found that here in Germany the German 3, (Daimler, BMW, VW) are major shareholders. TomTom in the Netherlands, which is exclusively providing map information to Apple, are competing very hard to become the de facto global standards in the underground. 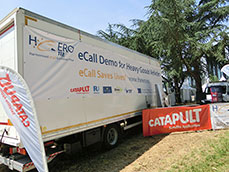 As mentioned above, the autonomous driving is becoming the leading role in Europe as well as ITS in various parts of the world and the technical development of those are gaining much attention. However, the eCall is one of the most important issues in ITS in Europe in recent years.
The eCall is the system that when there is a serious car accident on the street, a notice (call to 112) requesting emergency response equivalent to 911 in the US is automatically issued when a manual button in the car is pressed or air bag is activated.

To implement the eCall, utilizing the EU's proprietary satellite system called Galileo was supposed to be the basis of the project. However, it took time to summarize the views of European countries on the operation of the Galileo and the revision of the eCall practical road map has been repeated.
At the moment, they are aiming to start the operation from April 2018 and even in the ITS EU 2017, there were the eCall related announcements in several technical sessions. I heard an explanation of the demonstration test on large truck by the eCall exhibited outdoors and I found there was a difference in the improvement situation in European countries in expanding the center "PSAP (Public Safety Answering Point)" that accepts the eCall notification call.
Also, at the opening ceremony and the closing ceremony, they did not mention the current situation and future of the eCall and I felt a little uneasy about the implementation of the eCall from April 2018.